Bulldogs even score with Canfield after previous loss 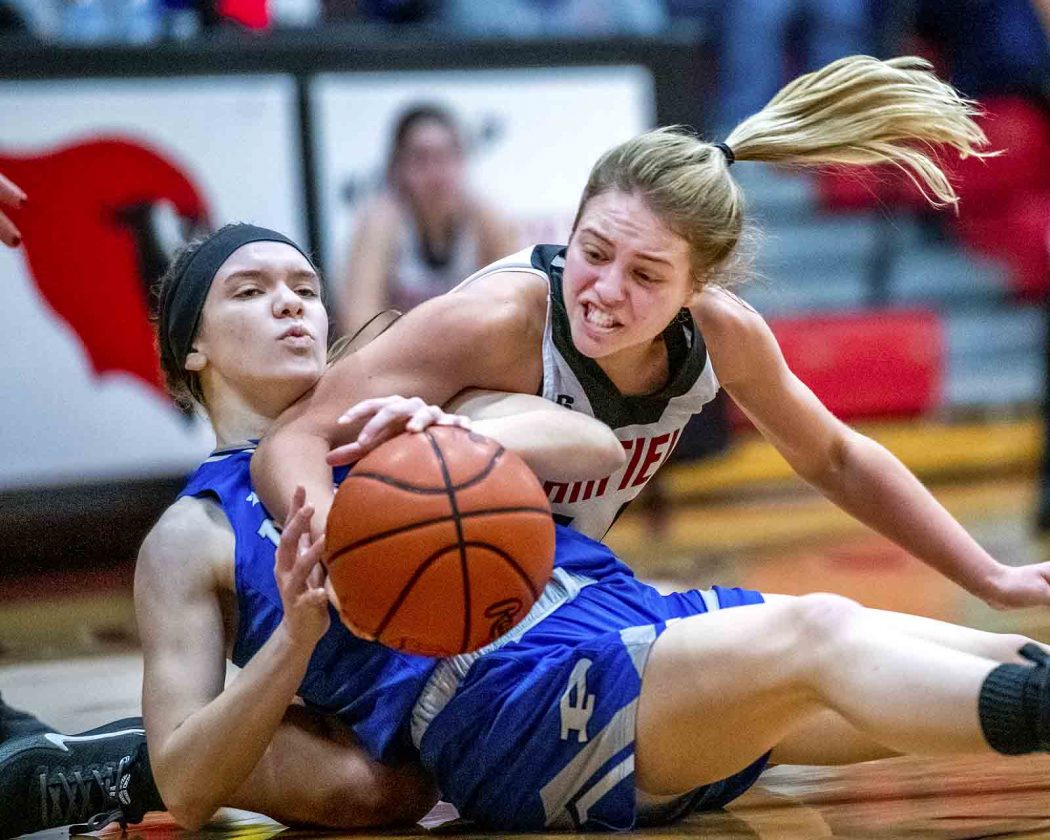 Correspondent photo / Dianna Oatridge Poland's Connie Cougras (left) and Canfield's Summer Sammarone (14) battle for possession of the ball during their game in Canfield on Thursday.

The Bulldogs, who improved to 20-2 on the season, flipped the script from the first meeting with the Cardinals back on Dec. 28. That night the Cardinals walked out of the Bulldogs gym with a hard-fought 40-36 win.

“Tonight was all about revenge,” said Bulldogs coach Nick Blanch about Thursday’s meeting. “That was our focus. Just for the fact that we felt that we didn’t play our best earlier in the year. We knew they were a good team, and I didn’t feel we put our best foot forward that night. Tonight that was our redemption.”

Bulldogs guard Jackie Grisdale was motivated by the fact that Canfield gave Poland one of their two setbacks this season.

“That really motivated us to come out and play hard,” Grisdale said. “We didn’t want them to get us again. And we need the momentum going into the tournament.” 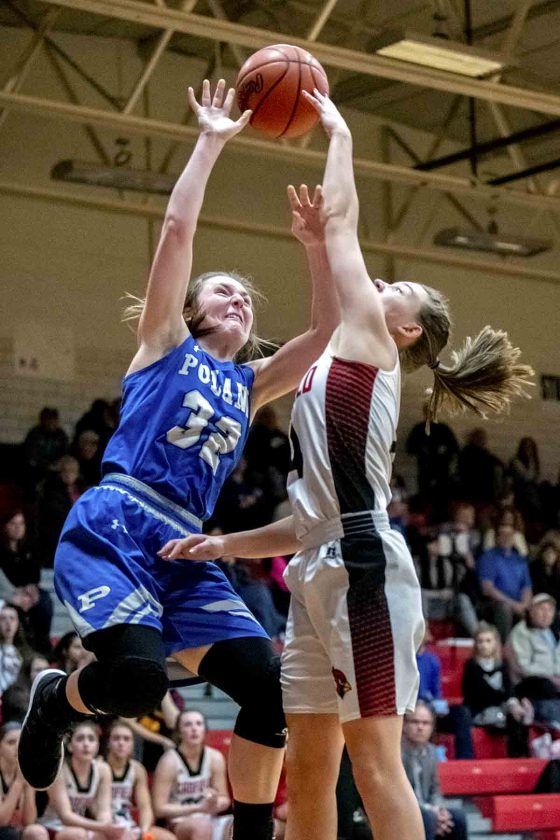 Correspondent photo / Dianna Oatridge Poland's Morgan Kluchar (32) puts up a shot as Canfield's Aiden Orlovsky (4) defends during their game in Canfield on Thursday.

Cardinals coach Matt Reel said his team got to every 50-50 ball in the first meeting. That didn’t happen Thursday.

“They got to every loose ball,” Reel said. “They got every rebound that they got their hands on. They were aggressive the first 18 minutes until we finally started playing like we have all year.”

The Bulldogs grabbed their first lead of the contest 3-2 at the 5:40 mark of the first quarter when Grisdale scored her first of eight baskets from the field. From that point on, the Bulldogs would not surrender the lead. Their defense would keep fierce pressure on the Cardinal ball-handlers all night as they built a 13-8 lead at the end of the first quarter.

“We love playing defense because it’s one of the times we can trust each other,” Grisdale said. “We know we are going to make our rotations. We like turning defense into offense, which you saw (tonight). We work on it a lot in practice.”

It took Canfield awhile to adjust to Poland on Thursday, Blanch said.

“We kept changing things up so that they couldn’t get comfortable,” he said. “They adjusted well as the game went on, but our defense is our backbone. It’s what we pride ourselves on.”

They would continue to pull away in the second frame as the Bulldogs started the period with a 9-0 run, holding a 22-10 lead at the 4:50 mark of the stanza. They would go on to hold a 14-point, 28-14 advantage at the intermission.

It appeared the Cardinals would rally to start the second half when Cardinals guard Marissa Ieraci knocked down a 3 less than a minute into the quarter. But the Bulldogs were able to quickly block the Cardinals from taking the momentum as they closed the period with a 39-24 lead.

The Bulldogs began the fourth quarter with a 7-0 run courtesy of two 3’s and a free throw by Grisdale to take a 46-24 lead with 6:20 remaining in the contest. The Cardinals showed their mettle as they closed the deficit down to 13-points with a 9-0 run to make it 46-33 with just a couple minutes remaining in the game. However, the Cardinals ran out of time as they could not get any closer than the 10-point final margin.

“It was a little stressful, but I had faith in our team and our defense that we were going to pull through and we knew what we needed to do under pressure,” Grisdale said.

Reel said this game prepared his team for the postseason.

“I think there is a lot we can take from it,” he said. “I think our young kids learned about the intensity you need to have every night and come out and play.”

The Bulldogs starts tournament play next Thursday at home against the winner of Saturday’s Struthers – Niles game in a Division II sectional bracket final. The Cardinals have a quick turnaround as they host Kent Roosevelt this Saturday in a Division I sectional first-round contest.

The Boardman High School girls bowling team will be trying to qualify to the state tournament for the fifth time on ... 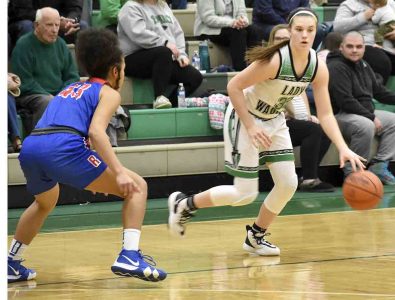 Cardinals pull away from CF

CANFIELD — It was a sluggish start for both Canfield and Cuyahoga Falls in their Division I sectional bracket ... 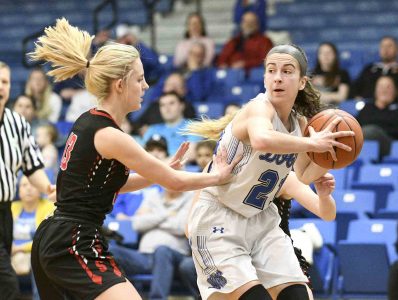 On to the district