¯ AUSTINTOWN FITCH 71, AKRON EAST 66 (OT): AUSTINTOWN — Akron East drained a long 3-pointer to send the game to overtime, but it was the Falcons who came out on top.

Devin Sherwood led Fitch with 20 points. Todd Simons followed up with 17, and both Devin Chaney and Evan Sahli added 13 points.

The Falcons (8-8) led at half and fought off a comeback from the Dragons.

¯ SPRINGFIELD 71, LOWELLVILLE 64: NEW MIDDLETOWN — Evan Ohlin scored 30 points for the Tigers in a win over Lowellville.

¯ SOUTH RANGE 34, STRUTHERS 32: BEAVER TOWNSHIP — The Raiders outscored Struthers 11-6 in the fourth quarter to pull out an upset victory over the Wildcats.

¯ SPIRE 61, CHANEY 54 (OT): GENEVA — The Cowboys traveled up to Ashtabula County to take on the SPIRE Institute and fell in overtime.

Chaney held SPIRE to one point in the second quarter to go into halftime with a 22-19 lead.

Cameron Lawrence and Travis Easterly led the Cowboys with 13 points each.

¯ BOARDMAN 75, CANFIELD 54: CANFIELD — Boardman moves to 16-1 after an All-American Conference win over Canfield.

¯ JEFFERSON 64, HUBBARD 49: HUBBARD — Jefferson scored 41 points in the second half to get the win over Hubbard.

Bobby Ray scored a game-high 22 points to lead the Falcons.

LaBrae outscored the Leopards 14-4 in the fourth quarter to pull away.

Keaton Baker scored a game-high 17 points for the Golden Eagles.

¯ WEST BRANCH 51, CANTON SOUTH 41: BELOIT — The Warriors clinched a share of the Eastern Buckeye Conference title with a win over the Wildcats with two league games remaining.

This is the first league title in 20 years.

Reese Leone and Nick Everett each had double-doubles to lead West Branch (15-3, 9-1 EBC). Leone had 12 points and 10 assists, while Everett had 14 points and 10 rebounds.

¯ CARDINAL MOONEY 72, HOWLAND 61: HOWLAND — Michael Pelini had a game-high 23 points to lead the Cardinals past the Tigers.

¯ COLUMBIANA 55, SOUTHERN LOCAL 46: SALINEVILLE — The Clippers outscored the Indians 34-17 in the second half to pull away in this Eastern Ohio Athletic Conference game.

Sean Whitehead had 13 points, while Matt Mazei put in 12 and Dalton Whitehair added 11.

¯ CARROLLTON 55, SALEM 47: SALEM — Adam Cheney had a game-high 30 points to lead the Warriors past the Quakers in this Eastern Buckeye Conference game.

Michael Davis and Ryan McCullough combined to score 42 points for Lisbon, which improved to 8-10 overall and 5-5 in the Eastern Ohio Athletic Conference. Davis led the way with 23 points, while McCullough contributed 19 points, six rebounds and six assists.

East Palestine got 24 points from Johnathan Bertovitch, but dropped its records to 3-13 and 3-8. 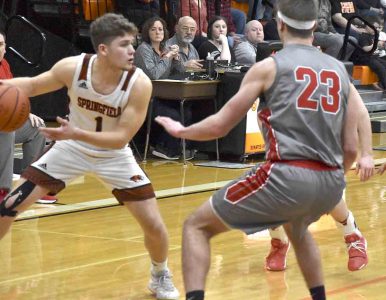