¯ CANFIELD 35, POLAND 33: POLAND — In an old-fashioned, low-possession, tight-scoring contest, the visiting Cardinals edged the Bulldogs in a non-league contest Saturday.

The final point differential was the largest period-ending margin of the game, as the teams were knotted at 10 after one period. Canfield led 15-14 at halftime and the score was tied at 22 entering the final eight minutes.

The Cardinals were 12-for-29 from the field (41.4 percent), 5-for-14 from 3-point range (35.7 percent) and outscored the Bulldogs 6-4 at the free-throw line. Canfield moved to 7-5. Joe Bruno made three of Canfield’s 3-pointers and finished with 13 points, while Trey Dye scored nine points.

¯ SOUTH RANGE 52, SALEM 38: NORTH LIMA — A balanced offense allowed the Raiders to easily move past Salem in a non-league contest.

Eight players scored for South Range (7-3), led by Chris Brooks, who registered 15 points. The Raiders led, 28-15, at halftime and put the game away with a 17-11 advantage in the third quarter.

Hunter Griffith of Salem matched Brooks for the game high with 15 points.

¯ COLUMBIANA 48, LIBERTY 38: LIBERTY — Salem rallied from a fourth-quarter deficit and pulled away late in a non-conference clash with the Leopards.

Liberty (3-8) was on the verge of an upset, leading, 32-29, entering the fourth against the Clippers (10-2), but Dalton Whitehair came to life in the fourth. He scored eight of his 12 points, including back-to-back 3-pointers that gave Columbiana a 35-34 lead. Micah Dukes, who scored a team-best 15 points for Liberty, tied the game at 35, but the Clippers retook the lead moment later and never trailed again.

Adler scored nine of her game-high 20 points in the first quarter, when the Eagles (2-11) took an 18-11 lead. The teams played even the rest of the way, with each scoring 21 points. Chaney cut the lead to 28-25 to start the fourth quarter, but Hubbard held an 11-7 advantage in the final 8 minutes to secure the win.

Cazhia Jackson and Antanasia Crockett each scored 14 to lead the Cowboys (1-11).

The Cardinals (10-3, 3-1) held Fitch to just seven first-half points and held a 21-7 lead at the break. Canfield’s Grace Mangapora led the charge with 14 points. The Cardinals put the game out of reach with an 11-3 edge in the third quarter.

Emma Bartlett led Fitch (4-7) with nine points, including boht of its 3-pointers.

¯ HOWLAND 45, BOARDMAN 31: BOARDMAN — Courtney Clark scored a game-high 21 points and helped the Tigers pull away from Boardman in an AAC Red Tier matchup.

Howland (8-5) led, 33-25, entering the fourth quarter but outscored the Spartans, 12-6, in the final quarter to seal the victory. Clark was the only player for either team to score in double figures. The Tigers held Boardman to 13 second-half points.

¯ NILES 50, JACKSON-MILTON 37: NILES — The host Red Dragons hit the Rams with an 18-5 opening quarter salvo and that margin remained the same by the end of the contest.

Aneziah Fryer scored 26 points, including 12 in the first period, as Niles improved to 4-10 with the non-league verdict. Rachel Libert supplied 10 points.

Abby Spalding led the Rams with 10 points, but the visitors struggled mightily at the free-throw line by making just one of 16 attempts. Courtney Mercer added nine points for Jackson-Milton, which trailed 28-14 at half and 38-26 entering the last quarter.

¯ EAST 52, CHALKER 26: YOUNGSTOWN — The Golden Bears took care of business from the tip-off in a non-league contest against the visiting Wildcats, leading 17-2 after the first period and 28-11 at intermission.

Chalker, which fell to 1-10 overall, got 10 points from Nancy Wolfe and five rebounds and four points from Livia Rhodes.

¯ POLAND 61, LAKEVIEW 34: CORTLAND — The visiting Bulldogs broke insured the host Bulldogs could not rally from a 33-20 halftime deficit, as Poland used a 19-7 scoring advantage in the third quarter to take a 52-27 cushion into the fourth quarter.

Jackie Grisdale scored 16 points of her game-high 20 pointsin the first quarter, including all four of her 3-point field goals, as Poland opened with a 21-12 lead. Kailyn Brown added nine points for Poland, which upped its records to 10-2 overall and 7-0 in the Northeast-8 Conference.

Meg Zetterquist made a trio of 3-pointers to account for nine of her team-high 10 points for Lakeview, which fell to 1-12 overall and 1-6 in the league. Tiffany Batholomew added nine points and Maggie Pavlansky chipped in with eight.

The Leopards, who move to 12-2 overall and 5-0 in the league, useda 19-3 first-quarter scoring advantage and pushed the cushion to 31-10 by halftime and 49-16 entering the fourth period. Delia Watson added 12 points and Cianna Smith and Allyson Jones both contributed 10 points.

Campbell, which dropped to 3-8 overall and remained winless in five league contests, got eight points from Amari Rhodes and seven from India Armour-Clark.

WARREN — Boardman won both the boys and girls sides of the All-American Conference swimming Championships.

The boys scored 589.5 points to finish well ahead of second-place Warren G. Harding (317). The Spartans won nine of the 12 events, with Will Linker leading the way by taking both the 200 freestyle and 100 freestyle. Noah Basista also won mutliple events for Boardman, taking the 200 individual medley and 100 butterfly. The Spartans also won two relays.

The women scored 534 points, ahead of Canfield’s 451. Boardman’s Alexis Mihok won both the 200 freestyle and the 100 backstroke. The Spartans won five of the 12 events.

The Leopards’ Simi Moananu led the way, taking first at 285 pounds. He was one of eight placers for Liberty, which scored 175 points. Eastlake North won ith 236. Rocky River was third at 147.5. 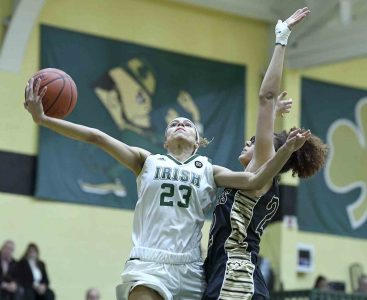