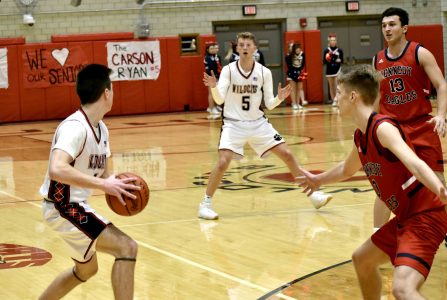 STRUTHERS — Early in a high school basketball season, coaches will always find something their team can improve.

Such was the case Saturday night at Struthers, where the Wildcats defeated John F. Kennedy 77-56 in their opener.

Both teams overcame adversity in the contest, which was a one-point game midway through the third quarter.

“We got out to a great start, had a big lead and then fizzled for about 4¢ minutes in the third quarter, and (Kennedy) stormed back on us,” Struthers coach Michael Wernicki said. “You’ve got to play for 32 minutes, and we didn’t do it against a good team and they got right back into it. That’s a really good team. They’re going to win a lot of games this year.”

Kennedy, which fell to 1-1, used a 16-4 run to begin the third period to pull within 34-33 with 4:29 left. The Eagles got 3-pointers from Hayden Wait, Cam Hollobaugh and Gabe Green, and Saba Svani scored all of his six points in the quarter.

“(Kennedy coach Mark Komlanc) made some great halftime adjustments,” Wernicki said. “They were switching zones on us in the third quarter and it bothered my guys a little bit. We were a little timid, but we played through it.”

Komlanc was pleased with the Eagles’ resiliency.

“We struggled early with foul trouble with Gabe and some others, plus we couldn’t make our shots,” Komlanc said of the early struggles. “We got back into the game a couple different times. We came out in the second half with a goal of attacking the glass and moving the ball and we did that.”

The Wildcats reasserted themselves, as a two-handed dunk by Trey Metzka energized them and the home faithful.

“Trey’s dunk got us going and the crowd going and we fed off that,” said Carson Ryan, who scored eight of his 15 points in the fourth quarter. “We’re from Struthers, so we’ve got grit.”

Struthers closed the quarter on a 17-2 blitz, scoring on several breakaways.

“(JFK’s rebounding) was the absolute factor in the third quarter when they made that large run,” Wernicki said. “It’s what got them back in it, the offensive rebounds especially. Giving up offensive rebounding was very deflating for our guys.

“When that happens, we can’t get out and run. We’ve defended and forced a miss, but we weren’t finishing the job with a rebound. Then we have to work hard on defense again.”

But as quickly as the Wildcats’ lead shrunk, they were back in control with a 51-35 lead entering the fourth quarter.

“Good teams remember what got them back in the game and they continue to do it,” Komlanc said. “We’re not quite there yet. We forgot that playing good defense, communicating, moving the basketball unselfishly and rebounding is what got us back into it.

“I don’t know if it was mental fatigue or a maturity thing, but for whatever reason, we got away from those things.”

Ryan helped Struthers pull away in the fourth quarter.

“We lost a lot of experience, two starters to graduation and three lettermen who didn’t return,” Ryan said. “Coach has been preaching that we’re going to face adversity, so it was good to face that in the opener and respond. We were up big and our emotions were riding high and we battled back after we fell apart a bit in the third period.”

“Gabe is still learning,” Komlanc said. “He’s got a high ceiling. We need to keep him mentally engaged and locked in, so that he can bounce back from a mistake rather than compounding a mistake.

“I want Cam to shoot the ball more. He passed up some shots and tried to drive and dish to get others involved. I like that, but we need him to take and make big shots for us.”