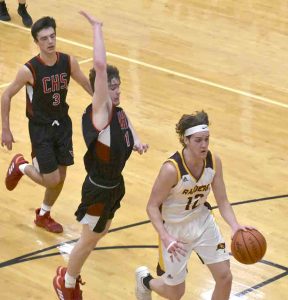 BEAVER TOWNSHIP — Eli Taylor stole the ball in the waning seconds of the first half, raced to the top of the key and connected on a 3-pointer just before the halftime horn to double South Range’s lead over visiting Canfield.

While they were his only points of the game, the three points gave the Raiders a 34-28 lead and provided momentum in the second half when South Range pulled away to a 65-47 win in its season opener.

“Those are the types of plays and effort we’ll need all season. We’ll need contributions from everyone on this team,” said 6-foot-4 senior Chris Brooks, who scored a game-high 26 points and grabbed 11 rebounds. “Justin Marrie and Kris Scandy did a great job defensively and Jake Gehring stepped up.”

The Raiders return two starters in Brooks, who was special mention all-state last season, and Dante Digaetano, who added 14 points.

“We only have three lettermen, so we’ve got to get those young guys acclimated in a hurry and tonight was a great start toward that,” Brooks said. “We came out with more defensive intensity in the second half. We took away some of the inside stuff and then we were covering the 3-point line like crazy and (Canfield) started rushing their shots and I think we just took them out of their rhythm.”

The first half was back and forth, but the Raiders upped their margin in the third quarter with a 16-8 surge that built a 50-36 lead and the Cardinals didn’t get their deficit below nine points the rest of the way.

“Give coach (John) Cullen and his team a lot of credit,” said Canfield coach Todd Muckleroy, whose team fell to 2-1. “They play basketball the right way and a lot of teams should emulate them. They play tough, make contested layups, rebound the ball, make free throws and play hard-nosed defense.

“They outrebounded us by at least 10. We gave them second opportunities and they took advantage of those quite a few times. They’re physical.”

“South Range took some charges and we maybe became a little hesitant to drive in the paint,” Muckleroy said. “They did a great job of taking away the driving lanes, especially against Brayden. They also did a great job of closeouts on our perimeter shooters. We weren’t getting great looks.”

“Midway through the second quarter, we started keeping Beck out of the lane,” Cullen said. “That was the key. We wanted to take away the driving lanes and stick with Bruno on the outside. We weren’t going to offer help defense off Bruno because he’s too good of a shooter.”

It helped South Range to have some bulky, physical players on the boards.

“It was definitely a physical game on the boards tonight,” Cullen said. “We’re going to have to develop some of the younger guys inside now, too. We lost our second-best rebounder for the year (Michael Patrone) to an injury in a scrimmage when he had a bad torn meniscus. We also lost our backup point guard (Isaac Allegretto) for the year due to injury.

“We’re going to have to be a tough, physical and scrappy team as the young guys work their way through some things. We’ll toughen them up in a hurry because we play a demanding schedule. We play three of the top Division III teams in the area and we play 19 Division II teams. That should help prepare us for battle in the postseason.”

Cross country a contact sport? The misnomer is over. The Ohio Department of Health no longer considers cross ...