Plenty of firsts for Tigers in final 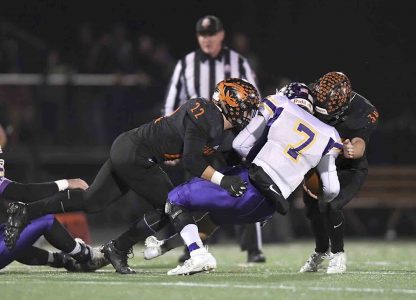 The first Friday of December will bring with it a series of “firsts” for the Springfield High School football program.

The Tigers on Friday will play Anna in the Division VI state title game at Tom Benson Hall of Fame Stadium in Canton.

Springfield (14-0) will be making its first-ever appearance in the state championship. The Tigers are also playing their first-ever game in December and playing at the famed Canton venue for the first time.

The 10 a.m. kickoff time and a 15th game in one season are also firsts.

Mahoning County will be represented in the state finals for a 24th time. County schools own a record of 14-9 in the finals.

Springfield advanced to week 15 thanks to a dominant 42-14 state semifinal win over East Knox on Friday. The Tigers led East Knox 14-7 at halftime, but outscored the Bulldogs 28-0 in the second half to earn the trip to Canton. Springfield amassed 450 total yards, including 389 rushing yards. Sophomore quarterback Beau Brungard led the way, rushing for 237 yards and three touchdowns. He also threw a 25-yard touchdown strike to Garrett Walker.

Springfield will face another high-powered offense in the state final. Anna (13-1) is averaging 45.1 points per game against some of the stiffest competition in Division VI. Anna is a member of the Midwest Athletic Conference, whose members have combined to win 33 state football titles since 1989.

This year the MAC sent five of its schools to the playoffs.

Anna, which owns a 6-11 post-season record, is looking to become the eighth MAC school to win a state title.

Anna’s offense is led by the one-two punch of running back Riley Huelskamp (1,516 rushing yards in the regular season) and quarterback Bart Bixler (1,008 rushing yards, 1,080 passing yards regular season). As a team, the Rockets churned out 3,017 yards on the ground through the first 10 weeks.

In four playoff games, Anna has outscored opponents 179-54. Its defense is giving up just 12.7 points per game.

Anna’s lone loss of the season occurred on Sept. 27 in a 17-14 setback to fellow MVC member Marion Local. The Rockets have since won nine straight games.