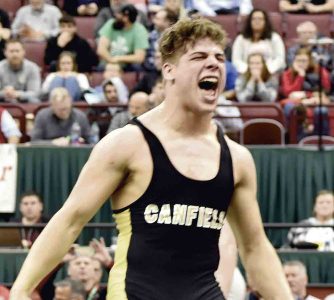 Staff file photo Anthony D’Alesio, one of three state champion wrestlers a season ago for Canfield, returns as one of the top wrestlers in the state regardless of weight class.

CANFIELD — Over the past five years, the Canfield High School wrestling program has grown into a state powerhouse.

The Cardinals crowned at least one state champion in each of the past four seasons. As a team, they finished as state runner-up at the individual state tournament three straight years (2016-2018). The pinnacle moment may have been last season, when Canfield set a school record with three state champions.

During their reign, they’ve sent wrestlers to Ohio State, Pitt, Cleveland State and they’ll soon add Kent State — and probably a few others — to the list.

They’ve done something else as well: They’ve created a monster.

A cycle of wrestling dominance never seen before in this part of northeastern Ohio has led to expectations that are sky high. While Canfield brings back two state champions and three other wrestlers ranked in the top 20 in the state, the Cardinals are fielding a younger team than in years past, and third-year coach Steve Pitts is trying to help a youthful group grow up fast.

“We’ve got a real mix of experience and lot of new faces,” said Pitts, who will lean on state champions Anthony D’Alesio and Nick Crawford along with state qualifiers Nick Barber and Ethan Fletcher to guide several newcomers. “They’re competitive, young kids, but they need to learn how to wrestle in high school. We’re relying on the leadership of Fletcher, Barber and D’Alesio to try and get these younger guys to realize the expectations.”

The senior suffered an arm injury during football season, and Pitts isn’t sure when the returning Division II 195-pound state champion will be back — or if he’ll be back at all.

Crawford went on an unprecedented run at last year’s state tournament and ended up dominating in the state final. Furthermore, he provides daily competition for D’Alesio and other upper-weights along with leadership and knowledge to the rest of the team. It will be a devastating loss if his injury lingers.

“It’s huge,” Pitts said. “A kid like that, who’s been wrestling his whole life, you miss a leader in the practice room, you miss an anchor at the end where you know you’re going to pick up a win in a dual meet. It hurts right now, and we’re doing our best to overcome it, but we’re still trying to figure things out.”

The rest of the lineup is still rather imposing.

D’Alesio is Division II’s No. 1-ranked 182-pound wrestler, he’s sixth nationally and is regarded as one of the state’s best overall wrestlers — regardless of division. He’s a three-time state placer and a two-time placer at the Ironman Tournament — arguably the nation’s toughest regular-season tournament.

Barber and Fletcher have been overshadowed the last two years because of the likes of Crawford, D’Alesio and the recently graduated Tyler Stein (a two-time state champion now at Ohio State). Barber, a junior, is ranked as high as second in the state at 106 pounds, and Fletcher, a junior, and is ranked in the state’s top 10 at 120 pounds.

Then there are seniors Richie Hofus (ranked 15th at 285), Peyton Kostelic (15th at 220) and McCoy Watkins (20th at 145) to add more depth. However, there are 14 weight classes in wrestling, and while the Cardinals sprinkle in a few more veterans, a large portion of the team is made up of freshmen and other underclassmen who are still learning the grueling nature of high school wrestling.

“Coming from middle school and jumping into our program, you still don’t quite get what it’s about — how hard practices can be and the toughness it takes,” said Pitts of a talented freshmen class. “We’ve really been harping on that the last couple of weeks. It’s a process, and we’re going to keep working on it. Hopefully these guys here, their leadership will rub off on the rest of the guys, and their competitiveness will rub off. That’s what we need.”

While there are challenges, don’t think for a second Canfield is backing down or expecting an off year.

They may be young, but the Cardinals have a roster size near 50, creating a wildly competitive practice room. Pitts hopes the daily competition, along with a coaching staff littered with former head coaches, can help the Cardinals remain the alpha dog in the Mahoning Valley.

“You have these expectations,” Pitts said, “but I told the kids the other day, ‘Just because you put on a Canfield singlet doesn’t mean you’re going be a state champ.’ The seven state championships we’ve won in the past five years, every one of those kids worked their tails off. They did all the extra stuff — they traveled in the spring and in the summer — and that’s what you have to do.

“So, we’ve been teaching that to these kids. Our group previously was so self motivated, so that’s been the difficult part. But our expectations are always going to be that way. Wherever we go, we’re going to show up to compete.”