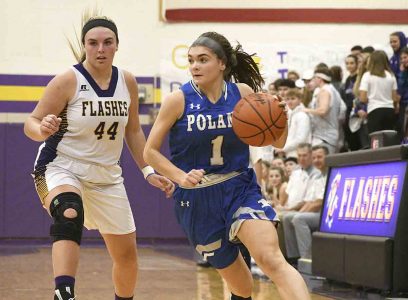 CHAMPION — When two district winners collide, it’s bound to be an exciting game.

“It’s great to get out of here with a win,” Bulldogs coach Nick Blanch said. “We knew that they’re a very good basketball team. (Champion coach) Mike (Cole) does a great job up here. We’re very fortunate though, there’s a lot to learn from it.”

Most lessons come in the form of losses, but even though his team left with a win, Blanch saw plenty of things to work on in the coming weeks from his team and himself.

“You learn from losses but can also learn from a win,” Blanch said. “I think we have a lot of people that learned a lot of lessons tonight, including me. There’s some things we need to adjust and tinker and practice a little bit.”

One of those things to tinker involves Jackie Grisdale.

Certainly not because of her play. Grisdale put up an excellent performance with 26 points, including four 3-pointers. The tinkering comes from wanting to spread the offense more so the team doesn’t have to rely on Grisdale as much.

“Jackie’s an all-around player,” he said. “We need to do a better job taking the heat off of Jackie. I wasn’t real pleased about that. She gave us everything she had and we’re successful because of her.”

On the other side of the court was Champion’s Emma Gumont who also put up a strong performance. Gumont finished the game with 21 points.

“She’s fantastic,” Cole said. “Sometimes she makes some plays that we just kind of laugh because we don’t know how she does it. I don’t think she shot that well outside, but she attacked the basket hard. She got to the free throw line quite a bit.”

Another name that caught the eye of Cole was Savannah Dodrill. Despite only scoring two points, Dodrill was all over the court on defense.

While “moral victories” isn’t a phrase used in Champion, Cole says he couldn’t have asked for more from his team.

“We don’t accept losses here, but when you play like that, I’m not going to be upset at the girls,” he said. “They gave me everything I wanted. Somebody’s got to lose.”

Blanch had nothing but high praises for the Golden Flashes, saying that Champion is a team people are going to hear a lot about during the year.

“They’re bigger than us and they’re stronger than us, but our kids battled and that’s the only reason we were able to walk out of here tonight with a win,” Blanch said. “That’s a good basketball team.”

Even though the season just started, Cole is already preparing for March, and the schedule shows it. Up next for the Golden Flashes is another powerhouse team in McDonald.

“They’re a tough team, that’s why we put them on the schedule,” Cole said. “We’ve got Struthers, McDonald, Poland, Howland, Harding. These are the teams that you want to put on your schedule. We might get beat, we might get pushed around, we might get a win, but at the end of the day, during tournament time, you’ll be ready for anything you’ll see in Division III.”

Poland moves on to open up the league schedule against Struthers. Blanch is expecting another hard-fought battle.

“It’s going to be another battle, just like this,” he said.