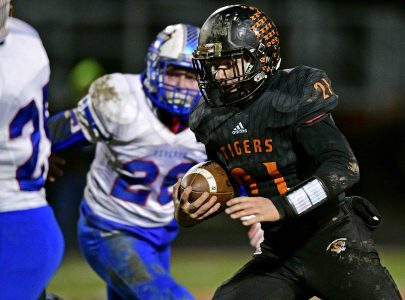 Living in the shadows of a big brother can be a daunting task.

Trying to follow in the footsteps of an older sibling who established himself as one of the top quarterbacks in school history can be overwhelming.

However, that’s just the situation Beau Brungard found himself facing this fall. One year after older brother Brannon Brungard graduated from Springfield with All-Ohio honors and numerous school passing records, Beau — just a sophomore — was asked to fill the void.

Beau and his teammates are 11-0 and will face Trimble tonight in a Division VI, Region 21 semifinal.

So, how does Beau stack up in the eyes of big brother?

“Honestly, I’m jealous, I just wish I could have been this good during my sophomore year” Brannon admits. “He is so good. I’m just blown away. I just like to think that my picking on him all of those years made him tough and made him the quarterback that he is today.”

Brannon is now a freshman on the Grove City College football team. He said he has been able to attend roughly half of Springfield’s games this year.

“This team lost so much to graduation, so to see them playing lights out is pretty special,” Brannon said. “It’s cool, I used to look at some of these players like, ‘those are just my little brother and his friends.’ Now they are really making a name for themselves. They have put together an historic season.”

Through 11 games, Beau has completed 88 of 129 passes for 1,551 yards. He has thrown 20 touchdown passes while giving up just three interceptions.

Beau has also rushed for 623 yards and 13 touchdowns, averaging 9.4 yards per carry.

Springfield reached the playoffs during Brannon’s sophomore season. The Tigers logged an opening-round victory over Columbia then fell to Kirtland in a second-round game.

Springfield finished ninth in its region in Brannon’s junior and senior seasons.

“Just missing out for the playoffs the last two years was pretty gut-wrenching,” Brannon said. “A small part of me is envious of what this team is accomplishing but a huge part of me is beyond excited and happy for my former teammates.

“They have just played lights out from the very start of the season. Everything has gone their way. It’s been so much fun watching this group form their own identity and make history.”

As for the inevitable comparisons between big and little brother?

“I don’t know that there are drastic differences,” Brannon said. “One noticeable difference is Beau’s ability to physically get things done. In high school I used to have to think my way out of tough situations. Maybe dump off a pass to a receiver or just get rid of the ball and live to see another down.

“Beau can physically make plays happen. He has that strength to make things happen with his arms and his legs even when it appears as though the play is breaking down.”

And, Beau has the added advantage of having a brother who has already been through the experience.

“I think there was a short period of time where Beau didn’t want to listen, he wanted to do things on his own which is typical of any younger brother,” Brannon said. “But now that he’s in my shoes he sees things differently and he knows that my experiences can help him learn the position.

“The thing is, now he is so talented and he understands the game so well, my best advice is for him to just go out and be himself and play his game.”

A third brother — Brady — is a junior on the team and in fact centers the ball to to Beau. Their father, Mark Brungard, is the Tigers’ offensive coordinator.