Struthers looks forward to another chance at Bulldogs 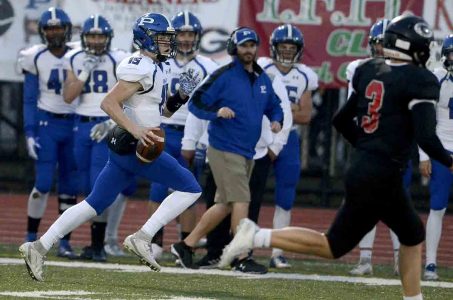 The Wildcats knew their opportunities in Week 10 at Dave Pavlansky Stadium in Poland and were very salty at the outcome — a two-point defeat to nearby rival Poland.

Seventh-seeded Struthers (6-4) is at second-seeded Poland (8-2) in a Division IV, Region 13 first-round game as the two Northeast-8 Conference schools resume their rivalry tonight, starting at 7 p.m.

“Our kids would’ve stayed in the locker room eight days to have a chance to go back on the field and continue fighting and continue the season,” Kuntz said.

Lost opportunities, these Wildcats had them as they fumbled the ball twice around the Poland 30. Drives stalled, so did the chance to win and get a higher seed in the Region 13 postseason.

“That’s something you can’t do,” Kuntz said. “We’ve got to cause a couple, hold on to the ball, match them physically and I think our kids will do that.”

Poland’s defense has bullied its foes heading into this Week 11 matchup, giving up no more than eight points in each of the five games from Week 4 through 9.

Poland coach Ryan Williams gives the credit to defensive coordinator Rick DiNunzio for that preparation, but it’s nothing without the talent.

The Bulldogs have plenty, led by senior captain Mike Voitus, a 6-foot-2, 255-pound tight end and defensive end, who has garnered some FCS and Division II interest.

“We have a hard time finding scout guys who want to line up and go against him,” Williams said.

Senior linebacker Zach Ellis (5-11, 210) is a fullback and linebacker for the Bulldogs.

Defensively, these two were instrumental, but on offense they powered the team’s 2,400 yards rushing and 35 touchdowns in the past 10 games.

“It’s always been a big part of what we try to do,” Williams said of the run game. “The best defense is always our offensive line and our running game. If we can finish with the ball in our hands, that’s something we’re real proud of.

“His ability to carry the ball and gain positive yards has helped us tremendously, that’s for sure.”

Struthers is led by senior running back and safety Adrian Brown (6-0, 175), who had an interception and fumble recovery last week. He has close to 1,000 yards rushing as the team’s feature running back.

“He’s a kid that gets better with the more carries he has,” Kuntz said. “Now that’s it’s Week 11, there’s no need to save anything.”

“He made a couple of throws last week and it’s like, ‘Wow,'” Kuntz said. “It’s still evolving with him. We have to do a better job of getting him in space at times. Let him be him.”

Struthers has a couple of good returners in Hall and sophomore Josh Marshall (5-9, 168).

Poland has its share of mistakes in Week 10, something Williams hopes his teams clean up tonight.

“We watched our film and tried to anticipate some counter moves,” he said. “What are they seeing that we need to adjust to? Conversely, we’re looking for the same thing on the other side of the ball. What is it they’re looking at that we can take advantage of and change a little bit of the game plan?

“It’s a unique situation, but the preparation is the same. We put just as much time in, if not more this week as we have any week, just because it’s the next opponent. We have to be prepared.”

Coach Ben Howlett was wrapping up his recruiting class for this current season. He and the rest of the West Liberty ...