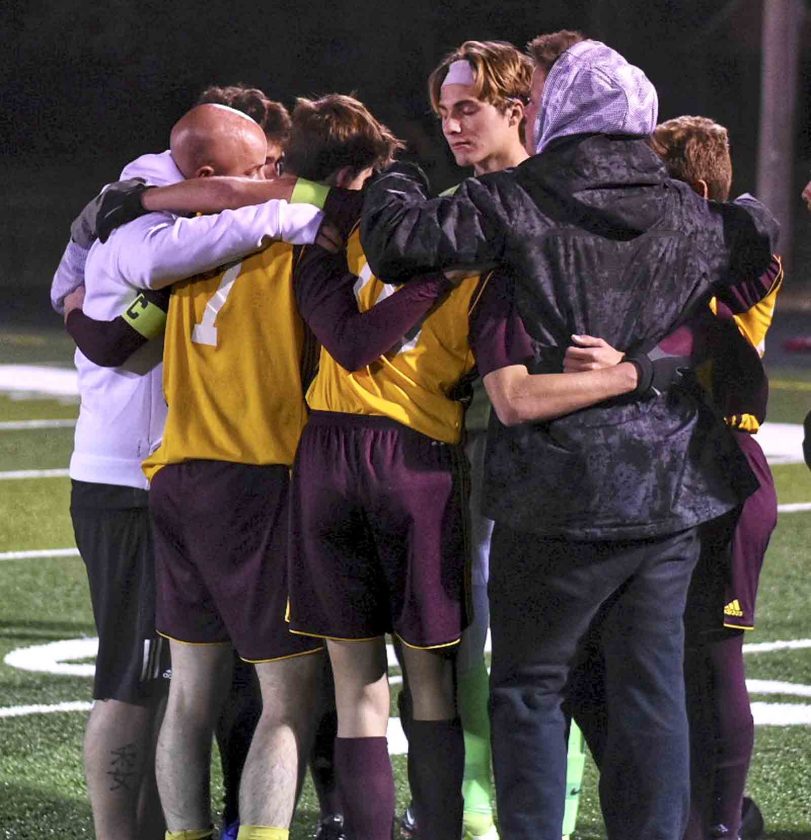 DOYLESTOWN — Mike Bailey gathered his eight seniors in a tight-knit circle. He addressed them as visible tears flowed following a 2-1 double-overtime loss to Bluffton on a new field turf field in the midst of a neighborhood in the Chippewa school district.

“I couldn’t be more proud of them,” said Bailey after his team ended its season in this Division III state semifinal with a 19-3 record.

Bluffton’s Jonathon Schriner found the back of the net, just out of the long, outstretched arms of South Range’s Matt Lucas, who had eight hard-fought saves, with 2:32 left in double overtime.

Bluffton (18-2-2), which knocked of top-ranked Toledo Ottawa Hills in a regional championship, advances to play Columbus Wellington Sunday at Mapfre Stadium in Columbus in the Division III state title game. 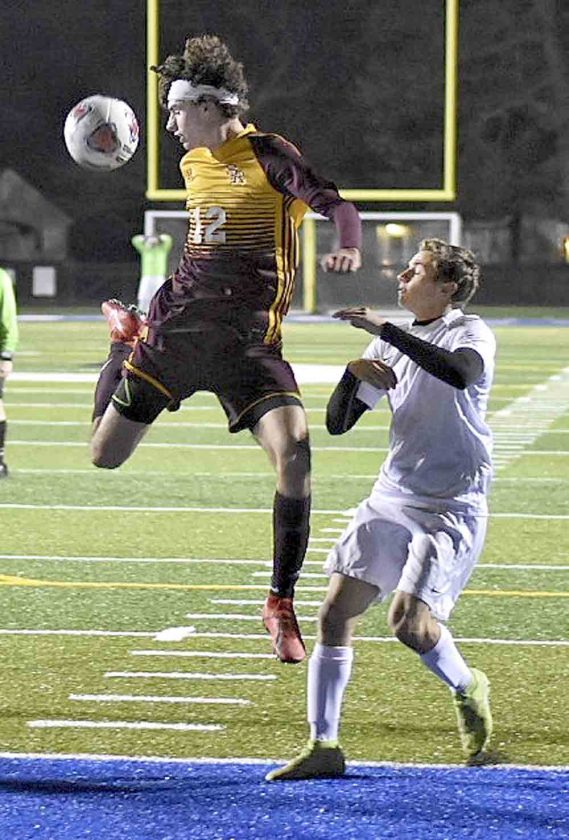 Staff photo / John Vargo Luke McConnell (12) of the Raiders tries to control the ball and get off a shot.

“I can remember those guys when they came out on that field for the first time as freshmen,” Bailey said. “The relationships are what I’m going to miss the most. This is obviously why we play. I love those guys to death, just seeing them every day.

“Not having those eight guys around is going to be very tough.”

The defensive battle with both team’s back lines was very stout on a cold, November night. Not much was getting near each keeper. Bluffton’s Nic Essinger, who had six saves, was tested at times.

Bluffton had a couple of yellow school buses bring students and fans to the game near the 7 p.m. start, filling a good portion of the Chippewa stand, with the other part being the vocal South Range bunch.

“We knew it was going to be like this,” Bailey said. “What an atmosphere with both crowds showing up big.”

Lucas dove for a shot and saved it early in the second overtime. He hit a post, re-injuring a shoulder he had hurt in the district title game against Crestview. South Range’s defense held off the Pirates’ push in the next couple of minutes as Lucas was on the sidelines. He returned to a hero’s welcome from the Raiders faithful, tipping a shot over the crossbar almost as soon as he re-entered the game a couple of minutes later.

“Matt Lucas is as tough as nails,” Bailey said. “To get hurt like that and go back out there for his teammates, I can’t say enough about him.”

Bluffton’s Jude Spallinger booted a free kick from about 25 yards out and Kaden Basil headed it past Lucas for the game-tying goal with 8:57 remaining in regulation, tying the game at 1.

Johnson, the Youngstown Division III Player of the Year, had free kick after free kick — setting up his teammates in the first half. Johnson nailed one from 30 yards out with 2:52 left before halftime. Pierson was there for the header, getting it to the right corner past Essinger for a 1-0 lead.

South Range had a rush toward the goal in the first minute-and-a-half as a Raiders player got past Essinger and had a wide-open shot at goal. The ball hit the right post and Bluffton cleared. 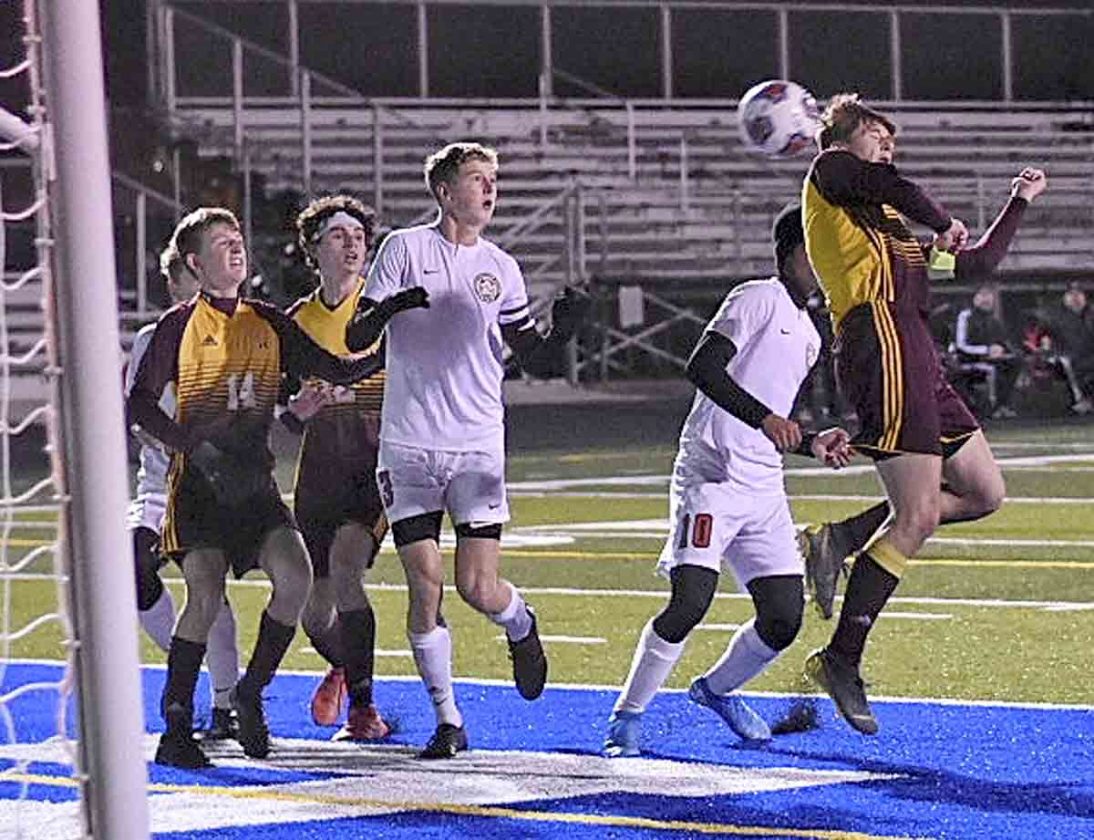 Staff photo / John Vargo Quinn Pierson, far right, of South Range tries to get a header on goal Wednesday against Bluffton in a Division III state semifinal at Doylestown Chippewa.

Bluffton played much more aggressive in the second half and in the first overtime — including a flurry in the last minute of the first 15-minute OT session — almost resulting in the game-winner.

“We got away a little bit of what made us successful,” Bailey said. “That’s tough to swallow. We regrouped. We came back strong. Credit to Bluffton. That’s a very good team. I wish them luck on Sunday.”

This is a South Range program that has been to three state semifinals since 2014 and lost in the 2015 state final in Columbus.

“We turn out good athletes because we have great families and a great community that really supports us, allows us to be a step above and do things correct,” Bailey said.

Even so, things don’t always go your way — just like the Raiders experienced Wednesday night.

“It can be a really cruel game sometimes,” Bailey said. “That’s why it’s the beautiful game.”