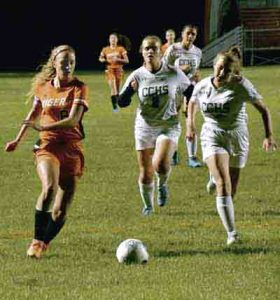 Would it disrupt Monday’s game?

No, it was fixed well ahead of the 7 p.m., start time against fifth-seeded Canton Central Catholic.

The top-seeded Tigers girls soccer team had enough power to illuminate a couple of stadiums in a Division III Canton District semifinal, winning 7-0.

Springfield coach Justin Kosek looked at his team during the running clock, as much as it can during a soccer game, went down around 3 minutes. Mostly reserves were on the field. He approached his starters on the bench.

“You made a statement tonight. Good job,” said Kosek, whose team improved to 17-1.

It was his daughter, Kylee, a junior, who started off the offensive explosion — booting one in off a rebound with 30:38 left in the first half for a 1-0 lead.

“Definitely set the tone of the game that we were there to play and take care of business,” Kylee Kosek said. “I think it was really, really good for us to get that early in the game.”

That goal kept the pressure in the first half against a Canton Central Catholic team that ended the season 7-10-1.

Sophomore Gracie Venturella had one goal at the top of the goalkeeper box with 8:48 left in the half, and Springfield pressed in the final 30 seconds before intermission — making a last-ditch effort to put one more up on the Crusaders.

Sophomore Brianna Holt followed the orange-clad pack of Springfield players and banged a goal home with 3 seconds before intermission.

As good as the offense was against CCC, the defense was even better as sophomores Kaila LaMorticella, Kylie Medvec and junior Gianna Latronica jammed the middle of the field — not allowing the Crusaders to have much momentum.

“They touched every ball that they could,” Justin Kosek said. “They were a nuisance in the middle wherever CCC got the ball. They shut them down before they got to our defense.

“Played very strong and very good, but mids made it so much easier on them then it could have been.”

Springfield, which plays third-seeded Akron Manchester in Thursday’s district final at 7 p.m., at site to be determined, was kind of stunned at the success it had Monday. The Tigers have outscored their opponents 142 to 34 overall this season and 18 to 2 in two playoff contests.

“We strive to pound it in as much as we can, not to run up the score, but work hard at what we can do,” Kylee Kosek said.

Being this good definitely takes practice.

Kylee Kosek was marked all night by CCC’s Isis Pittman. The Crusaders gave the Tigers a different look than they’ve seen all season with a sweeper and three players back on the defensive end.

It was all to slow down a Springfield offense that seemingly cannot be stopped.

“This is the strongest team I had in the middle, front to back,” Justin Kosek said. “The connection they can make up and down the field, defense to mids to Kylee playing forward, is impressive.”