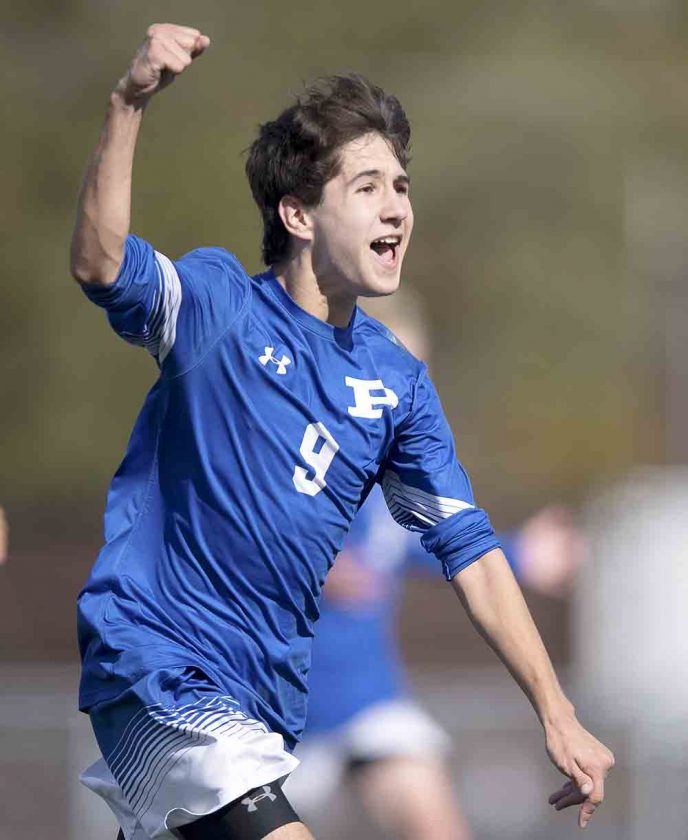 Correspondent photo / Robert Hayes Noah Huda of Poland celebrates after scoring the game-winning goal with 1:32 left in the second half in his team’s 2-1 tournament win Saturday over the Canfield Cardinals.

POLAND — Regardless what sport it is, what the teams records are, or where the game is at, when Canfield and Poland play each other, you know it’s going to be a hard-fought battle.

Saturday afternoon’s boys soccer Division II sectional bracket final between the Cardinals and Bulldogs was the quintessential example of that, as a freshman stepped up in the biggest moment of a tie game with the clock winding down in the second half.

With 1:32 left in the match, Noah Huda knocked in a goal following a Poland corner kick to give the Bulldogs the 2-1 victory over their rival at Dave Pavlansky Field in Poland.

After the match, Huda was excited that he helped his team win.

“I just wanted to win the game, and everyone just got around me and I got excited and overjoyed,” he said. 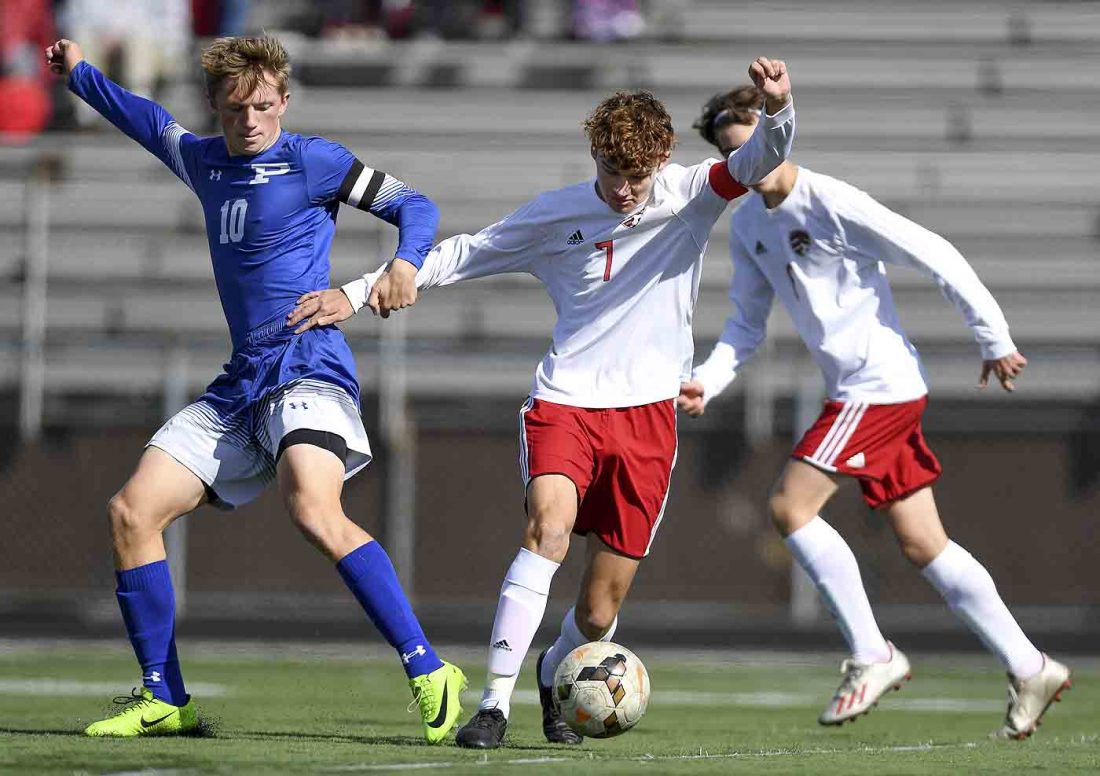 Correspondent photo / Robert Hayes Adam Rumble, left, of Poland battles Aren Villano of Canfield for the ball Saturday at Dave Pavlansky Field in Poland where the Bulldogs beat the Cardinals, 2-1.

“We played great as a team, and I was just excited to get the job done for us.”

“I think it’s special for him,” Huda said “We knew he could do that all year long, he’s done things like that for us all year long.

“He’s not your typical freshman, he’s a name that you’re going to hear a lot more over the next couple years, but he has the support of all of our guys. Our seniors have really accepted him right from the beginning. He’s such a talented kid, and I’m glad to see him have that opportunity and be able to finish at the very end.”

Poland took an early lead with a goal by junior Mason Planey, but failed to find the back of the again net until Huda’s late goal. Seventh-seeded Canfield wouldn’t back down, and the Cardinals knoted the game late in the first half with a goal by sophomore Zack Ahmed off a corner kick.

Although the game didn’t end the way they wanted it to, Canfield (4-10-3) coach Christian Silvestri felt his team left it all on the field.

“It was a great game on both ends, it was enjoyable for both sides I’m sure,” he said. “It was a late goal, we held them 1-1 most of the game, so obviously it didn’t go our way, but we fought hard.”

Garcar didn’t feel like the tie going into halftime got to the Bulldogs.

“We said it’s 1-1, so it’s not like we’re losing the game, we have 40 minutes to figure a way to get a ball in the back of the net, so we still felt confident,” he said. Obviously we would have rather had the lead going into halftime, but we felt like we were doing some good things.

“It was just about cleaning up some other areas and focusing on some of the details that we talked about before the game. I think our guys did enough to get through the game.”

Huda enjoys the experience he’s gained in his freshman season.

“It’s amazing, I enjoy my teammates, they push me to get better and better, and I’m just glad to be around them.”

On the flip side of the coin, Silvestri was disappointed that Canfield’s season ended, but sees positives to build off of going into next year.

“Like we’ve said 100 times in interviews, we have a young team, and we had some momentum, things were starting to click. So, if anything, we’re optimistic about next season, and ready to get started, we can’t wait. It was just sad for the seniors the way it ended, but I think it was a good season for us.”

Poland (11-3-3) advances to host the third-seeded Lakeview Bulldogs (10-6) on Tuesday. They’ve beaten Lakeview twice this season by a score of 2-0 in both contests.

Garcar felt like Saturday afternoon’s match is going to help prepare the Bulldogs going deeper into the tournament.

“We just talked about it, it’s adversity,” he said. “Canfield is not a typical seven seed, they’re very, very good this year, and they’re going to be really good for the next couple years. So it was an early test for us, we haven’t played in almost two weeks, so we weren’t real sure how we were going to come out initially.

“I think our guys handled it and I think they’re going to ride this going into Tuesday.”