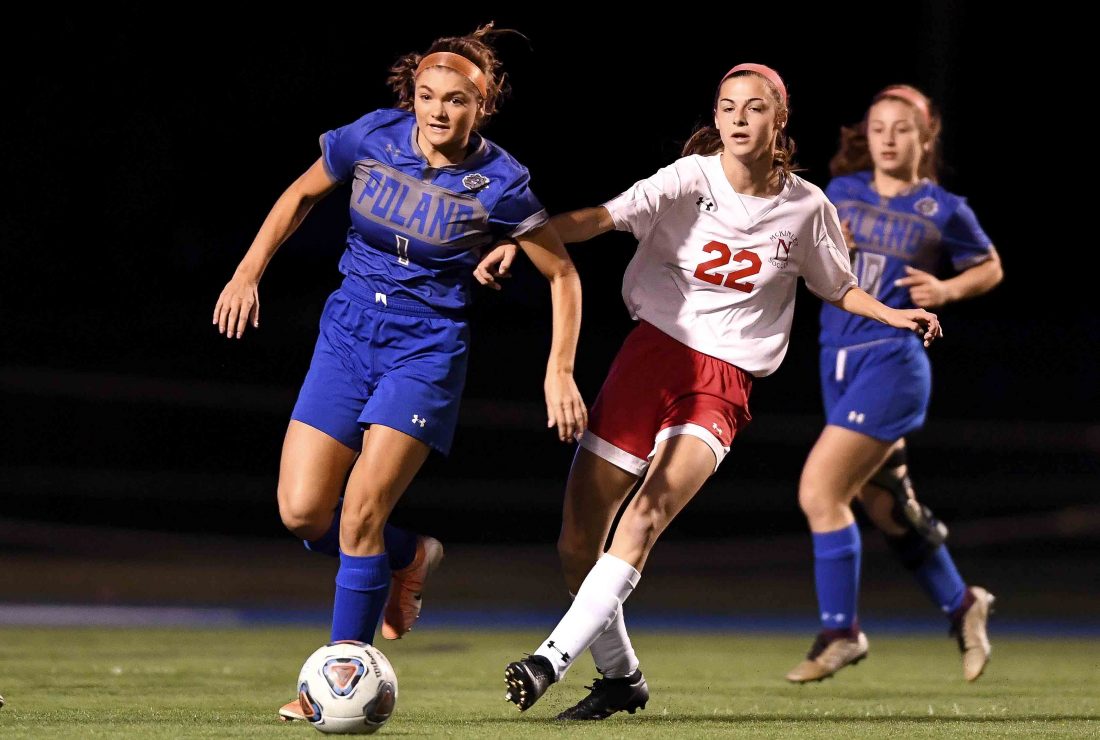 Correspondent photo / Robert Hayes Brooke Bobbey, left, of Poland battles with Emily Burnham, center, of Niles for the ball in the first half at Poland High School.

POLAND — Defense has been the bread and butter for the Poland Bulldogs girls soccer team so far this fall.

It came up big again Wednesday.

The Bulldogs’ stellar defense guided them to a 1-0 victory over the Niles Red Dragons in the regular-season finale at Poland High School on a second half goal by Avery Grischow.

Poland (11-0-5) recorded its 14th clean sheet of the season in the win against the Red Dragons, and the Bulldogs only allowed two goals during the entire regular season. 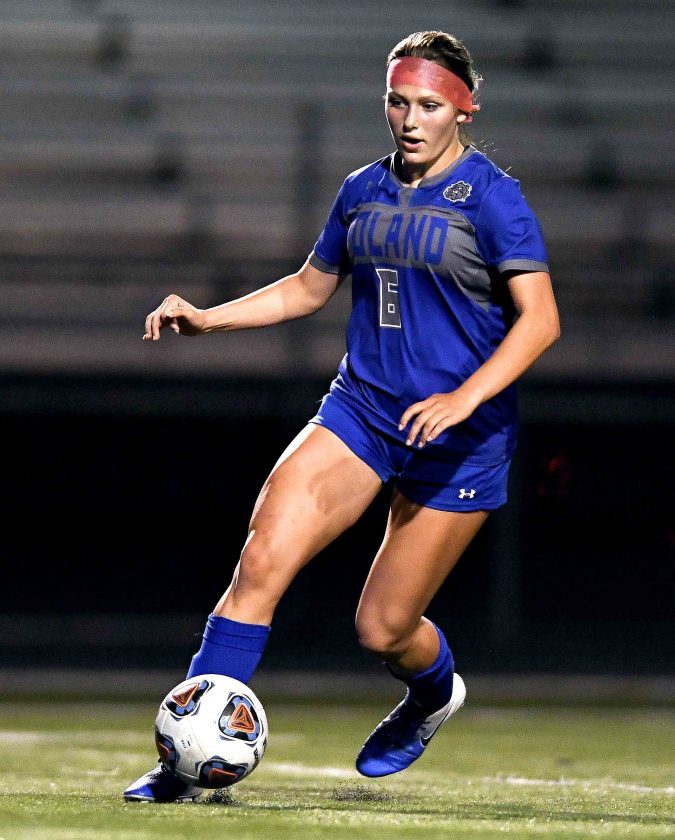 Correspondent photo / Robert Hayes Avrey Grischow of Poland prepares to pass the ball to one of her teammates during the Bulldogs’ 1-0 victory over the Red Dragons. She recorded Poland’s lone goal during the second half.

“They’re just a special team, they really are,” he said. “Fourteen clean sheets, it’s just an amazing feat to have. They really did a great job this season keeping Gabby (Romano) clean. She did a great job in goal — she’s got strong hands, good vision, she’s a good goalkeeper.”

Romano felt that second-half adjustments made the difference.

“The first half, they (Niles) had a lot of shots on me,” Romano said. “I think we were letting them by, but at halftime we had a talk and we needed to D up and really give intensity, and I really didn’t have any shots to save in the second half.

“We definitely picked up the intensity and we played more aggressive.”

Grischow’s goal came with 27:45 left in the second half. 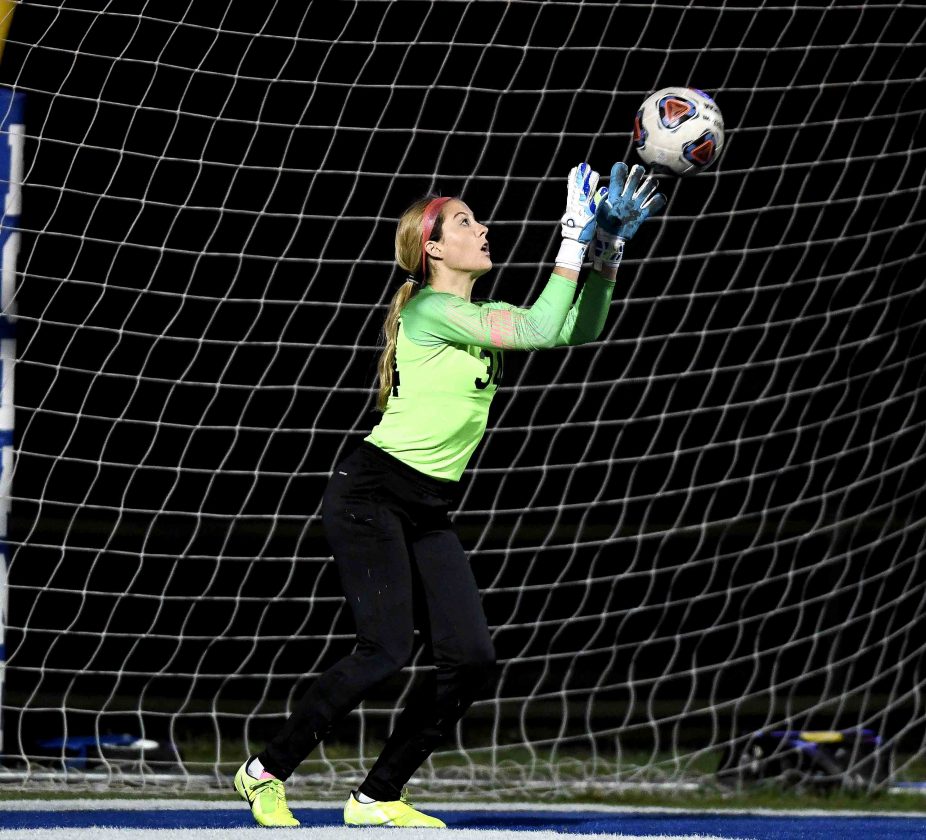 Correspondent photo / Robert Hayes Gabby Romano of Poland catches the ball during a long shot on goal by the Niles Red Dragons. Romano recorded a clean sheet on Wednesday night.

“I know Teegan (Graff) has a really good shot, so I was just working, trying to get there to be able to finish,” Grischow said. “I think I heard (Monaco) say ‘Get it to Avery,’ so I was making sure I was there.

“Sometimes we do give up after a goal, but I think this time, we really tried to push through and get another one.”

Monaco knows his team is a defensive-minded squad, and he doesn’t shy away from that.

“I think that we pride ourselves in our defense,” Monaco said. “That’s something that we’ve always done, and we’d like to improve our offense, but we do love playing a defensive game, and that’s kind of our staple. That’s who we are.

“We’re not going to fight who we are, but to do what they did this year truly is special. I cannot reiterate it enough. I mean there’s not many teams that do that in any division, having 14 clean sheets. That’s quite an accomplishment.”

Meanwhile, Niles (11-5) coach Scott MacMillan knows that playing on the road against a conference opponent is difficult.

“We played hard in the first half,” he said. “We had a tremendous amount of opportunities, didn’t capitalize and lost.

“We know what we’re coming into, and you know, you’re always down 1-0 when you’re playing on the road, so you got to win every game 2-0, so bottom line, we didn’t do it, didn’t get it done. They’re (Poland) a good team, we play them again next Wednesday, first round of the playoffs.”

MacMillian is excited to see Poland a third time around.

“I’m always looking forward to it,” he said. “We have a lot of film. We’ll be watching a ton of film, and analyze it, and get to that point, when it’s all the marbles. That’s the way it is.”

Poland defeated the Red Dragons by a score of 4-0 earlier in the season, but Monaco wants his team to be on their toes.

“To see them a third time, we’re excited to play of course, but we are very cautious because we know how easy it is to let your guard down against a team a third time, so I think we’re just being very humble, and we just want to approach it like it’s the first time we’ve seen them.”