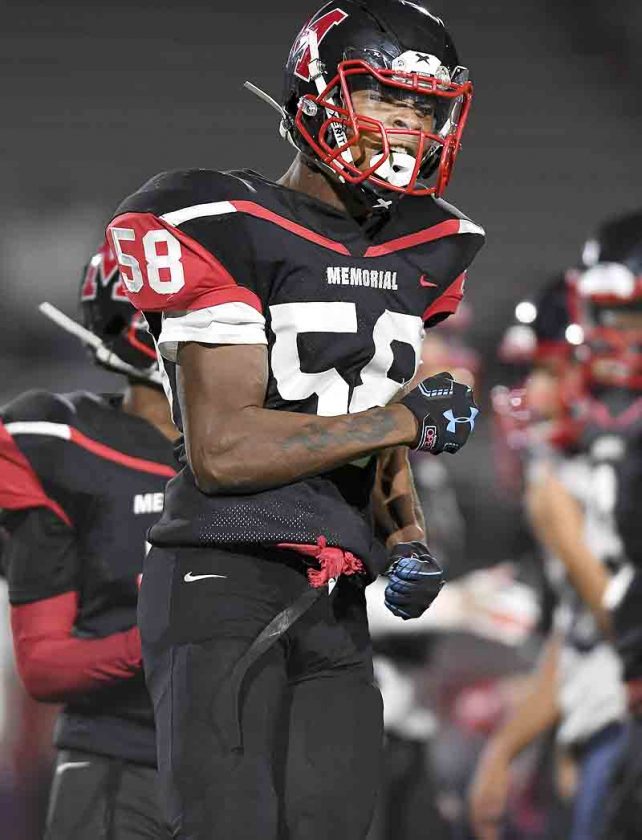 Correspondent photo / Robert Hayes R’Trell Miller (58) of Campbell celebrates after the Red Devils made a defensive stop Friday night in the second quarter.

CAMPBELL — The matchup between John F. Kennedy and Campbell was a key game for two teams that went into Friday night’s contest with identical 3-2 records.

It was a defensive battle for a majority of the evening, as the Eagles held a 6-0 lead going into halftime, but they ultimately held on following a fourth-quarter charge by the Red Devils to win 20-12 and improve their record to 4-2.

For Kennedy coach Jeff Bayuk, Friday night’s game was one in which he faced some old friends on the Campbell sideline.

“Well, I really dreaded this game ever since coach (Mickey) Sikora got the job,” he said. “Those guys are my best friends.”

Bayuk spent a number of years coaching with members of the Red Devils staff at Hubbard and Campbell itself, and he’s proud of the progress Campbell has been making this season. 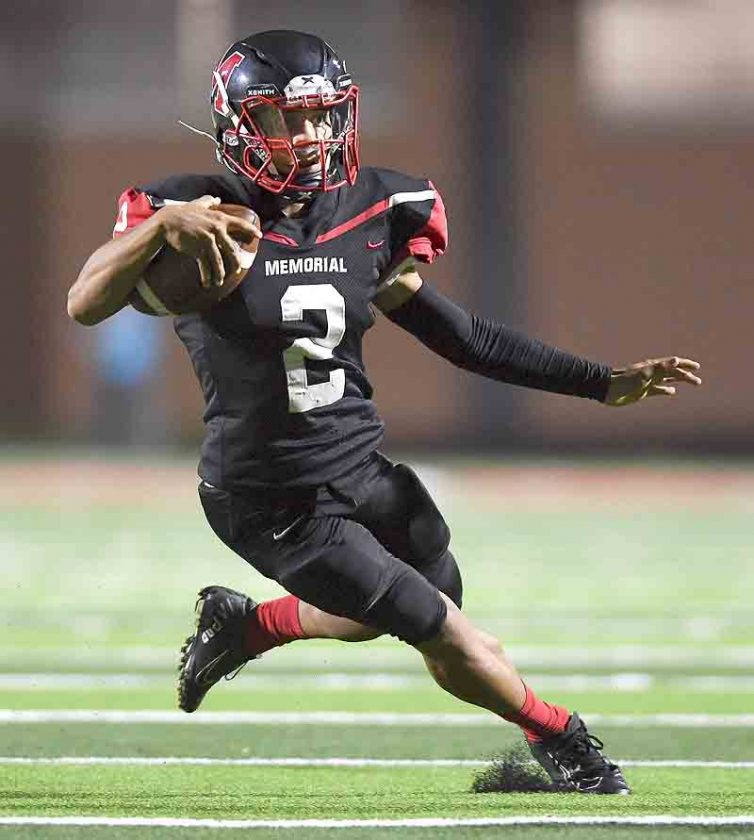 Correspondent photo / Robert Hayes Christian Stores of Campbell breaks off for a big gain during the second quarter at Campbell Memorial Stadium.

“First, our kids fight hard all year long, and I want to give JFK credit, they’ve got a great coaching staff and a winning tradition over there, and that’s what we want to become.”

He was also seeing a lot of fight in his team.

“Very proud of them, but you know, we want to win. That’s what we’re trying to get to and we’re just going to keep on chomping away and keep battling. I really love these kids, there’s always fight in these kids,” Sikora said. 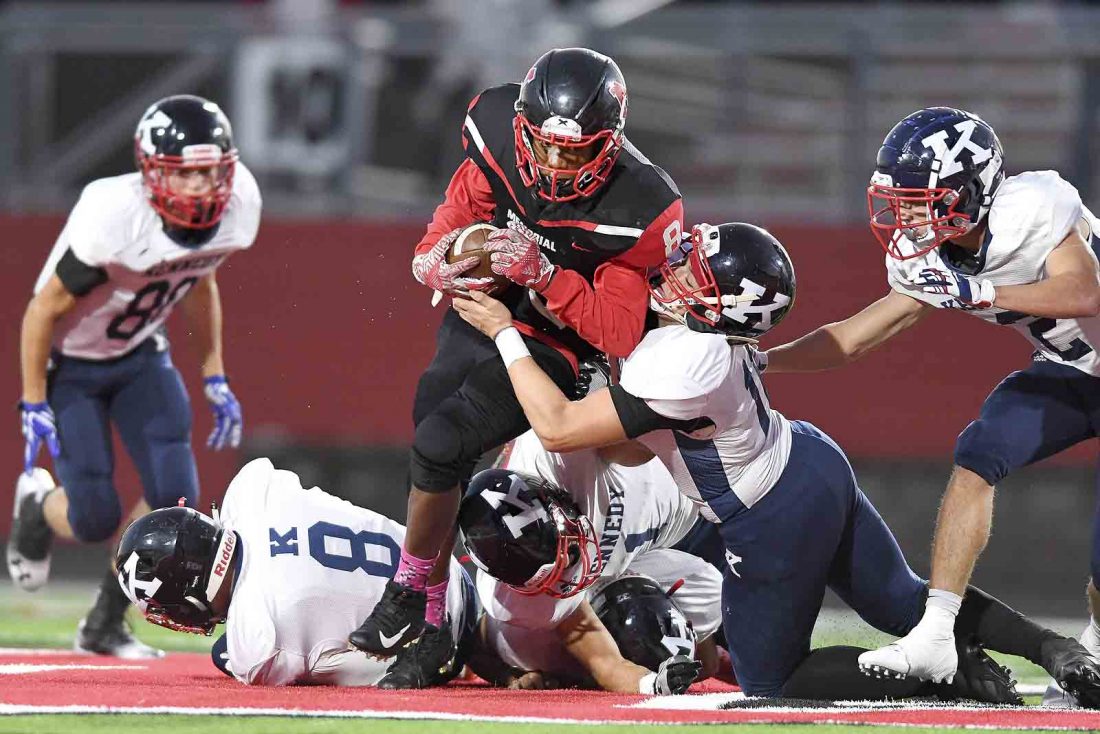 Correspondent photo / Robert Hayes Malachi Bannarn of Campbell fights for yards while running through the Warren JFK defense in the first quarter at Campbell Memorial Stadium.

He’d like to see some stuff cleaned up going into next week’s game.

“Just little things, mental mistakes. Our effort is there, I’m never going to complain about our effort, these kids give great effort.”

Gabe Green intercepted a pass off the arm of Red Devils quarterback Christian Stores midway through the first quarter on a deep ball, which set up the Eagles deep in their own territory. JFK marched down the field and scored on a 1-yard touchdown run by Cameron Hollobaugh. The ensuing PAT was blocked by Campbell’s Jontae Pabellon which made it a 6-0 game.

The Red Devils marched downfield themselves, but Nick Fordeley came up with the Eagles’ second interception at the 1-yard line to cut the Red Devils drive short.

Christian Marantis of Warren JFK broke off a 25-yard yard touchdown run in the third quarter to make it a 13-0 game following a successful PAT.

Campbell (3-3) started to make some noise in the fourth quarter when Malachi Bannarn caught a pass on fourth-and-4 to pick up a big first down and a facemask penalty on the Eagles tacked another 15 yards onto the play.

James Shaffer drove in the ball from the 1-yard line with 6:45 left in the quarter, but a failed PAT attempt left the score at 13-6 in favor of JFK.

The Eagles went three-and-out on the ensuing drive and a return by Kayvon Moore set up the Red Devils at their own 47-yard-line with over five minutes left on the clock.

Moore caught a deep ball out of bounds on third down, which set up a huge run by Stores on fourth down to move the Red Devils to the 25-yard line. On fourth down at the 24 yard line, offsetting pass interference calls in the end zone gave the Red Devils another opportunity. Stores would launched a 24-yard touchdown pass to Moore which made it a 13-12 game at the 3:17 mark.

Campbell went for two, but fumbled a pitch and Kennedy recovered the ball to preserve its slim lead. The Eagles then recovered an onside kick and started their possession at the 50-yard line. Their offense went on to ice the game when Hollobaugh scored on a 42-yard touchdown run on third-and-2, which made it a 20-12 game following a made PAT.

There was a scary situation when Moore went down after the kickoff return and the teams found themselves in a minor scuffle on the field. Moore, who has asthma, was taken off on an ambulance after falling down on the Red Devils’ sideline.

Campbell moved the ball downfield on a long pass to Nick Lopez, but the Eagles’ defense closed out the game.

Hollobaugh’s two touchdowns was a key highlight from the game, and Bayuk had tons of praise for him.

“He was alright,” Bayuk said with a laugh. “Cam Hollobaugh is a football player, he’s the kind of kid that every coach wants to have on his team. He’s ready to take the ball at any time, and he wants the ball in the toughest situations, and that’s what every coach prays for.

Hollobaugh was happy after the game.

“It’s a great win, Campbell (was) 3-2, a good team, we came out and beat them it was a great game, (a) great stepping stone for the rest of our season.”

He also wants to use the win to keep pushing forward.