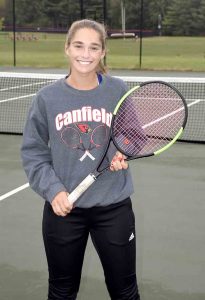 “It kind of puts more pressure on you because I already made it,” said Kan, who is a No. 2 seed heading into Thursday’s Division I Akron District. “I’m capable of making it. I’m thinking about, I made it last year, I should be easily better, I should make it this year. It’s kind of always on my mind.”

That’s her being humble.

Her coach, Pat Pavlansky, has a much different viewpoint. He tells anyone within earshot about his junior tennis player.

“I come into school and I tell all my coaching buddies and all my teaching buddies, ‘Oh my god, you have Anna in class,'” Pavlansky said. “She’s doing such a great job. You should come see her hit the tennis ball.'”

“See, you don’t know this about people,” Pavlansky said.

What Moldovan saw out of Kan was something the Canfield junior doesn’t like to say ? she’s the best female tennis player in this area and possibly one of the best in the state.

“He’s like, ‘Coach, her backhand,'” Pavlansky said. “I go, ‘I know.’ It’s a beautiful thing to watch. The gist is she does it the way you want it done. It’s not just her backhand, her whole game is good. She’ll tell you it isn’t. It is.

“Just a little more refined on when to hit what shot.”

He said Kan gets a little overaggressive, that’s something which changes with age. When this Canfield player figures things out, she goes from really good to close to unstoppable.

“When she figures that out, she is absolutely one of the best players in the state ? no doubt about it,” Pavlansky said.

Adversity, every player encounters it in the midst of play. It’s all how you handle the struggles. Kan said she talks herself out of the doldrums, but it may take a couple of games. By then, she finds her edge.

“I’ll have to think back to what goes in and just be smart of how I play, not just blast every single shot because I do that often,” she said. “That’s part of getting better.”

Confidence, Pavlansky has instilled it in his player, like he did when he was the Cardinals girls basketball coach. It’s that same can-do mentality.

He believes Kan could come away with a district title.

“We have to keep believing regardless of what happens, good, bad, whatever,” Pavlansky said. “Just keep pushing ahead and know you’re going to win the match.”

The goal is getting back to the state tournament in Mason.

“I’m pretty sure if I play well and play my game, I’m capable of beating the majority of people there,” Kan said. “I have to play well and not think about it.

“It’s just like any other tennis match I’ve played, then hopefully I make it. I guess that’s the end goal.”