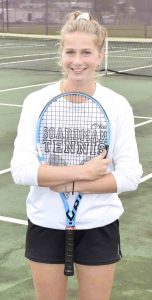 One of her players, Ava Valko, keeps returning volleys. Some go her way, some don’t.

There are no shrieks of emotion or tossing of the racquet.

Calm, cool and collected, that’s what the Boardman High School tennis player exudes each time she plays. It’ll be no different when she’s part of Thursday morning’s Division I Akron District at Springside Racquet and Fitness Club.

“She misses a ball, she calms herself down, where a lot of kids you can see the explosion starting to brew,” said Gardner, the Boardman High School girls tennis coach. “Not with Ava, she keeps it pretty calm. If she’s irritated, we don’t know. You don’t know if the girl’s winning or losing. That’s what I think she does well, keeps it under control.”

Valko, who finished as a third seed at the Division I Canton Sectional, has been at district play before. She went one-and-done last season in Akron, vowing not to do that again in 2019.

Valko began working with Gardner and other coaches and trainers to improve her game in the offseason.

“They’ve all helped me grow mentally and on the court,” Valko said. “I’m hoping I can implement it this year.”

The Spartans tennis player doesn’t plan to be an easy out this year at the district. She’s worked too hard in the offseason to let that happen.

“Ava is the kind of player we call a grinder,” Gardner said. “She’ll make balls all day long. If you’re going to beat Ava, you’re going to have to hit winners off of her, which puts pressure on people to hit a really good shot. She’s not going to go away. She’s going to fight for every point out there.”

“She’s probably one of the hardest-working girls I’ve ever coached,” Gardner said.