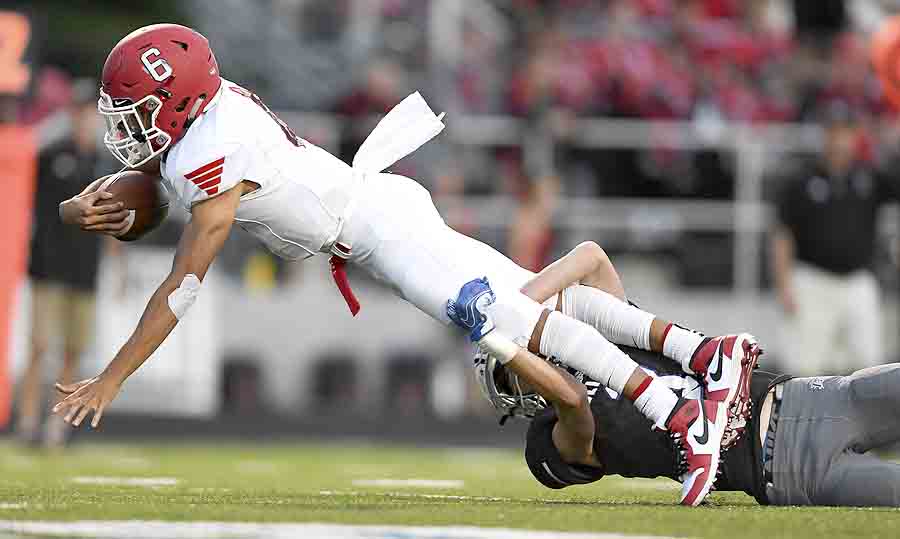 Correspondent photo / Robert Hayes Adrian Brown of Struthers extends into the end zone on a 10-yard touchdown run during the first quarter at Lakeview High School on Friday night.

CORTLAND — Both the Lakeview Bulldogs and Struthers Wildcats looked to regroup after suffering week four losses, and Friday’s night contest between the two schools represented a key matchup in the Northeast-8 Conference.

Struthers used a strong offensive attack on the ground to post a 41-6 road win over the Bulldogs.

“To come to Lakeview and come home with a victory is always a plus,” Struthers coach Curt Kuntz said. “Our guys put a lot of time in the weight room and it’s kind of what they hang their hat on. We have some really good backs and it’s just a good combination to have.”

The Wildcats (3-2, 1-1) started the scoring early as Adrian Brown scored on a 10-yard touchdown run at the 8:33 mark in the first quarter.

Brown struck again, blasting down the field for a 44-yard touchdown in the second quarter, to give Struthers a 12-0 lead. 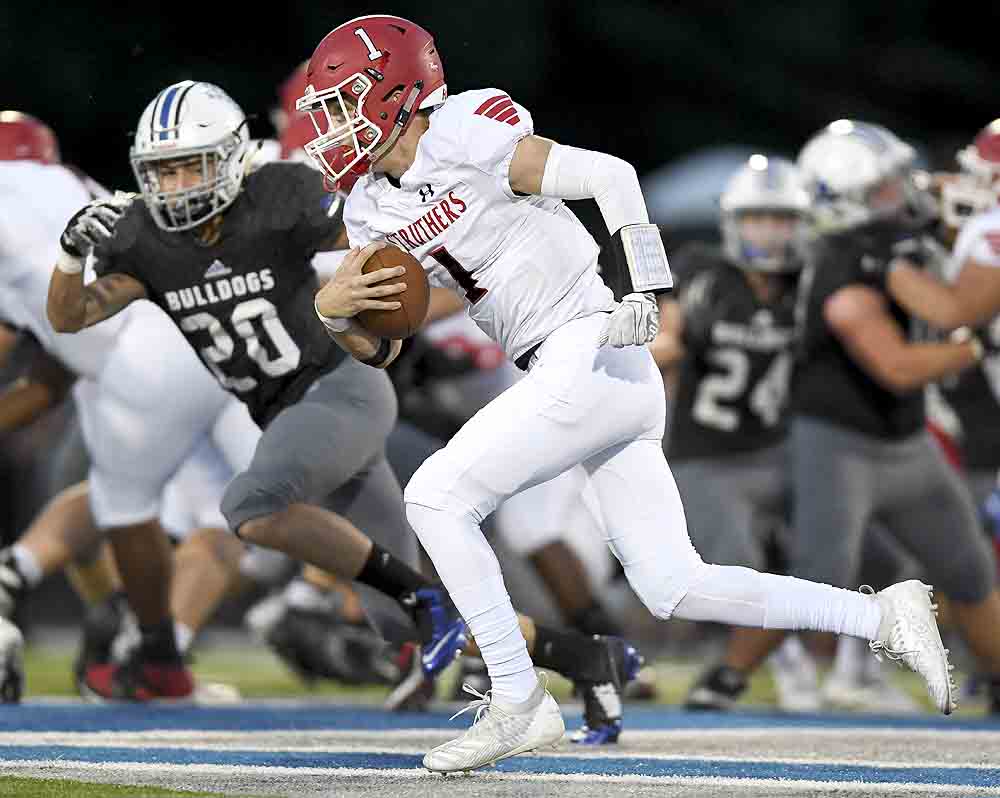 Correspondent photo / Robert Hayes Aiden Hall of Struthers runs with the ball while being chased down by the Lakeview defense Friday night.

Later in the quarter, the Bulldogs gained some momentum after Matt McRoberts intercept Wildcats quarterback Aiden Hall. On the ensuing Lakeview drive, Stephen Pavlansky tossed a 73-yard TD to Gabe Senkowitz, which would make it a 12-6 game.

The Bulldogs (1-4, 0-2) then recovered an onside kick, but an untimely interception gave the Wildcats the ball back.

Brown later found the end zone again on a 9-yard touchdown run, to give his team an 18-6 lead going into halftime. He scored again in the third quarter on a 31-yard run, and a two-point conversion by Hall increased Struthers’ lead to 26-6.

At the 11:26 mark in the fourth quarter, Brown scored his fifth touchdown on a 5-yard run, and a two-point conversion by Tyrese Hawkins made it a 34-6 game.

Later, Cam Bryant broke off a 48-yard touchdown run and Struthers kicked its only PAT of the evening for a 41-6 final score.

“I’m just really proud of our kids,” he said. “I mean they fought hard, and I mean they’re emptying the tank and they’re playing their butts off.

“We’ve just got to play better and give credit to Struthers, they’re a really good football team. They’re well coached, and we made mistakes and they took advantage of it, and that’s what good football teams do. But again, I couldn’t be more proud of our kids, and how hard they’re fighting, I think we’re getting everything out of our kids, you know, but we’ve got to coach them better, and we will, and our kids will continue to grow and get better.”

The Wildcats ended up with 318 yards of total offense compared to 202 yards for the Bulldogs.

Brown ended his evening with five touchdowns on 98 yards rushing. He gave credit to his teammates.

“They (Lakeview) looked pretty good out there, we did too,” he said. “I just want to give a huge shout out to God, my family, and my O-Line.”

For him, scoring is what helped him get stronger throughout the game.

“I get into the game a little bit more, after the first touchdown, had to keep it going, keep it pushing, and move forward.”

“I think we did pretty good, we didn’t think about it, came in, played a hard goods game, and got the W,” he said.

Kuntz is proud of what Brown can do.

“He’s played really well. He had a couple hundred yards a couple weeks ago, and he’s played well, he’s been consistent and he’s doing every single thing we can ask, blocking a lot better, there’s not much more I can ask,” Kuntz said.

“(He) gets it from his dad, the all-time leading, (in) a lot of stats at Youngstown, and you know, I think he’s really coming into his own, and we’re going to ride him a long way.”

Pavlansky wants his team to continue to put in the work.

“We’ve just got to continue to work hard. Practice is the most important thing that we do, and just continue to watch the film and get better and just keep working at it by caring about one another.”

Brown wants to ride the wave at Struthers.

“I say we just, you know, keep the same game plan, no need to switch it up, just keep it going.”