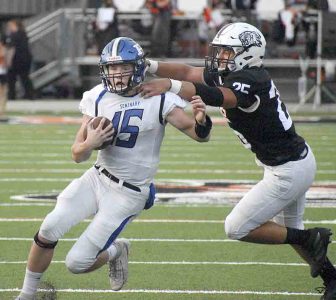 HOWLAND — In a battle between rivals, it was Howland which came out on top, taking down Poland 14-13 in a last-second win.

“It doesn’t matter whose field, who’s coaching, who’s playing, the Poland and Howland game always comes down to one score and it’s a four-quarter game,” Poland coach Ryan Williams said. “This is just another chapter in a great book of matchups between two quality football programs.”

“It was a great battle,” Boyle said. “Poland is a well-coached team and both teams continued to fight for four quarters.”

The Bulldogs got off to a 10-point lead going into halftime after a field goal by Mikey Kushner to start the scoring and a touchdown rush by Jake Rutana in the second quarter.

The Tigers made some halftime adjustments and they worked.

“We made some corrections and some changes and stuff like that and we were just correcting some technique stuff,” Boyle said. “The guys bought into it. That’s the one thing. They bought into the process and they’re continuing to do that.”

Midway through the third quarter, Howland tailback Eric Babinchak broke through the Bulldogs’ defensive line to score on a 52-yard run.

“I really hung our hat on our defense, they did a great job,” Boyle said.

Howland stayed in the game by grinding it out, and that’s what Boyle told his team going into that final drive.

“Our offense did a great job, they kept grinding and kept grinding,” Boyle said. “On that final possession I told them to just stay the course, and keep up the effort.”

As the Tigers were driving down the field, they had a bit of luck. Poland was called for an unsportsmanlike conduct that took the Tigers into the red zone.

“Things like that happen in the game, and you have to capitalize when you get the opportunity when that takes place,” Boyle said.

A couple plays later, Garrett Deemer broke through the Poland defense to get into the endzone for the touchdown with 10 seconds left on the clock.

The Tigers’ defense held the line on the “Hail Mary” attempt and Howland got its first win of the year.

“That’s really what Friday night lights is all about,” Boyle said. “Games that come down to the wire and one team emerges as the victor, that’s it.”

Opening up the new field with a win is a special feeling, something Boyle thinks will be talked about for a long time at the school.

“We’ll always remember the first time we played on turf field here and got a victory out of it,” Boyle said. “We were very fortunate for that to happen.”

Howland (1-2) faces another tough opponent on their schedule next week when it travels to Boardman. Poland (1-2) looks to get back to .500 when it opens league play against South Range.

“They’re going to be well-coached and we’re going to get working on them first thing (Saturday) morning,” Williams said.