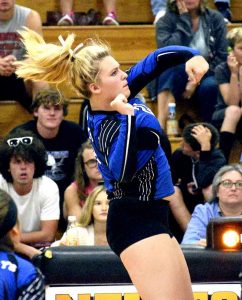 NEWTON FALLS — Showing the resiliency they’ve shown all season long, Newton Falls came back from a 2-0 deficit to beat Jackson-Milton 3-2.

“What a great comeback,” Tigers coach Kristina Baker said. “We showed some fight in the tiger tonight, that’s all I can ask for, we never gave up.”

Facing a loss, Baker gave her team the same advice she’s given them all season when their backs were against the wall. Just play.

The Tigers did just that as they stormed out in the third set to get the win 25-22. They went on to claim the fourth and fifth sets 25-23 and 15-7 completing the comeback and getting the win.

Allison Sembach continued her role as an assist machine, totalling 62 assists. She also made an impact on defense with 22 digs. Libby Barreca and Bree Hutson piled up kills getting 23 and 22 kills, respectively.

Hutson also played a large role on defense with 26 digs. Atlanta Spahlinger added on to that total with 22. Barreca had a strong front-net presence with eight blocks.

Both teams kept it close through every set. Newton Falls’ 15-7 win in the final set was the largest margin by either team. Throughout each set, neither team could keep a firm grasp on the momentum.

“We were up there a little bit and then they came back, so we needed to fight back from that,” Baker said. “We started a little down, but I thought we dug ourselves out of that hole.”

Going into the game, Baker made some adjustments to the lineup. She is proud of her girls for adapting as well as they did.

“Tonight I moved some people around and had some people playing different positions,” Baker said. “I thought they stepped up big for us when we needed them to.”

Close games bring nerves, but the nerves are something Baker welcomes. She wouldn’t want it any other way.

“It’s a good nervous,” Baker said. “You have got to be nervous every night or why do it anymore?”

The win marks six in a row for the Tigers (6-1) who haven’t lost a game since dropping their first match to Field 3-1. While they’ve had success so far this season, the season is still young and have work to do before they can take the next step.

“They need to play every night and have to play as a team,” Baker said. “I mean, you don’t get anywhere without your teammates.”

Grace McDevitt led the Blue Jays with 26 kills. Logan Grunder was close behind, tallying 23. Bailey Estes finished with 40 assists and Julia Bogden was strong on defense with 40 digs.

The Blue Jays fall to 5-3 and return home to host Waterloo tonight in a conference showdown. Newton Falls hits the road to face their bitter rivals LaBrae.

The Boardman High School girls bowling team qualified for the Division I state tournament by placing fourth in the ...

The high school girls basketball sectional tournaments were the appetizers. Now it’s time for the main ...

CANFIELD — The South Range girls basketball program has long been a successful one with numerous league, ...