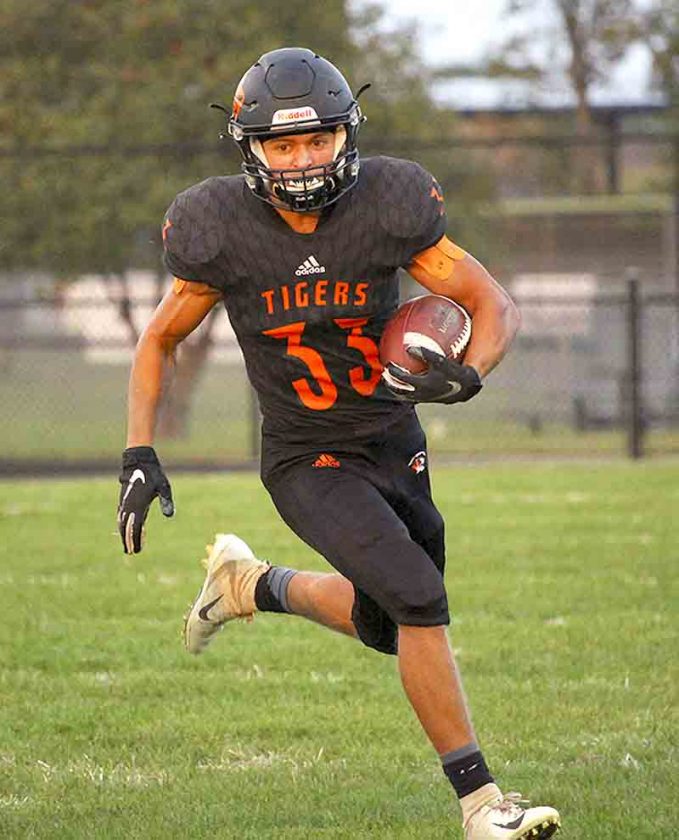 NEW MIDDLETOWN –If there was one thing to bet on entering Friday night’s matchup between the Columbiana Clippers and the Springfield Tigers, it was a lot of points.

Unfortunately for Columbiana, the Tigers did all of the scoring in a dominating 35-0 win for Springfield.

The scoring started when Springfield quarterback Beau Brungard threw a strike to the left corner of the end zone, as receiver Garrett Walker hauled in the 21-yard pass to give the Tigers a 7-0 lead with 9:23 in the first quarter.

It was a lead they never gave back.

“If we do our job, we put ourselves in a good position,” Springfield coach Sean Guerriero said. “I give credit to an overall victory to everybody on our team, including our staff.” 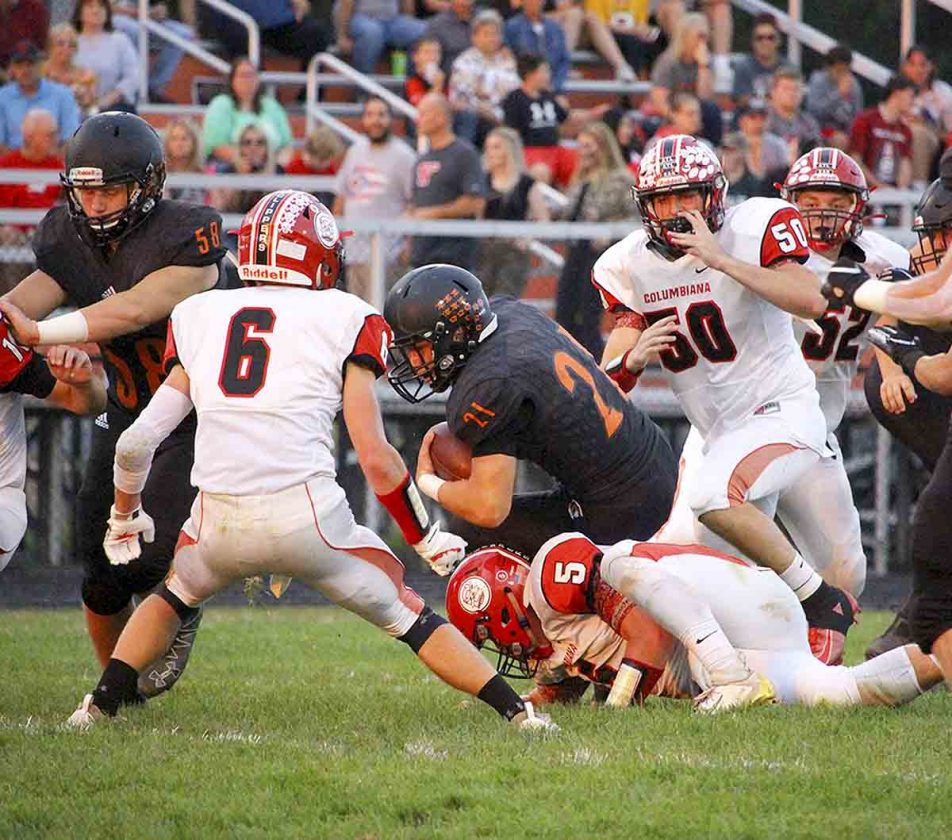 Correspondent photo / Scott Lendak Springfield sophomore quarterback Beau Brungard gets tackled after picking up a first down in Springfield’s win over Columbiana.

After a few empty possessions by both teams, Brungard extended the lead with his legs, scampering for a touchdown from 25 yards out at the 9:47 mark of the second quarter.

“Let’s give Springfield a lot of credit,” Columbiana coach Bob Spaite said. “They have a great coaching staff, a great team and a great tradition. They do things the right way, and they’ve always given us trouble.”

After recovering a fumble in Clipper territory, the Tigers methodically drove down the rest of the field right before half. Junior running back Austin Tindell capped off the drive with a 4-yard touchdown run, leaving just 1:18 on the clock in the second quarter. Tindell led the team with 119 rushing yards on the night.

The Tigers dominated the first half on the ground, rushing for 154 yards and two touchdowns.

“We continuously try to get our playmakers the ball,” Guerriero said. “Up front we dominated tonight. That was one of our goals. If we can establish the run, there is a lot we can do offensively.”

Brungard made his presence felt on both sides of the ball, taking a third-quarter interception 75 yards to pay dirt to give the Tigers a 28-0 lead. The interception resulted in the only points scored in the period.

After the Clippers scored 41 points in their last contest against McDonald, the Tigers held Columbiana to just 125 total yards, while turning over the Clippers four times.

“I was so happy with the way our defense played,” Guerriero said. “For how many weapons Columbiana has, I can’t give enough credit to our defense and the way they played. I just love the effort we had tonight.”

Springfield sophomore running back Aaron Groner’s 6-yard touchdown run with 3:11 left put the finishing touches on an impressive performance from the Tigers.

“Playing a complete game is the difference between a good team and a great team,” Guerriero said. “For us to come out and play a second half like that, I have to give a lot of credit to our senior leadership.”

“I feel like we can do a lot of things as long as we block up front and protect Beau,” Guerriero said. “He’s a great playmaker, and I think it makes it hard for teams to scout against us because we have so many weapons. We do a great job of mixing it up, and our kids are just playing hard right now.”

The Clippers will hope to bounce back when they host the Southern Indians next Friday.

“We didn’t execute,” Spaite said. “Right from the jump, offensively and defensively they did whatever they wanted. You have to execute. You are not going to beat a good team turning the ball over like that.”

The Tigers will look to continue their winning ways as they travel to Lowellville to take on the Rockets next Friday.