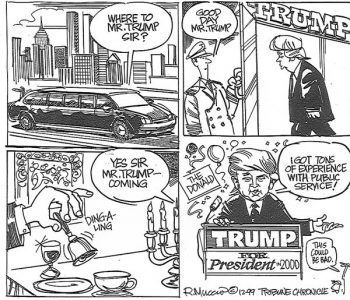 I meet weekly with Rick Muccio, the freelance artist who creates local editorial page cartoons for this newspaper. He drops by about once a week to pitch cartoon ideas he has for possible use on these pages.

While we don’t always agree on political topics of the day, I enjoy chatting with Rick because he always is well-versed on national politics and news of the day.

And he has a much better memory than I do.

That was especially evident last week when he produced a cartoon about Donald Trump that he had drawn in late 1999. The cartoon was published Dec. 19, 1999, in the Tribune Chronicle, and Muccio even still had the yellowing newspaper page on which it had appeared.

The cartoon, reprinted here with my column today, poked fun at Trump’s claims at that time of his public service record. Trump had been toying with a run for the presidency at that time.

I truly didn’t remember that, but, then again, as my staff will tell you, I rarely remember much. (I think sometimes that works to their benefit.)

I don’t refer to Muccio’s 1999 Trump cartoon simply to dredge up the past, but more to point out that the day it published, Dec. 19, 1999, is exactly 20 years before this newspaper published last week’s front page story reporting that now-President Donald Trump had been impeached.

And that’s not all.

What is it with this date?

Specifically, Clinton was charged by the House with one count each of lying under oath and obstruction of justice. Clinton was acquitted in February of 1999 on both counts.

Of course, 17th U.S. President Andrew Johnson also was impeached, but that wasn’t on a Dec. 19. Rather, that impeachment occurred Feb. 24, 1868. He, too, had been charged with “high crimes and misdemeanors,” detailed in 11 articles of impeachment, and the Senate also failed to convict him on even one count, and so he, too, remained in office.

Trump is now facing charges of abusing his power and obstructing a congressional investigation. The impeachment came along party lines by a starkly divided Congress.

Trump has denied any wrongdoing, and in a letter this week to House Speaker Nancy Pelosi he likened the proceedings to the Salem Witch Trials and said the impeachment “represents an unprecedented and unconstitutional abuse of power” and accused Democrats of turning a “policy disagreement between the two branches of government into an impeachable offense.”

Certainly, the act of attempting to remove any president from office never should be taken lightly — nor should the responsibility of investigating the authenticity of the claims by trial in the Senate.

Still, it appears, history is on Trump’s side, as the past two impeachments demonstrate that attempts to remove presidents from office (especially by members of Congress who might disagree with his policies, style or administration) have proven unsuccessful in the past.

Few political experts believe the results of Trump’s trial will be any different, especially given the large Republican majority in the Senate.

Either way, Rick and I — like you and the rest of the nation — will be watching with great interest as the Senate works out details of the impending trial of our president.

It is, of course, educational for us all. It’s history in the making, after all.

And, I suppose, we also should pay close attention to Congress every year as Dec. 19 approaches.

“It’s a murder hornet,” the headline in Monday’s Vindicator warned. Sure, that might sound frightening, ...

The thought that kept flashing through my mind Monday was, “And I thought things were tough here.” I was ...

In Ohio, like most states, residents may easily access a public database of disciplinary records involving any ...

Little did we know when my eldest son, a senior at Youngstown State University, headed off in March to Fort ...