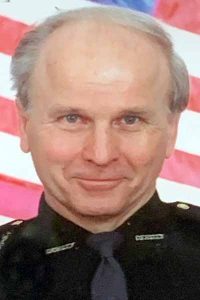 Steve was born July 10, 1936, in Youngstown, a son of Stephen and Justina Leskovar Jasecko. He was a lifelong area resident.

Steve graduated from Canfield High School in 1954, started working as a contractor with Klacik plastering and enlisted in the Army and served his country until 1962.

After serving his country, Steve started his own plaster renovation business, working on large projects such as the old Powers Auditorium, Mahoning County Courthouse and the Wick Pollock Inn. In the mid-80s, Steve was a reserve deputy sheriff in Mahoning County. In 1992, he started working full time with the Mahoning County Sheriff’s Department, retiring in 2002.

Steve was very involved in the community. He was a member of the Youngstown Shriners, Master of Masons Allen Lodge in Columbiana, Archaeologist Society, American Legion Post 290, AMVETS Post 312, VFW 5532, Eagles 4701 and Moose Lodge 467 in East Liverpool. He was also a member of St. Jude Catholic Church in Columbiana.

He also leaves his sisters, Rosemarie Klacik of Austintown, and Carmelita Tomich and Helen Martini, both of Clearwater Fla.

Besides his parents, Steve was preceded in death by his first wife, Roseann Lucas, whom he married April 4, 1959, at Holy Trinity Church in Struthers, and sadly, passed Sept. 8, 1994; his son, Steven D. Jasecko, who passed Dec. 30, 2010; and his brothers-in-law, John Klacik, Victor Tomich and Ben Martini.

Family and friends may call 4 to 7 p.m. Thursday at the funeral home.

Family and friends may visit www.foxfuneral home.org to view this obituary and send condolences.