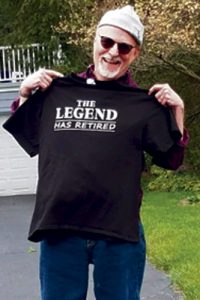 YOUNGSTOWN — Mark Womble never thought he would be a victim of a drive-by.

The quiet, 67-year-old now-retired professor of biology was surprised on May 1 when colleagues and former students drove by his Liberty home in a procession to show their respect and admiration for the man who shaped the minds and careers of countless Youngstown State University biology students.

“It was a surprise,” said Womble, Ph.D., whose courses focused on anatomy and cell biology. “My wife had to get me out of my office. It was not something I expected.”

Even in the age of social distancing caused by the coronavirus pandemic, the school wanted to do something special for the longtime professor on his retirement.

Womble said as early as the sixth grade, he knew he wanted to be a scientist. His father, Joe Womble, was a medical doctor, so he had an appreciation for learning how things work.

A Houston native, he was a scientific researcher for 12 years in Denver, and earned his doctorate while working in the Department of Physiology at the University of Michigan.

Although he was able to live his childhood dream of being a research scientist, Womble said becoming a teacher has been one of his life’s most unexpected joys.

“Doing full-time science was not really my strongest point,” he said. “You’re always looking for grant dollars. What I’ve always enjoyed has been explaining science to friends and family.”

It was his wife, Mary, that told Womble he would be an excellent teacher.

“I have to give her credit in seeing that in me,” he said.

He has lived most of his professional life in northeast Ohio, helping thousand of impressionable college students become doctors, dentists, physical and occupational therapists, as well as sharpening the minds of others to explore scientific thought.

“My goal always has been to make sure students have a strong foundation in biology so they will be prepared wherever they go in the next phase of their education,” he said.

“Science is the best way to determine how things work and make forecasts on how things may come about, especially in terms of health care and climate change,” he said. “It is never perfect. But using scientific principles of testing, finding data, comparing your hypothesis to others and tweaking the results leads to logical thinking.”

The best way to fight against the trend of those doubting science is to continue to provide verifiable and scientifically tested information.

“It is easier to discredit ideas that are passed around on the Internet if the foundation of your position is strong,” he said. “The way to push back is to show the scientific process, evidence and support.”

Over the years, Womble has witnessed a lot of changes in technology, especially with the increase of online learning.

“The students that have come to YSU have not really changed,” he said. “Most are inquisitive and motivated. They are hard-working, focused and interested in learning. Many are full-time students and are working multiple jobs to earn enough to attend school.

“I’ve been amazed and motivated by how much they are able to get done,” Womble said.

“I’ve enjoyed teaching, interacting and mentoring students. Showing them scientific methods and how the body works. Students have kept me young.”

Chet Cooper, 62, a biology professor at YSU for the past 20 years, described his friend as very student-focused and caring about the needs of not only his students, but any that he could assist.

“He was an outstanding adviser and a deep thinker,” Cooper said. “He could look at the big picture, but also focus on the smallest details. He is very organized. We will really miss that.”

Cooper said Womble taught students how to learn, instead of memorizing information.

“We have had students come back from medical school who described themselves being so far ahead of their fellow students because of what they learned from Mark,” Cooper said. “He’s an excellent teacher.”

Womble has used the notes from his lectures to write “Introduction to Human Gross Anatomy: A Regional Guide,” which is now the primary book used in YSU’s biology department. It has been out for approximately eight years and is in its fifth edition.

“I wrote the lectures, which became the foundation for the book, because I could not find an undergraduate book that presented the course in the way I wanted,” he said. “I wanted to present systems like they would learn in a graduate level medical school program.

“When students leave here and go to medical school and other graduate level programs, they should be as well prepared, if not better, than students from any other university in the country,” he said. “They should be able to integrate information from all of the biology courses they’ve taken at YSU. How all of the courses they’ve taken work together.”

After 25 years of teaching, Womble said he is ready for the next phase of his life. He and Mary plan to do a lot of traveling, and he hopes to renew a passion of making stained-glass windows.

“I’ve not had a chance to make them in recent years,” he said.