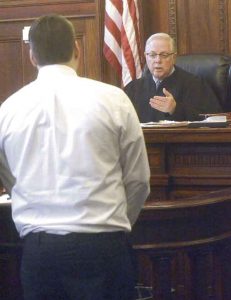 Staff photo / R. Michael Semple A defendant dressed for business stands before Judge Anthony Donofrio in Mahoning County Common Pleas Court. The court does not have a building-wide dress code, though a judge can jail or punish someone for the way they’re dressed for a court appearance. But an appeals court recently reversed a decision by a Mahoning County Area Court judge, who found a Kentucky man in contempt of court for wearing his laborer’s clothes to court. One judge observed that most people in courtrooms dress “like when you go to church or a wedding. You dress in your Sunday best.”

YOUNGSTOWN — Can a judge jail or punish someone for the way they’re dressed in court?

A ruling in a Mahoning County case addressed that question.

An appeals court reversed a decision by a Mahoning County Area Court judge, who found a Kentucky man in contempt of court for wearing his laborer’s clothes to court.

The reversal means the contempt charge is dismissed.

Chad A. Smith, 36, of Tollesboro, Ky., was cited by North Jackson police on Sept.14, 2017, for failure to control his motorcycle while driving it on Mahoning Avenue. Smith appeared in Mahoning County Austintown Area Court Sept. 22, 2017, for his arraignment.

After calling Smith’s case, the judge at the time, David D’Apolito, now a 7th District Court of Appeals judge, asked Smith, “Did they tell you I have a dress code here?” Smith said, “(T)hey did when I got here, yes.” At that point, the judge told Smith to have a seat in the jury box because “(we) hold people in contempt for that.”

Smith’s attorney, Rhys Cartwright Jones, filed an appeal of the judge’s ruling and also a stay of the sentence pending appeal. He did not serve any jail time or do any day reporting.

The appeals ruling says Ohio law allows a judge to “summarily punish a person guilty of misbehavior in the presence of or so near the court or judge as to obstruct the administration of justice.” It’s known as direct contempt of court.

An appeals court panel “may not assume, in the absence of record evidence to the contrary, that the action of the lower court was correct and lawful,” the decision says.

Cartwright Jones, argued in the appeal that a “one time dress code violation does not give rise to direct, criminal contempt deserving of a summary punishment.”

He said Smith had come to court directly from an outdoor labor job and was still in his laborer’s clothes. His attorney argued that Smith had no prior knowledge that he had to dress a certain way “as he only had a traffic citation which contained no language about court attire.”

He “engaged in no disagreement with the (judge), yet he was sentenced to jail,” Cartwright Jones stated.

The Mahoning County Prosecutor’s Office, which served as legal counsel on behalf of the area court and D’Apolito, argued that Smith’s attire was “so lacking in decorum and dignity that it constituted a threat to the administration of justice.” They also argued that his attire “would demoralize the court’s authority if it did not instantly address his attire and punish [Smith].”

In its ruling, the appeals court stated that the county’s attorneys provided no evidence “suggesting what the court’s dress code permitted or prohibited.”

They also did not provide any evidence of what Smith was wearing “or why or how these garments were in violation of the court’s dress code,” the ruling stated. They also did not submit any evidence showing how Smith “or his apparel interrupted or disrupted the court’s proceedings, or threatened the administration of justice. Therefore, we find the record does not support the contempt citation.”

The county was required to pay the costs of the appeal.

A review of policies at other courts reveals there are variations in what judges expect from defendants and the ways judges enforce those expectations.

*These prohibitions are policed by the court’s security personnel, who are stationed in the hallway. The summons one defendant showed The Vindicator had a warning on it, giving a slightly different list of banned clothing, including “sleeveless shirts or dresses.”

Last month, those policies snared Jill Corrigan of Youngstown, who appeared for court wearing a pair of modestly “ripped” jeans. They had a small rip near one knee. Her skin was not exposed because of a leggings-type of garment she wore underneath.

But court personnel made her aware she could not go before the judge that way and was instructed to either find other pants or wear a pair of orange Mahoning County Jail sweat pants, a courthouse equivalent of a “scarlet letter,” designating her as a dress code violator.

She was observed as she left the courtroom after her hearing and removed the sweat pants in a janitor’s closet.

“This was my first time here, so I didn’t pay attention,” Corrigan said. “They said ‘Mam, you’ve got ripped jeans.’ If there is a next time, I will definitely read the fine print,” she said of her summons. “It was definitely embarrassing, so read the small print.”

“I just say dress appropriately,” Atty. Devon Stanley said of his instructions to clients about how to dress for court, whether it’s a Mahoning County area court, Youngstown Municipal or courts in Trumbull County.

Stanley said there are some courts where outdoor working clothes may be acceptable, but when someone comes to a common pleas court, “I tell them to wear a suit or dress shirt and pants” because judges there typically hold people to a higher standard.

Cartwright Jones said some attorneys including him provide clothing guidance on a cover letter to a client regarding his or her hearing.

He said he tells them to “show up like you would for a wedding or funeral or other important event.”

The Mahoning County Common Pleas Court does not have a building-wide dress code, but Judge R. Scott Krichbaum has one.

Krichbaum, who has been a common pleas court judge 29 years, was a defense attorney 11 years and worked as a bailiff four years dating back to the 1970s. He said he learned to appreciate the “majesty and dignity” of the court then and has upheld similar beliefs throughout his career.

He observed that most people in courtrooms “dressed for court, like when you go to church or a wedding: You dress in your Sunday best.”

As a lawyer, he once bought a client in a criminal case a suit for more than $100 at a downtown store so he could wear it to court.

“I think it’s disrespectful to come to court not appropriately dressed, as if you are going to play basketball or a day in the park,” he said.

To give defendants fair warning, he tells them the first time they come before him that one of the conditions of their bond is that they come to court appropriately dressed.

The first time someone comes inappropriately dressed, they will be ordered to wear an orange Mahoning County Justice Center jumpsuit. If it happens again, he or she will be held in contempt of court and taken to the county jail, he said.

He has not had to order a jail jump suit or send someone to the jail very many times in recent years, he said. He suspects it’s because most people know his policy.