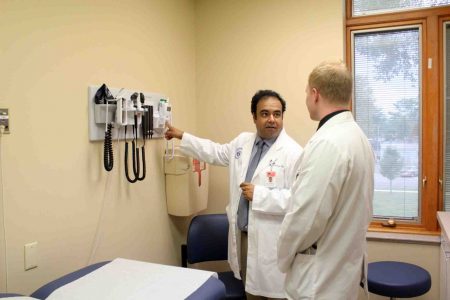 YOUNGSTOWN — Forty years ago Thursday the Family Medicine Clinic at Northside Regional Medical Center opened its doors, bringing medical access to the community from infancy to the golden years.

Since 1979, the residency program through Western Reserve Health Education has graduated 115 family medicine residents, more than two dozen of whom are practicing locally. There are now 15 young doctors in the program, with three more expected to join the ranks next year.

Doctors and residents celebrated their 40th anniversary in conjunction with the grand opening of the family center’s sister site at Trumbull Regional Medical Center in Warren. The new facility in Warren will fill a need in the community caused by a lack of family doctors in the area, according to Dr. Steven Swain, who will rotate between the two sites.

Residents also will be split between the two locations.

“Going through residency… is a very stressful period of time,” said Dr. Paul Rich, director of the Family Medicine Residency Program. He said the current residents have taken in stride the closing of Northside and now fluctuating between two medicine centers — something they didn’t have to do before.

She said the residency program is helping to fill a physician shortage in the area.