25 years of helping kids at the Rich Center 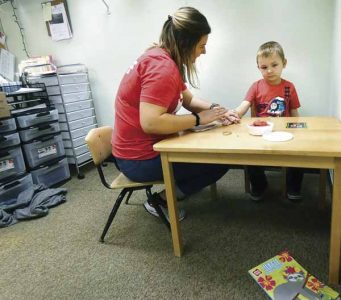 Staff photos / Raymond L. Smith Teacher Erica Porch works with student Killian Sisson at the Rich Center for Autism in Youngstown. Killian, 5, has been a student at the school for two years and has grown from not being able to speak to being a better communicator. “They have honed in on the way he learns,” dad Vinny Sisson said.

YOUNGSTOWN — Jared McConnell has been a student at the Rich Center for Autism for about 12 years, and his parents credit the school with helping him to develop into a person who can accomplish his dreams.

McConnell, whose skills were behind others his age when he was diagnosed as being on the autism spectrum, has grown from someone barely able to communicate to someone his mother, Marilyn, now believes will be someday be able to work in society.

Brian and Marilyn McConnell learned about the school shortly after Jared turned 6 and they had put their son though other programs.

It wasn’t long after he began attending the Rich Center that he began talking more and being able to participate in activities with others.

“We like the nearly one-on-one work he has been able to get here,” Marilyn McConnell said. “It has provided an environment that understands autism and looks for ways to help him function and thrive in the world.”

The center is celebrating its 25th anniversary while doing a capital campaign that will allow a significant expansion of the school, located in Fedor Hall on the campus of Youngstown State University.

The center, which provides educational opportunities for children diagnosed with autism, has been given use of the entire two-story building. Adding the second floor has increased the size of the school by 43,000 square feet.

“YSU, which owns the building, has allowed us to be in it at no cost since our founding,” said Phyllis Ricchiuti, chairwoman of the Rich Center’s trustee board.

The estimated cost for the renovation is $7 million. YSU has donated $1 million toward the renovation costs, and the school, through early fundraising efforts, has raised $2 million.

Money will be used to place a new elevator that is Americans with Disability Act compliant, remove asbestos tiles from the floor, put on a new roof, provide new lighting, place a new sprinkler system in the structure as well as provide other improvements. It is also redoing rooms in the basement.

The Rich Center for Autism began in 1995, after Richiutti’s son Anthony Rich, his wife Paula (Rubino), and their unborn child were among the 127 people killed Sept. 8, 1994, in a USAir crash near Pittsburgh International Airport.

During the months after their deaths, Ricchiuti and the parents of her daughter-in-law received a total $25,000 in donations from area residents, with which they initially did not know what to do.

In the meantime, a relative, who was raising a young son diagnosed with autism, was struggling to get the extra help he needed.

“We decided to open a school for autistic children,” Ricchiuti said. “I feel that God put Tony and Paula on this earth … so that the Rich Center would be started.”

YSU leaders liked the idea of a school for autistic children and were supportive from the start, according to Ricchiuti. The university provided space for the school at no cost to its operators.

“It has been very generous,” she said. “We receive no operational funds from the university. Funding sources include Ohio’s Autism Scholarship Program, contracts with school districts, grants, appeals, fundraising events.”

The school’s average annual operational costs are $2.5 million, she said.

Students attending the school primarily come from four Ohio counties — Mahoning, Trumbull, Ashtabula and Columbiana — as well as some students from Pennsylvania.

Vinny and Tess Sisson, whose son Killian, 5, has been a student at the school for two years, said they placed him in another school for autistic children before finding the Rich Center.

“This is just a better fit,” Vinny Sisson said. “We like the educational structure and teaching style better. He has grown from not being able to speak any words to having a larger vocabulary. They have honed in on the way he learns.”

Sisson describes what is being done at the Rich Center as very individualized to the student, while simultaneously teaching them to work with others.

The Sissons expect to have their son attend the center through the 12th grade and beyond. They said they have no intent to place him in a public-school setting.

“It would be unfair to him and the other students in the public schools,” Vinny Sisson said.

The center began with three students and now has about 65 students and 45 employees. It also has a program in Boardman that has 10 students.

Gregory Boerio, director of academics, said the school has a two-to-one ratio between students and teachers.

“We provide all of the basic academic required courses available at other schools, but also applied behavior analysis; speech, language and occupational therapy; as well as therapy services that may be similar, but not connected to therapies students may be receiving,” he said

The Rich Center is open to children as young as 2-and-a-half years old through 22 years.

“We work with parents and caregivers that want to send their students to other traditional public schools if that is what they want,” Boerio said. “However, we also can provide students their entire education, providing them the resources to continue their educations or work.”

One out of every 59 persons in the U.S. are on some level of the autism spectrum, according to Boerio.

Other schools in the Mahoning Valley specialize in working with autistic students. Most school districts have programs that work with students with special needs. Some parents, like the Sissons and the McConnells, have noted they prefer schools that specialize in the specific needs of their children.

“It is not a blanket criticism of these schools, but their classes generally are designed to help larger classrooms of students and not the individual needs required of some autistic children,” Vinny Sisson said.

The Rich Center for Autism, a component of the Beeghly College of Education, has set a mission to prepare educators, medical specialists and other professionals in best practices for teaching and caring for these special people; to increase the knowledge base through the promotion of scholarly research in a living laboratory; and to provide public service and advocacy on behalf of those affected by autism.

“Being on the YSU campus, we are working directly with professors and others doing programs that work with students that may be on the autistic spectrum,” Boerio said. “If children diagnosed at early age, getting them speech and language support is essential.”

Students attending the Rich Center are considered under a homeschool program, so the school is not under the state report card system.

“We are a center under the Ohio Department of Jobs and Family Services,” he said. “We are an alternative education option. We are an autism scholarship provider.”