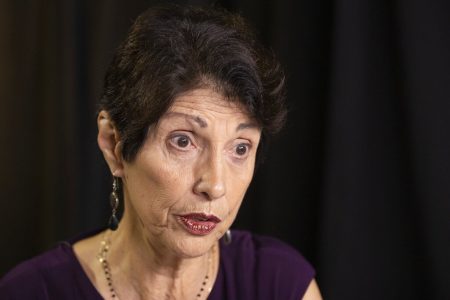 In this June 19, 2019, file photo, Diane Foley, mother of journalist James Foley, who was killed by the Islamic State terrorist group in a graphic video released online, speaks to the Associated Press during an interview in Washington. Family members of Americans who are imprisoned abroad or held hostage by militant groups say in a new report that the U.S. government must do better in communicating with them. The report from the James W. Foley Legacy Foundation is based on interviews with 25 former hostages and detainees as well as their relatives and advocates. (AP Photo/Manuel Balce Ceneta, File)

WASHINGTON (AP) — Relatives of Americans who are wrongfully imprisoned abroad or held hostage by militant groups say in a report issued this morning that the U.S. government still must do better in communicating with them, though improvements have been made over the last five years.

Several of those interviewed for the report say they don’t feel their loved ones’ cases have the attention of the highest levels of government. In particular, family members of Americans who are detained by foreign governments on trumped-up charges say they feel those cases are less of a priority to the U.S. government than cases involving hostage-taking by militant or criminal groups.

The report from the James W. Foley Legacy Foundation is based on interviews with 25 former hostages and detainees as well as their relatives and advocates. It cites improvements in the government’s response since the government overhauled its hostage policy five years ago, but says relatives still want more complete and accurate information and clarity about which agency is supposed to help them. Some, for instance, want the government to declassify more information so that it can be more easily shared, or to provide limited security clearances.

The report is the latest outside effort to scrutinize how the government interacts with hostages and detainees and their families back home. It examines the changes to hostage policy that were instituted by the Obama administration in 2015 and that largely remain intact under President Donald Trump. Those include the creation of an FBI-led hostage rescue fusion cell and the appointment of a State Department envoy for hostage affairs.

The policy revamp followed the beheadings of Westerners, including Foley, a freelance journalist, at the hands of the Islamic State group in Syria. Relatives of hostages demanded changes after they said U.S. officials threatened prosecution if they tried to pay ransom, kept them out of the loop on rescue attempts and didn’t clearly communicate government policy.

Foley’s mother, Diane, established the foundation to raise attention for hostage issues and to advocate for Americans held overseas.

The report says the policy improvements have been effective and durable, resulting in better government access for hostage families as well as more resources. But it also says that families of other detainees don’t feel like their cases are prioritized in the same way.

The U.S. government distinguishes hostages who are captured by overseas criminal organizations or by militant groups designated as terrorists from detainees who are held by foreign governments, often arbitrarily or on exaggerated or fabricated charges. The distinction matters in terms of which government agency is responsible for the case.

Though the hostage policy overhaul sought to establish lanes of responsibility within the government’s response, several of the report’s participants expressed confusion about which agency was supposed to be their primary point of contact.

Most relatives of hostages who were interviewed said they felt they had reliable access to the government, but relatives of detainees did not feel the same, with one family advocate saying they “had to work way too hard to get the State Department’s attention and help.”

The State Department did not respond to a request for comment, and the FBI had no immediate comment.

“There is a notable disparity in the treatment of hostage and wrongful detainee families by the U.S. government, with the latter receiving less attention, information, and access,” the report said. It said “the U.S. government can do more to support the families of those Americans wrongfully detained abroad.”

Several interviewees said they were concerned about having less access to the State Department’s hostage affairs office because of recent turnover there. Robert O’Brien, the official who used to hold the position, is now Trump’s national security adviser.

The Trump administration has made the return of hostages and detainees a priority. Officials have eagerly touted the release of multiple high-profile Americans as validation of those efforts. Danny Burch, an American held for 18 months in Yemen, was freed last year, and Kevin King, an American professor, was released by the Taliban in a prisoner swap last November.

Still, other cases remain unresolved or have not had positive outcomes.

American journalist Austin Tice remains missing after vanishing in Syria in 2012. Trump recently mentioned Tice by name in saying that the government was working to bring him home.

Last week, the family of retired FBI agent Robert Levinson, who vanished on an unauthorized CIA mission to Iran 13 years ago, said it had been told that the U.S. government had concluded that he was dead. U.S. officials have not said what evidence led them to make that determination, though FBI Director Chris Wray said in an email to the workforce that “the most credible evidence” to date pointed to his death.