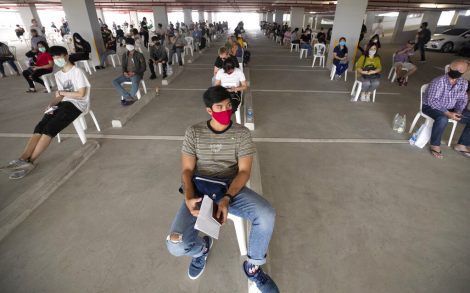 Tourists practice social distancing as they wait to extend their visa today at Immigration Bureau in Bangkok, Thailand. Tourists across Asia are finding their dream vacations have turned into travel nightmares as airlines cancel flights and countries close their borders in the fight against the coronavirus pandemic. (AP Photo/Sakchai Lalit)

PHUKET, Thailand (AP) — From the sun-soaked beaches of Thailand to the foothills of Mount Everest in Nepal, tourists across Asia are finding their dream vacations have turned into travel nightmares as airlines cancel flights and countries close their borders in the fight against the coronavirus pandemic.

Thousands of tourists escaping cold weather in Europe were scrambling this week to find alternative ways to return home from the Thai island of Phuket in the Adaman Sea.

Ksenia Vostriakova and her friends were scheduled to fly back to Moscow on an April 3 Singapore Airlines flight, but it was among those canceled when the airline slashed its operations. They have booked a flight on Qatar Airways for April 6 and are hoping nothing else changes.

“Now we’re really worried that this flight also might be canceled,” Vostriakova said, adding that their Thai visas run out in mid-April. “We might still stay here because everything changes.”

Thailand went under a state of emergency this week as the government gives itself new powers to deal with the virus crisis. The country, which last year welcomed 39 million tourists, announced it was closing its borders to nearly all foreigners. Its national airline, Thai Airways, said it was suspending almost all of its flights.

It’s a trend seen around the region and the world. The Airports Council International Asia-Pacific said today that 12 major hubs in Asia-Pacific had seen an average decrease in air traffic of more than 80 percent in the second week of March versus the same period last year.

Up to 10,000 tourists are believed to be stranded in Nepal after the government ordered a complete lockdown that halted all flights and road travel to prevent the spread of the virus, the country’s tourism board said. Most businesses and government offices were also shut.

Spring is the tourist season for Nepal when thousands of visitors come to hike the mountain trails.

At the Lukla Airport, the only gateway to the Mount Everest region, there were more than 200 trekkers stranded, according to Dhurba Shrestha, an airport official. Even if the highways were open, the closest road is three days trek downhill.

Officials were working on arrangements of special flights to at least get tourists back to the capital, Kathmandu.

The German government today arranged a rescue flight — a Qatar Airways charter — that left the capital with 305 people on board, mostly German nationals.

In Kathmandu’s tourist enclave, visitors could still be found wandering around empty streets. A handful of restaurants and hotels were still open, but most shops were shuttered. Police were blocking locals from moving around but not tourists.

“We were supposed to leave on March 21 but we are still in Nepal and waiting for our embassy to help us arrange a flight,” said New Lee Kuan, from Malaysia.

The Indian Ocean island nation of Sri Lanka said that it was ready to help an estimated 18,000 tourists return home either via scheduled flights that are still operating or special charters if required. The country is under a nationwide curfew until at least next week.

In Indonesia, more than 2,500 foreign tourists were stranded in Bali, the most famous of the country’s more than 17,000 islands. The government has granted all tourists automatic visa extensions, a move made after long lines formed at immigration offices.

“This is good news that helped us a lot,” said Ruben Evert Ernst, a German on vacation with his partner whose visa had been set to expire in a few days.

Visitors to Thailand haven’t been so lucky. Hundreds of tourists seeking visa extensions were crowded today under a row of awnings next to a makeshift immigration office that’s been set up on the outskirts of Bangkok after throngs formed at the main building. There wasn’t enough room for the tourists to keep their distance and stay in the shade so most were pressed up almost against one another.

“I woke up today at 5:30 to get here on time so it’s very stressful,” said Murdoch Baghaie, from Sacramento, California. “I’m supposed to be a tourist enjoying the scenery. Nothing like enjoying Thailand anymore.”

Shopping malls, bars, sit-down restaurants, public swimming pools and many other places have all been ordered closed in Thailand.

At least for now, Phuket’s beaches remain open. That’s good news for Russian tourist Vitaliy Kurikov, who has been spending his days playing with his son on the white sands of Bang Tao beach.

“If they close the beaches, I really don’t know what to do,” he said.