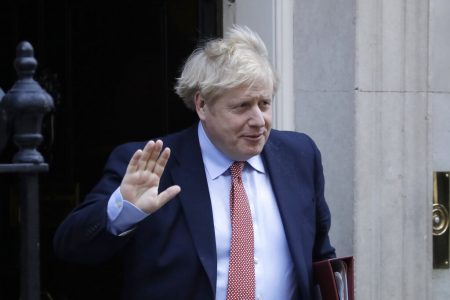 The Latest on the coronavirus pandemic. The new coronavirus causes mild or moderate symptoms for most people, but for some, especially older adults and people with existing health problems, it can cause more severe illness or death.

TOP OF THE HOUR:

Johnson’s office says he was tested after showing mild symptoms,

Downing St. says Johnson is self-isolating and continuing to lead the country’s response to COVID-19.

MOSCOW — The Kremlin says an official in Russia’s presidential administration has been diagnosed with the coronavirus.

Peskov confirmed Russian media reports that he was at a party attended by 78-year-old Lev Leshchenko, who later tested positive for the coronavirus. The presidential spokesman says during a conference call with reporters that he didn’t meet Leshchenko there.

The Russian government registered 196 new infections in the past day, bringing the country’s total to 1,036, with three deaths. In a bid to stem the outbreak, Putin declared the next week to be non-working for all Russian except those working in essential sectors.

The day-on-day increase of infections is slightly lower for the first time since a rapid rise in early March. The country has the second-highest tally in Europe and fourth in the world.

From Wednesday to Thursday, the positives had increased in more than 8,500 cases.

GENEVA — Swiss authorities are lighting up one of their most famed landmarks, the Matterhorn, to show solidarity in the fight against the coronavirus.

Local officials in the nearby town of Zermatt have authorized light artist Gerry Hofstetter to splash the Alpine peak each night with words and images of encouragement and inspiration.

Restaurants, bars, shops, ski lifts and tourist trains in Zermatt and across Switzerland have been closed as officials join an international effort to clamp down on the COVID-19 outbreak.

Images on the snow-capped summit have shown a heart, the Swiss flag, the words “Hope” and “#stayhome” and other messages.

The exhibition runs nightly from sundown to 11 p.m., weather permitting, and can be seen live on the www.zermatt.ch/hope site.

The shows are to run through April 19, the same target date for the end of the lockdown measures.

Switzerland as of Thursday morning had counted over 10,700 cases of coronavirus, with 161 deaths, putting Switzerland among the hardest-hit countries in Europe.

CAIRO — The World Health Organization representative in the East Mediterranean warned today of the repercussions of a potential spread of the novel coronavirus in the region’s war-torn countries.

“The emergence of the virus in much more vulnerable countries with fragile health systems in the Region, including Syria and Libya, is of special concern,” said WHO East Mediterranean Office Director Ahmed Al Mandhari.

On Wednesday, the count of infectious cases in Syria rose to five. A day earlier, Libya recorded its first confirmed COVID-19 case.

“A country like Syria, ravaged by conflict and displacement, and with a health system already pushed to its limits, will clearly be overburdened by an outbreak of COVID-19, and the impact could be catastrophic,” he added in a statement issued today.

SEOUL, South Korea — South Korea says it will block any passenger with even a mild fever from entering the country starting next week to counter a rise in coronavirus cases linked to arrivals from abroad.

Health Ministry official Koh Deuk-young today said all airlines flying to South Korea from Monday will be required to screen passengers for fevers and deny boarding anyone with a temperature higher than 37.5 degrees Celsius (99.5 degrees Fahrenheit).

Koh says airlines will refund tickets for those who are denied flights.

South Korea in past weeks has been scrambling to strengthen border controls, including enforcing two-week quarantines on South Korean nationals and foreigners with long-term stay visas arriving from the United States and Europe amid broadening outbreaks in the West.

PARIS — A 16-year-old French schoolgirl from the Essonne region has become the youngest person in the country to die from COVID-19.

The girl, called Julie and whose surname has not been revealed, was hospitalized Monday and died Tuesday evening at the Necker children’s hospital in Paris.

Her older sister, Manon, spoke to the French press to warn that “we must stop believing that this only affects the elderly. No one is invincible against this mutant virus.”

Manon said that Julie had no pre-existing illness before contracting coronavirus.

She recounted that Julie had a “slight cough” last week and when it worsened this weekend, they saw a doctor — from when the virus accelerated at a “violent” pace.

Even though the death rate from the virus among young people is low, France’s public health body has said that 35 percent of intensive care patients are under 60.

A 21-year-old woman died of the virus in Britain on Tuesday.

JAKARTA, Indonesia — Indonesia’s coronavirus cases surpassed 1,000 in the biggest one-day jump as the government ordered mass testing across the country to contain the disease’s spread.

Indonesia has planned to distribute about a half million tests kits across the archipelago nation, which is home for 270 million.

LONDON — Mike Ashley, the founder of the Sports Direct retail chain in the U.K., has apologized for a series of mistakes during the coronavirus outbreak.

Ashley, the majority owner of Frasers Group that also includes Evans Cycles among others, said in an open letter today he is “deeply apologetic about the misunderstandings of the last few days.”

Ashley has been criticized for his response to the pandemic. For example, he claimed that Sports Direct and Evans Cycles should stay open as they were essential for keeping the nation fit in the wake of Prime Minister Boris Johnson’s announcement on Monday that nonessential shops should close.

“In hindsight, our emails to the government were ill-judged and poorly timed,” he said. “On top of this, our communications to our employees and the public on this was poor.”

Ashley said he is offering the company’s “entire fleet of lorries” to the National Health Service to deliver medical supplies and equipment.

COPENHAGEN, Denmark — Police in southern Finland are preparing to enforce the new regulation aimed at ceasing all unnecessary human traffic to and from Uusimaa, the region that includes the Nordic nation’s capital, Helsinki.

Formal approval is pending for police to block access and exit from the region, which has been hit worst in the country by the coronavirus.

Social affairs minister Krista Kiuru said earlier this week that the decision was taken as the “risk of substantial spreading of the infection from the Uusimaa region to rest of Finland is high” through unnecessary traveling.

Nationwide, Finland has so far confirmed 958 coronavirus cases — the vast majority of them in Uusimaa — and five deaths. The exceptional move that is set to end April 19, affects the daily lives of some 1.7 million people, nearly a third of Finland’s population.

Correction Note: The above item has been corrected to say that a new regulation in southern Finland has not yet been enforced. The five-party government’s decision, made Wednesday, is pending formal approval from the Finnish Parliament.

The Russian government registered 196 new infections in the past 24 hours, bringing the country’s total to 1,036, and the third death. Forty-five people have recovered, officials said.

Russian authorities have ramped up testing this week after wide-spread criticism of insufficient screening.

Earlier this week Moscow Mayor Sergei Sobyanin, who leads a coronavirus task force, told President Vladimir Putin that Russia’s comparatively low caseload could reflect scare testing rather than the actual scale of the epidemic. As of Thursday, health officials conducted some 200,000 tests.

The official Xinhua News Agency said Xi delivered the message in a call to Trump this morning, in which he also urged the U.S. to “take substantive action in improving bilateral relations.”

Even before the virus outbreak, the U.S. and China were in the midst of a trade war and in sharpening conflicts over intellectual property, human rights, Taiwan and Beijing’s policies in Hong Kong and the South China Sea.

In the phone call, Xi “suggested that the two sides work together to boost cooperation in epidemic control and other fields, and develop a relationship of non-conflict, non-confrontation, mutual respect and win-win cooperation,” the official Xinhua News Agency reported.

The virus outbreak was first reported in China in December and now appears to have peaked in the country, even while the government remains on guard against imported cases.

Beijing has been particularly annoyed by U.S. Secretary of State Mike Pompeo’s repeated references to the outbreak as the “Wuhan Flu,” after the Chinese city where it was first detected, saying that politicizes the issue and promotes bias against China and Chinese Americans.

BUDAPEST, Hungary — Hungary’s prime minister says that restrictions will be enforced for two weeks on people leaving their homes.

Prime Minister Viktor Orban said today on state radio that from Saturday, only going to work, essential trips like to buy food or medicines or taking children to daycare will be allowed until April 11.

Shopping in food stores and pharmacies will be restricted to those over the age of 65 from 9 a.m. until noon.

People will also be allowed outside for exercising while keeping distance from each other and for some other necessary activities like attending physical therapy sessions.

Hungary has 300 cases of the coronavirus, and 10 infected people have died.

JOHANNESBURG — South Africa has announced its first two deaths from the coronavirus as the country’s cases rise above 1,000.

The health minister says in a statement that the deaths occurred in Western Cape province.

South Africa has the most cases in Africa and as of midnight entered a three-week lockdown. The military is in the streets helping to enforce measures that include bans on alcohol sales. Concerns are high about water supply in crowded, low-income townships.

ANKARA, Turkey — Turkish Airlines says it is temporarily suspending flights to New York, the hardest-hit area in the United States from the coronavirus outbreak.

Bilal Eksi, the Turkish national carrier’s chief, said on Twitter early today that flights to New York will be suspended starting from midnight until April 17.

The airline had halted most international flights amid the global pandemic and New York was one of the few destinations it was flying to.

JAKARTA, Indonesia — The largest textile market in Southeast Asia, Tanah Abang Market, temporarily closed as part of the measures to prevent the spread of COVID-19.

Arif Nasrudin, President Director of PD Pasar Jaya, as the city-owned market operator, said the market closed for 10 days starting from today through an agreement with traders.

The market temporarily stopped trading activities when the number of the visitors rose sharply one month before the month of Ramadan. These visitors are not only from Greater Jakarta areas, but from other regions in Indonesia and from other countries, such as Malaysia, and some other Asian, European and African countries.

Nasrudin said Tanah Abang Market recorded daily transactions up to 500 billion rupiah ($31,455). There are 13,000 traders that will stop their transaction as the market closes until April 5.

Tanah Abang is the first city-owned market to close amid the COVID-19 outbreak in Jakarta. Before that, five big shopping centers in Jakarta have also been temporarily closed until early April. They only open some stores that provide basic needs.

The Indonesian government announced Thursday there were 893 COVID-19 confirmed cases in the country. Jakarta is the province with the highest number of cases and the deaths. Jakarta Governor Anies Basewedan previously announced the closing of all entertainment places and tourist destinations in Indonesia’s capital.