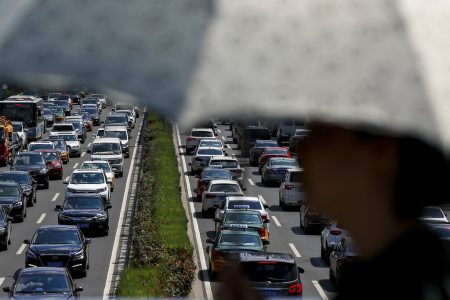 In this Aug. 13 file photo, a woman walks past vehicles on a city ring-road clogged with heavy traffic in Beijing. China’s economic growth slowed to a 26-year low in the latest quarter as a tariff war with Washington weighed on exports and auto sales and other domestic activity weakened. The world’s second-largest economy expanded by 6.2 percent in the three months ending in September, down from the previous quarter’s 6 percent, data showed today. ( (AP Photo/Andy Wong, File)

The 6 percent growth pace China reported for July-September was worse than most economists were expecting, highlighting a global economy that is slowing. Domestically, Beijing is under significant pressure to head off job losses as a trade war with the U.S. drags on.

Some of the latest data for September, such as investment and lending, showed improvement, but “pressure on economic activity should intensify in the coming months,” Julian Evans-Pritchard of Capital Economics said in a commentary.

“Cooling global demand will continue to weigh on exports, fiscal constraints mean that infrastructure spending will wane in the near-term and the recent boom in property construction looks set to unwind.”

It was the slowest growth rate since China began reporting quarterly data in 1993.

Britain’s FTSE 100 gained almost 0.2 percent to 7,194 as Prime Minister Boris Johnson worked to persuade lawmakers to accept a newly struck deal for the United Kingdom’s departure from the European Union. The vote is scheduled for Saturday.

Wall Street looked poised for a tepid start, with the future contracts for the Dow Jones Industrial Average and S&P 500 both trending toward flat to slightly higher opens.

Japan’s Nikkei 225 index advanced 0.2 percent to 22,492.68. Shares also rose in Jakarta but fell in the rest of Southeast Asia and in Taiwan.

Despite a choppy week of trading, the benchmark S&P 500 index appears on track for its second straight weekly gain.

The breakthrough in negotiations over Britain’s exit from the European Union also helped put traders in a buying mood.

In other trading, benchmark crude oil picked up 58 cents to $54.51 per barrel in electronic trading on the New York Mercantile Exchange. It rose 57 cents to settle at $53.93 a barrel on Thursday.