Fri. 9:15 a.m.: Johnson returns to London to drum up support for Brexit deal 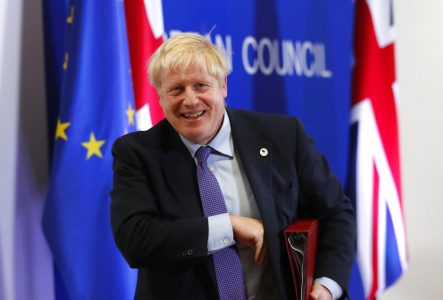 LONDON (AP) — After winning the backing of European Union leaders for his new Brexit deal , Prime Minister Boris Johnson was in London today looking to secure enough support to get the deal through the fractious British Parliament.

Johnson returned from an EU summit in Brussels overnight for a busy day attempting to persuade lawmakers to ratify the divorce deal at a rare Saturday sitting of Parliament.

He was due to brief his Cabinet this afternoon, ahead of what’s expected to be a knife-edge vote.

Johnson’s Conservative Party holds only 288 seats in the 650-seat House of Commons, so he will have to rely on support from other parties and independent lawmakers to get over the line.

“We’ve got a real opportunity now to get Brexit delivered faithful to the referendum, move on as a government, and I think as a country, and lift the clouds of Brexit,” he told the BBC.

Raab said the government has not given up hope of winning the support of its Northern Ireland ally, the Democratic Unionist Party, which has rejected the new deal.

But the chances of that appeared slim. The DUP’s Brexit spokesman, Sammy Wilson, said Johnson’s Brexit package — which carves out special status for Northern Ireland to keep an open border with EU member Ireland — is bad for his region and its bonds with the rest of the U.K.

“I can give you absolute assurance we will not be voting for this deal when it comes before the Commons tomorrow,” he told the BBC.

The deal’s fate could largely rest on a group of 21 Conservative lawmakers expelled from the party’s group in Parliament earlier this year for voting against the government, and on members from the main opposition Labour Party, which has 244 lawmakers.

Nicholas Soames, one of the 21, said he would vote for the deal, and thought most of his expelled colleagues would “by and large vote for it.”

Labour leaders have told party lawmakers to oppose the deal. But around 20 of them, mainly representing pro-Brexit parts of the country, have previously indicated a desire to back a deal to honor the June 2016 Brexit referendum result.

While a majority of members of Parliament supports leaving the EU, in keeping with voters’ decision in a referendum more than three years ago, they are split on the terms. Many want to rule out the possibility of crashing out of the bloc without a deal — a prospect economists say would disrupt trade and plunge the economy into recession.

It’s a complex situation and not even expert analysts can gauge the exact numbers.

“There seems to be an indication that it will be very, very close, it will come down to one, two or five people,” said Joelle Grogan, a senior lecturer in U.K. and EU law at Middlesex University. “But speaking only with 24 hours away, I have no idea what that will look like.”