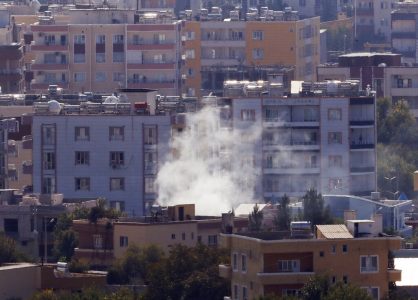 In this photo taken from the Turkish side of the border between Turkey and Syria, in Ceylanpinar, Sanliurfa province, southeastern Turkey, smoke billows from targets in Ras al-Ayn, Syria, on Friday, caused by shelling by Turkish forces. Fighting continued in a northeast Syrian border town at the center of the fight between Turkey and Kurdish forces early today, despite a U.S.-brokered cease-fire that went into effect overnight. Shelling and gunfire could be heard in and around Ras al-Ayn, as smoke billowed from locations near the border with Turkey and the Turkish town of Ceylanpinar. (AP Photo/Lefteris Pitarakis)

Recep Tayyip Erdogan told reporters in Istanbul today that his country’s defense minister confirmed that the Kurdish fighters had begun withdrawing. However, Erdogan says Turkish troops will remain in northeast Syria to monitor whether “this terror organization (is) truly leaving the area.”

But today, Associated Press journalists, activists and a Syria war monitor group have reported continued fighting around the northeast town of Ras al-Ayn, which is part of the cease-fire agreement.

The Rojava Information Center and the Britain-based Syrian Observatory for Human Rights reported fighting in villages on the western and eastern flanks of Ras al-Ayn. The Observatory says at least five people were killed and 14 injured. The Rojava Center said its activists on the ground reported advances by Turkey-backed forces on two villages.

Other activists reported a new exodus of civilians from the villages as fighting continued. A Kurdish fighter said there were attacks near the hospital in the center of Ras al-Ayn. He spoke on condition of anonymity because he was not authorized to brief reporters.

Erdogan however, denies that clashes were ongoing, saying: “I don’t know where you’re getting your news from. According to the news I received from my defense minister, there is no question of clashes. These are all speculation, disinformation.”

The Turkish leader said he would hold further talks on northeast Syria with Russian President Vladimir Putin next week.

He said: “With these discussions, God willing we will bring peace to the area.”