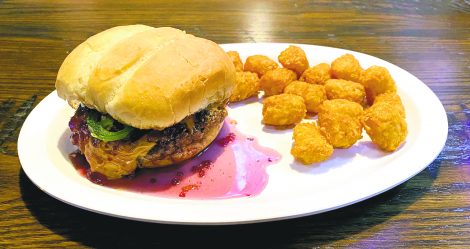 The toppings on the PBBJ include peanut butter, bacon grape jam and jalapenos.

AUSTINTOWN — Traveling through Austintown, you’ll find a number of great restaurants tempting you with fresh homemade dishes to enjoy. Among them, at the corner of Raccoon and New Road, is Sam’s Wedge Inn.

Sam’s has been a fixture in the Wedgewood neighborhood since 1967. When ownership changed hands in 2018, bringing the establishment into the 21st century was a priority. Sam’s Wedge Inn was given a full renovation, and if the restaurant’s new, modern look and feel is any indication of how tasty their burgers are, we were in for a treat.

From the burgers on the menu — including a build-your-own, which makes burger options nearly limitless — to the monthly contest which pits two burger creations (anyone can submit a recipe) against each other for bragging rights and a spot on the menu for the winner, Sam’s has a burger for all tastes.

With all that burger activity going on, you understand why we needed to make a trip and see what all the brouhaha was about at Sam’s Wedge Inn.

We entered hungry and ready to try these very creative burgers:

The two monthly battle burgers were:

• The J.M.K.M.B. — seasoned burger patty, crispy seasoned french fries, signature chili, cheddar jack cheese, diced red onion, fresh jalapeno, and an over-easy egg on a toasted kaiser bun. This burger was created when four bartenders, Jamie, Melissa, Kat and Miranda, came up with the idea to use the ingredients for a french fry appetizer while on spring break. So, the next progression was to put it on a burger.

Along the way, our server, Rachael DiFrancesco, helped guide us on our burger journey.

I went with the J.M.K.M.B. battle burger, and this burger had a little bit of everything. This burger was seasoned very well. The fresh onions and jalapeno stood out for me because I enjoy those flavors, and then you add in a little chili and this burger becomes a mini feast. The egg was cooked and broken perfect, with the yolk cascading down the burger.

I sure hope this burger wins its battle, and becomes a permanent fixture on the menu.

J.T., who chose the Swayze’s Smokehouse, remarked, “Had to. I’m a big fan of the movie ‘Roadhouse,’ and legend has it a guy working security here (named Dalton) submitted this one for the burger battle. Who am I to argue with Dalton?

“After the first bite, I knew this burger kicked (butt) the way Swayze’s character did in the movie. The peppered bacon and onion straws were delicious, but topping it with the spicy slaw… genius!”

Eric, who selected the PBBJ burger, said of his choice, “I had a slight idea of what to expect. Being a self-proclaimed peanut butter aficionado, I’ve sampled it on a few burgers in the past with positive outcomes.

“This, however, was a whole new experience. Pairing peanut butter with both bacon jam and jalapenos, my taste buds went into overload. Every bite was better than the last. As the peppers began to warm up my mouth, my old childhood friends PB and J were there to soothe the sensation.

“I implore everyone to not shy away from this burger just because it has some unconventional toppings. I’m certain that if you give it a chance, you’ll be as much of a fan as I am of this work of art.”

Chiz went with the second burger battle entree, the Spicy Honey Peanut Burger, and commented, “First off, all the meat quality was amazing. Whatever mix they use was fresh, melty, delightful and overall simply fantastic. It featured a seasoned 6-to-8-ounce burger patty, creamy peanut butter, pepper jack cheese, hot honey sauce, sweet-and-hot bacon strips, spicy cabbage and onion slaw all bundled together on a toasted kaiser bun. I tasted none of the onion for those who aren’t big onion fans.

“It truly was one of the most unique and enjoyable mixtures of flavor I have had on a burger in quite some time. More often times than not, peanut butter can dominate the flavor composition. But not today, folks. The spice from the pepper jack, hot honey sauce, and sweet-and-hot bacon strips hit my taste buds just right and reminded me almost of a sweet / spicy sauce that would be served with fried calamari. This could normally be overpowering, however, the saltiness in the bacon and burger mixed extremely well.

“In this burger, the peanut butter brought everything together in a mixture that would put a smile on any burger fan. It almost reminded me of a spicy-sweet Thai peanut dinner that you could find at an upscale establishment. I was simply floored by the deliciousness and all the flavors I got in each and every bite.

“It’s not often that something can taste so good and take me the whole meal to understand everything that I am tasting. As a burger connoisseur, this is one that will not be forgotten. I have tried many burgers with and without my BurgerGuyz over the years. This one easily lands in my top three most unique based on its complexity.

“If you have an advanced palate and are looking for a burger adventure you need to go this route, you will not be let down. If you like any or all of the above ingredients, try it anyway. This one’s a burger for the ages folks, a must-try in Chiz’ book. Thank you for everything, Nate! Your establishment was cozy and the service was top notch!”

When you’re heading down Raccoon Road in Austintown and you see the Sam’s Wedge Inn sign, stop in for a great tasting burger.