Volunteers gather warmth for the homeless 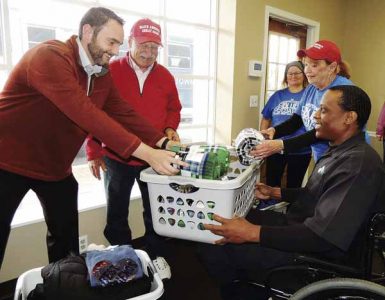 HUBBARD — “In America, Nobody Should Freeze To Death.”

That is both the motto and mission of the nonprofit Youngstown Blue Coats, founded in the fall of 2016. The Hubbard-based nonprofit’s focus is to prevent freezing and injury to the homeless and poor caused by exposure to inclement weather and extreme temperatures. The group puts an emphasis on military veterans.

“I started the Blue Coats after the need became larger than our brother group, Sub Zero Mission out of Painesville, Ohio, was able to handle,” Patty Summers, CEO and president, said.

“They came down here once or twice during the winter. At the end of the third season, their director suggested that I start my own nonprofit since they were unable to come that often and the need was growing.”

Youngstown Blue Coats volunteers travel to where there is need in Trumbull, Mahoning and Columbiana counties in Ohio and Lawrence, Mercer, Butler and Allegheny counties in Pennsylvania on their once-a-week bus trips.

“We distribute to the local missions and outreach organizations in the area and the veterans’ assistance groups,” Summers said.

“The Blue Coats are missionaries but are not a religious organization. We go, find and help people,” Summers said.

The charity provides such things as coats, sleeping bags, hats, scarves and boots to people lacking objects to keep warm in the winter.

“Wintertime is not a good time to be without warmth. Sadly, people are homeless for a variety of reasons. The least we can do is make sure that they have as many warming items as possible,” volunteer Pat Maiorca said. The Hubbard woman has volunteered with the Blue Coats since the group’s inception.

“I do a bit of everything. No one has a designated job. We all collect warming items at ‘Stuff the Bus’ events, count and sort all donated items, load the bus, unload the bus, visit veterans’ organizations and help distribute items at distribution points,” Maiorca said.

Hubbard resident Roseann Panning originally donated coats to a Stuff the Bus event. Then she joined.

“I have been on the team for a little over one year,” Panning said. “I talked to Patty Summers and I felt in my heart that I wanted to be part of the team, especially helping veterans since my husband is retired from the military.”

The group starts its collection of warming items in the fall and begins distribution on Dec. 1. Dependent on the weather, they continue their dissemination through the spring.

“When we go out on a mission, we always have a guide with us who knows the area and where folks might be. We head out with the guides and invite people back to our bus named the Alexander Luke, where we distribute the warming items. With guides we are able to reach many more people,” Summers said.

For the veterans, they offer additional assistance.

“We have special laminated cards that have safety information on one side and phone numbers that they can contact when they are ready on the other side,” she said.

In May 2018, Youngstown Blue Coats received a donation of a bus from Middlefield resident Matthew Mesarchik to help the nonprofit with their collection. Mesarchik asked the group for one thing when he gave it the donation.

“It was at the request of the gentleman who donated the bus that we name (it) Alexander Luke,” Summers said.

The USS Alexander J. Luke was a destroyer escort of the U.S. Navy. Its namesake was a Marine platoon sergeant who died in combat during a World War II attack against the Japanese forces in the Solomon Islands. One of his machine gunners was killed during a counterattack. Luke rushed to man the gun and was mortally wounded.

He received the Silver Star posthumously and the ship was christened with his name.

“Matthew Mesarchik said that this was the last ship that his grandfather served on,” Summers said.

Naming the bus after a veteran is pertinent to the group’s mission and also the population that it is assisting.

“Being an active member of this organization is bittersweet. It makes you feel wonderful to know you’re helping some folks who have nothing to keep them warm during our coldest winter days. When we see just how great the need is, especially among those who have served our country with such honor, it brings tears to my eyes to see and know some of our ‘finest’ don’t have the means to even take care of themselves. That should never happen in our great country,” Maiorca said.

Though the nonprofit focuses on the homeless and veterans, it wants everyone to have the opportunity to keep warm in inclement weather. In 2018, the group helped organizations that have people leaving rehabilitation or other situations where their clients do not have any items to keep them warm.

“We also say, ‘Americans helping Americans,’ because if they are in our country we consider them Americans and we never ask otherwise,” Summers said. 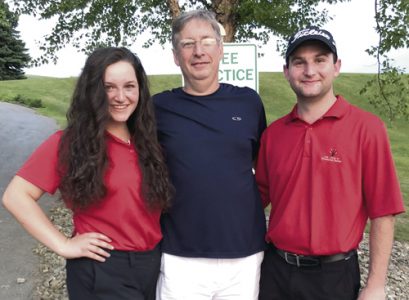