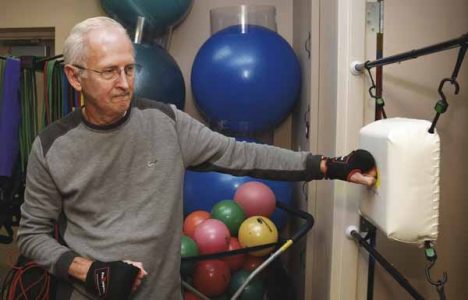 Ray Redmond of Warren punches a bag while working out during an exercise class designed for people with movement disorders such as Parkinson’s disease at St. Joe’s at the Mall. Classes meet at 11 a.m. Mondays, Wednesdays and Fridays. Staff photo / R. Michael Semple

NILES — After slipping on the gloves, Linda Bliven of Bazetta went a couple of rounds with a punching bag.

Boxing is one of the circuits in her thrice-weekly exercise class at St. Joe’s at the Mall designed for Parkinson’s disease patients.

“Medication only covers the symptoms. The exercise can actually slow down the progression of the disease,” Bliven said. “I honestly didn’t know how bad I felt until I felt better.”

Bliven, 71, was diagnosed with Parkinson’s about a year and a half ago. “They told me the best thing is exercise. It does help. I have more stamina. It’s good for my balance.”

The Parkinson’s exercise program started as an offshoot of a seniors exercise class at St. Joe’s at the Mall, Shirley Lisk, site manager, said. A woman in the exercise class asked if she could bring her husband, who had been diagnosed with Parkinson’s disease. She brought him and other people in his Parkinson’s support group, Lisk said.

St. Joe’s began a program specifically designed around Parkinson’s disease because “we saw the need in the community,” Lisk said. It is the only Parkinson’s exercise class in the area held three times per week, she said. Classes meet at 11 a.m. Mondays, Wednesdays and Fridays.

A year and a half ago, St. Joe’s at the Mall brought certified occupational therapy assistant Lisa Leek-Pisoni of Howland aboard.

“The No. 1 thing you can do to battle the symptoms of Parkinson’s is to exercise, especially cardiovascular,” Leek-Pisoni said. Exercise increases the amount of dopamine the body produces. The naturally occurring chemical is required for movement.

The exercises focus on big movements. Parkinson’s patients tend to move less and less, make smaller movements and shuffle instead of walk. Big movements combat that tendency, she said.

The group even encourages shouting since the voices of Parkinson’s patients tend to grow softer.

“The point is to go big. The exercises are large movements… We do big voices… We do a lot of breathing to expand lung capacity,” she said.

Sue Dagan, 70, a housewife from Mecca, said she began the program about a year ago, shortly after being diagnosed.

“I just couldn’t keep up in a regular aerobics class,” she said. “I’m definitely doing better with my balance. It’s been good for me.”

Plus, the Parkinson exercise class involves her with classmates who know firsthand the challenges she faces. It makes for great camaraderie, she said. “It’s easy to talk to someone with the same experiences as you do.”

While she exercises with the Parkinson group, her husband works out next door.

Joe Costello, 71, of Girard, a retired maintenance man, said he was diagnosed with Parkinson’s disease in 2014, but has only been part of the exercise class for the last six months.

“I heard about it. It’s pretty good,” Costello said. “It seems like I don’t fall as much.”

Leek-Pisoni started out in physical therapy, then became an exercise therapist before moving on to occupational therapy. Being certified in all three forms of therapy help her produce a balanced Parkinson’s workout, she said.

“We do different things on different days,” she said.

The class works out with dumbbells, exercise machines, stretches, ropes and a Theracycle therapy bicycle purchased by the St. Joe’s Warren Hospital Auxiliary and the MercyHealth Foundation. Some days, there are resistance exercises focused on building stability muscles; some days there are exercises done with a chair to focus on balance.

“The number one fear of Parkinson patients is falling,” Leek-Pisoni said.

One of the exercises has patients standing with their back to a wall, taking a resistance band in each hand and stretching it as far forward as possible. “The strengthening stretch builds up the stabilizer muscles and gets people prepared to to catch themselves when they start to fall,” she said.

Boxing is the best exercise for a person with Parkinson’s disease because it addresses so many of the needs, she said.

There’s a pattern to the movements, and it strengthens multiple muscle groups, and works on balance. Plus the impact of hitting something sends impulses to the brain that release natural chemicals that help with all of it. Plus, it helps release anger and frustration.

St. Joe’s at the Mall has a punching bag. There are Parkinson boxing programs at places like Hillside Rehabilitation Hospital, the Davis Family YMCA at St. Elizabeth Boardman Hospital and the Rock Steady Boxing program at VSN Fitness in Boardman, Lisk said.

“There are limited resources for people with Parkinson’s,” Lisk said. Finding an exercise class to fight against the progressive disease is essential, she said.