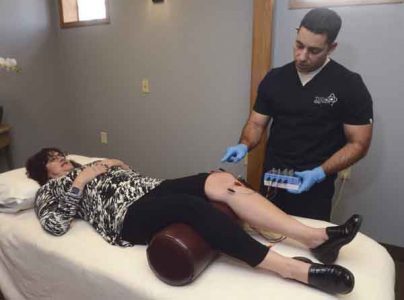 Physical therapist Vincent Ragozine slid another long, thin needle into Lori Clark’s knee. The needle inserted at the joint line where one bone meets another.

Lying on her back on the therapy table in the TuDor Physical Therapy office in Cornersburg, Clark said, “It’s really not painful. It feels like a little pinch when he puts the needle in.

“Right now I can’t feel it at all,” she said. “I couldn’t even tell you where they are right now.”

The pain relief procedure is called dry needling, a technique similar to acupuncture but with a different philosophy. It has gained large popularity in Trumbull and Mahoning counties over the last 10 years.

Based on traditional Chinese medicine, acupuncture seeks to balance one’s energy flow — chi — through pathways known as meridians in the body.

Originally, anesthesia was injected through hypodermic needles. Researchers discovered it was the needles, not the medication, that did the work. Eventually, doctors and therapists switched to the very thin acupuncture — or dry — needles.

After needles are inserted, an electrical stimulation unit is connected by alligator clips.

“The needles act like probes,” Ragozine, of Girard, said. “The electric current does the magic.”

The muscles twitch under the low current, sometimes making the needles appear to bounce. What’s happening is knotted muscle is being released, then the electrical stimulation clenches and unclenches the muscle hundreds of times to work out kinks and provide relief.

The vibrations are similar to using a TENS unit — transcutaneous electrical nerve stimulation — in which the doctor or therapist places sticky pads on the target area.

“Here, we run the electrical current through the muscle rather than on top of the muscle like the TENS does,” Ragozine said.

“Deep tissue massages can get the same results, but to get deep, it’s digging and it’s painful,” he said. “Some people like the pain. It’s pain to relieve a greater pain. (But) needles do it without that hard work.

“For knee arthritis, this is a great technological advance,” Ragozine said. The technique he used on Clark’s knee is called periosteal dry needling.

“We never had anything we could do for arthritis except exercise to strengthen the joint, or surgery. Now we have something that can address joint pain and inflammation immediately. You can walk out feeling better now.”

Clark described it as a vibrating sensation, sometimes a pinching sensation. “You can feel it but it’s nothing compared to the pain you have without it,” she said.

“It can be a really powerful technique for people that are in pain — back, pain, neck, hip …” Dr. Joseph Eschman of Eschman Physical Therapy in Howland said. “The great thing is there is no medication, so somebody can’t overdose.”

The needles produce a strong, physiological effect, he said. The body release of natural chemicals that are “thousands of times stronger than morphine. Also, needles stimulate an anti-inflammatory response,” Eschman said.

“It’s a very well-documented, scientific response,” he said. “I highly would recommend to do it before jumping into medications or surgery. I’ve been seeing tremendous results with it.”

He cautions that “a patient with chronic pain should have a different pain management program than someone with an acute injury. Dry needling is used in conjunction with other therapies and treatments based on individual cases, he said.

Eschman, who as trained in the dry needling technique in 2009, said, “Almost two years ago, I tore my rotator cuff. One of the things I would do is I would do my own dry needling of my own shoulder and get a fair amount of relief. That would give me two, three days of relief.

“Eventually, the pain went away. It was supplemented by traditional medicine, but I didn’t have to have surgery,” he said.

Ragozine, who became certified in dry needles in 2013 and was among the first physical therapists in the Mahoning Valley to practice dry needling, said, “We never had anything we could do for arthritis except exercise to strengthen the joint or surgery. Now, we have something that can address joint pain and inflammation immediately. You can walk out feeling better now.”

People sometimes get discouraged because physical therapy might take three to four weeks before you start to notice differences. Then they quit. Add dry needling into the exercise and massage programs and people are more likely to stick with the exercises, he said.

Plus, new research shows that repeated dry needling in an arthritic joint will stimulate the body to grow new cartilage. “I can’t speak for that,” Ragozine said, “but I’m seeing fantastic results.”

After 10 to 15 minutes of elctronic stimulation on Clark’s knee, Ragozine removed the needles and she rolled onto her stomach. It was time to insert needles into her low back on either side of the spine to address a sciatica issue. She is prone to tightness in her lower back and upper glutes.

“When he does it on my back, it feel like I’m twerking or something You’re moving but you’re not moving. It’s your muscles,” Clark said.

Clark, 55, of Canfield, retired after teaching 33 years in Youngstown. Now she’s back to teaching part time and tries to stay active. She said she’s been using dry needle therapy for about two years. During the course of going through physical therapy after surgery on her feet, she mentioned her back pain. Dry needling was suggested.

“I would go exercise and I wouldn’t be able to do anything for a week,” she said. Now she can work out, and while she will be sore, the pain wasn’t what it was before. She’s healing, she said. And she’s a believer in dry needling.