Social media use rises while sleep falls to side

Most teens probably wouldn’t see that as a problem.

Most parents probably would.

This is because those same teens also report getting a lot less sleep than their peers.

To be fair, the average time spent on social media among most teens was one to three hours hours per day, according to a new report published in BMJ Open. More than a third of the teens in this study reported using social media less than an hour each day.

The study, based in the UK, included more than 11,000 teens. We know from previous studies there are very few differences between the social media behaviors of teens in the U.S. and England.

The research team led by Holly Scott at the University of Glasgow noted a clear link between heavy social media use and sleep patterns. Teens in the high social media use category simply aren’t getting enough good, deep (i.e., healthy) sleep.

Scott’s team asked teens to report the duration and quality of their sleep. This meant looking at the time teens reported going to sleep and when they woke on school days and free days.

They also asked teens about the time it took for them to fall asleep and the amount of trouble they had falling back to sleep after waking in the middle of the night.

Teens who reported heavy social media use fell asleep much later, took longer to fall asleep, and woke later in the morning than their peers. They also had much more trouble falling back to sleep after waking in the night.

There’s a problem here, of course. The researchers couldn’t directly observe the sleep patterns of 11,000 teens. That would’ve taken too long. So they relied on self-reported data.

The problem is relying on teens to be honest and accurate about how much time they’re spending on social media as well as their sleep patterns. But it was really the only way to get the data needed for this study.

However, as parents, there’s something we can do about this.

We should be the sleep educators. We need to tell our kids when to unplug and when to begin the process of unwinding much earlier in the evening.

Make it a family practice to unplug and unwind earlier in the evening.

As parents and caregivers, if the glow of the smartphone is the last thing we see before closing our eyes, our sleep patterns probably aren’t much better than the teens in this study.

Dr. Adam Earnheardt is chair of the department of communication at Youngstown State University. Follow him on Twitter at @adamearn and on his blog at www.adamearn.com.

Tech helps find time to be a good father

There’s not enough time. Time to work. Time to exercise. Time to reconnect with my wife. Time to think about ... 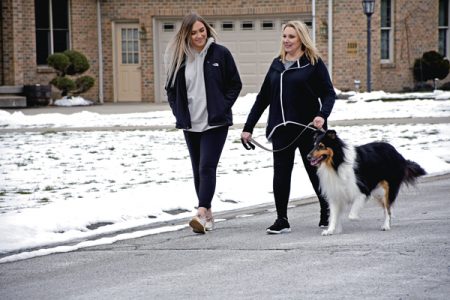 WINTER SOCIAL FOR SENIORS: Community leaders from across the Mahoning Valley are tackling the problem of loneliness ...