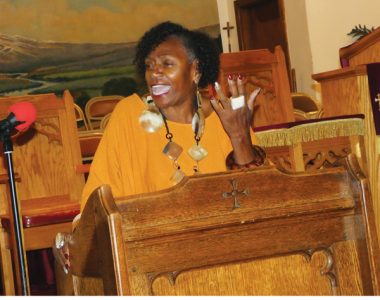 Lynnette Miller, Community Leadership Coalition on Education, encourages people to attend the Supreme Court hearing on Wednesday morning when the Youngstown School Board case against HB 70 will be discussed.

YOUNGSTOWN — Critics of the law that could spell the end of the city’s elected school board by the end of the year are hoping to send a busload of people to hear arguments before the Ohio Supreme Court on Wednesday morning.

Calling House Bill 70 undemocratic, union busting, and against the interest of Youngstown school children’s education, the Rev. Kenneth Simon, pastor of New Bethel Baptist Church and a founder of the Community Leadership Coalition, said there has been no improvement in city schools since the academic distress commission was formed 10 years ago.

Simon emphasized any failure experienced by the district in the last several years has been the responsibility of the state, because the city’s elected school board did not have control since HB 70 ordered a CEO to be in place.

“That was intentional,” Simon argued. “They are looking to eliminate an elected board that had no authority with an appointed five-member board that will not have any authority.”

Simon said the creators of HB 70 are trying to make it appear that Youngstown Mayor Tito Brown will appoint the five-member board, but the 10 candidates from which he will choose will be appointed by a state superintendent-approved panel.

“You might as well be real and have the state superintendent select the board members,” Simon said.

Criticizing the district’s CEO position, board President Brenda Kimble said whoever fills that position is not necessarily looking out for the best interests of the district’s teachers or its students, but for the state, which is his or her employer.

“He (the CEO) is being paid a handsome salary by the state,” Kimble said.

Kimble argued the goal of some who helped pass HB 70 was to eliminate public schools in Youngstown and replace them with a charter school system.

A current school board member and a candidate for re-election, Kimble admitted she is running for a seat that she may not be able to fill unless HB 70 is eliminated.

“We need you to be at the Supreme Court hearing with us on Wednesday,” Kimble said. “This is the most important trip we will take. They need to see our faces and our support for this lawsuit.

The bus traveling to the Supreme Court hearing at a school in Montpelier, Ohio, will be leaving 4:30 a.m. Wednesday from New Bethel Baptist Church at 1507 Hillman St.

Lynnette Miller, a retired teacher and a member of the CLCE, argued that public education is important because it opens the doors for every student — regardless of race, income or any handicap.

“What we need you to do is to call and send messages to your state senators, members of the Ohio Senate’s education committee members , as well as state Sen. President Larry Obhof and Gov. Mike DeWine,” Miller said.

Miller emphasized that those who want to eliminate academic distress commissions need to be tenacious in their efforts to make sure members of the Senate understand there is significant support for eliminating HB 70.

“You should encourage your family members and friends to do the same,” Miller told the crowd of more than 100 people who filled the church’s sancturary.

Rep. Joe Miller, D-Lorain, one of the co-authors of HB 154, said HB 70 compares poorer, more urban districts to wealthier districts that do not have the same kind of issues. Miller argued the writers of HB 70 are using districts such as Youngstown, Lorain and East Cleveland — thre three Ohio districts still defined as under academic distress — as social experiments.

Miller said he will continue to fight for collective bargaining rights for teachers and other educators, as well as making sure the three districts still supervised by state commissions are allowed out of them,.

“HB 70 is an attack on teachers and an attack on local communities, like Youngstown, to be represented by a school board elected by local residents,” Miller said.