Penguin women drop back & forth battle

YOUNGSTOWN — The Youngstown State women’s basketball team led by as many as 11 points in the first half, but was able to hold on as they fell to Northern Kentucky, 59-55, Saturday afternoon at the Beeghly Center.

Junior Chelsea Olson led the Penguins with a game-high 20 points, with 11 coming in the first quarter. Ny’Dajah Jackson came off the bench to score 10 points.

Midway through the second quarter the Penguins were shooting 11-of-14 from the field, but their shooting percentage dropped, shooting 10-of-33 throughout the remainder of the game.

YSU held a two-point lead at the half which was eclipsed by NKU early in the third quarter.

The game turned into back-and-forth runs as the Penguins scored six of the next nine points to re-tie the game at 41. YSU retook the lead after an Olson 3-pointer.

The teams continued to trade points and the Penguins took their final lead of the afternoon, leading 48-47 with nine minutes left in the game,

NKU went on another run to take the lead for good.

Garrettsville Garfield alumna Grayson Rose saw the court for seven minutes for the Norse where she scored two points.

The Youngstown State bowling team went 2-1 in best-of-seven bracket play on Sunday and finished the Mid-Winter ... 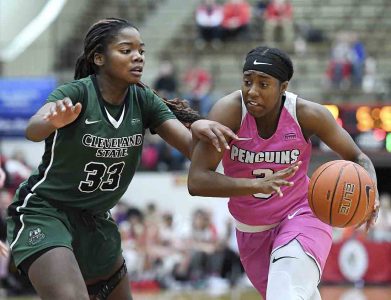