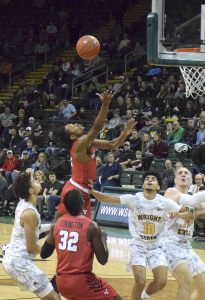 FAIRBORN — Darius Quisenberry came out of the first 20 minutes dejected.

The Springfield native was 1-of-8 from the floor for two points. Youngstown State University men’s basketball assistant coach Jason Slay put his arm around the sophomore point guard and started talking as they headed to the locker room during Saturday’s 79-72 loss at the Nutter Center.

These Penguins kept fighting, down 37-34 at the half. Senior Donel Cathcart had 15 points at the break and finished with a career-high 21. He and Naz Bohannon kept trying to supplement the offense. The two combined for 24 at the half and Bohannon finished with 17 points and eight rebounds.

“They do a great job on Darius,” said YSU coach Jerrod Calhoun, whose team has lost two straight and drops to 11-9, 4-3 Horizon League. “He draws a lot of attention. Some of your other guys have to step up. Naz and Zoomi (Cathcart) were really, really good.”

Quisenberry’s two free throws tied the game at 47 with about 15 minutes remaining.

He made one free throw with less than 4 minutes left to make it a 71-66 Wright State lead. Quisenberry, who rallied for 19 points, airballed the second free throw.

The chants of airball came from the boisterous Wright State student section behind the basket. The YSU sophomore guard graduated from nearby Huber Heights Wayne. Boos rained down on him as he touched ball. It was similar to the high school atmosphere in a rival gym.

“My definition of pressure is a lot different that other people, growing up, watching my dad work two, three jobs — trying to provide for five kids and getting diagnosed with (prostate) cancer and still wonder if he’s going to be here the next day,” Quisenberry said. “My pressure is different. I’ve seen real-life pressure. Playing the game I love is not pressure to me. It’s fun.

“To play, get in front of them, it’s exciting.”

For league leader Wright State (17-4, 7-1), it was the usual suspects of Loudon Love, Cole Gentry and Bill Wampler who scored in double figures.

Love had a key block off of a putback by YSU’s Garrett Covington, who couldn’t get over the massive 6-foot-8, 260-pound center with about a minute remaining. Love lost about 20 pounds since he’s entered the Raiders program.

“He’s the best player in the league,” said Calhoun of Love, who had 21 points and nine rebounds (six offensive). “He’s done a tremendous job with his body. He moves better. He’s a load. He really makes the game easier for others because he draws so much attention.”

YSU 6-8, 265-pound junior center Jamir Thomas did the best he could for the Penguins, putting a body on the forceful Wright State post with 12 rebounds. Wright State’s 6-9, 225-pound freshman post Grant Basile was held to six points and three rebounds. He had a double-double in Thursday’s win against Cleveland State.

Meanwhile, Gentry made a 3-pointer with 48 seconds left to put the Raiders up eight 76-68 as fans started heading for the exits. They’ve seen the narrative before. Wampler added 16 points, while Gentry put in 11. Tanner Holden added eight points and 13 rebounds.

“I will not miss Cole Gentry or Billy Wampler when they graduate,” Calhoun said of the Wright State seniors. “They’ve been a thorn in our side. They make big plays, timely plays. That was the difference.”

So were three facts on the final box score. Wright State shot 30 free throws to YSU’s 18. The Raiders had 11 points off of YSU’s 11 turnovers. The Penguins allowed 15 Wright State offensive boards.

“If we take care of those things, it’s a different result,” Calhoun said.

The Penguins start a five-game homestand Thursday against Milwaukee, starting at 7 p.m. YSU is 8-0 at the Beeghly Center.

“The thing I’ve challenged our guys is we’ve got to get the students inside,” Calhoun said. “We’ve created an unbelievable atmosphere at the Beeghly Center as far as protecting home turf.”

It was a much different game for YSU, which was blown out by 25 Thursday at Northern Kentucky.

It was a better performance than Thursday, Calhoun said. 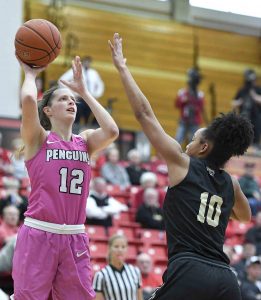