YOUNGSTOWN — Not long after Doug Phillips took over as the Youngstown State University football coach in February, he noticed someone during the first few weeks of drills.

His name was Antoine Cook.

The junior defensive tackle was showing the kind of relentless approach to training that Phillips believes is the key to building a winning team.

“He jumped out right when we first got here, with his personality and his work ethic in the drills,” Phillips said. “He’s one I try to touch base with weekly because he’s one of those returning players that I think can be a very big player for us up front.”

Cook apparently thinks so, too.

The role will be a different one for Cook, in a couple of ways. He was overshadowed last year by standout defensive ends Justus Reed and Ma’lik Richmond, as well as fellow tackle DeMarko Craig, who had a breakout freshman year.

Cook simply did his job, quietly and confidently. He finished with good numbers — 39 tackles, 6.5 tackles for loss and four sacks — and was a consistent force as part of the strongest area of the team. He just didn’t stick out; at least not like he did to Phillips.

That could change in 2020. Reed transferred to Virginia Tech and Richmond was out of eligibility, leaving the 6-foot-4, 260-pound Cook as the elder statesman up front and one of the leaders of the defense.

It’s a new look for Cook.

“I want to compete and really push them past their limits,” said Cook of helping some of the younger linemen develop. “I want to lead by example, but to be honest, this is my first time becoming a true leader. So I need to make sure I’m holding myself accountable first, to lead by example and get my guys to follow and notice, ‘OK, this is what it’s going to take.’

“Because, at the end of the day, they’re going to look at the older guys, but no one’s going to want to listen to an older guy that’s not doing what they need to do.”

Cook may be doing his leading from a new position.

With both starting defensive ends gone, Phillips said Cook could move from tackle to defensive end. The inability to conduct spring practices because of the COVID-19 pandemic took away Phillips’ chance to assess personnel, so he isn’t ready to pick a position or Cook just yet.

Either way, the hard-working McKeesport, Pa., native is going to be somewhere in the trenches.

“When we get to camp, we can evaluate those first two weeks in finding out what we have on the edges, and we’ll adjust there with Antoine,” Phillips said. “Fortunately, he’s listening to that and is able to adjust to where we need him to play. We’re not going to tell him to drop a lot of weight, but we’ll know more when we get to camp. That’s the hardest thing — when you don’t have spring ball, and you haven’t had a chance to really get to coach these guys. We’re going to have to be great evaluators those first 10 days of practice.”

The only issue with waiting before deciding a position is that Cook would like to be bigger and stronger if he’s going to be at tackle and a bit lighter and quicker if he’s an end.

Cook said he’s simply staying around the same weight, for now, and training as hard as he can. He is currently in Pennsylvania, staying with family during the summer, training with his old high school coach and on his own.

“I’ve been working on my speed, just because there’s a possibility of me playing end this season,” Cook said. “I’m just watching what I eat a little more, working on cutting just a little bit of weight. Not too much. For myself, not only for the position, I always wanted to get faster. At the end of the day, I’m just doing whatever helps the team win.”

Cook was rather enthusiastic when describing his determination to become a key player, but he became more focused and appreciative when discussing the team and coaches.

He said much of his passion stems from the new coaching staff. He said they have made a conscious effort to get to know the players from a personal level more so than from a football standpoint. It’s an approach that has built respect within the team.

“The staff’s doing a really great job of getting us comfortable with them,” Cook said. “… The way they approached this thing of building relationships with us and the energy they bring, their standards just show that these dudes actually care. Not only do they want to win, but they also want to help us become winners (as people).

“I’m comfortable with these guys. The way they’re coaching us just through this pandemic really shows that they really care.”

Cook has returned the favor so far.

16U DuraEdge 4, Avalanche 0 – Caleb Jones had two hits, including one double, and scored once, Braden Gebhardt ... 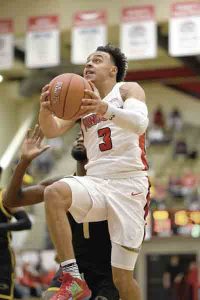