YSU anglers reel in success with berths at nationals

During that time the group has become one of the most successful club sports at the university, enjoying modest success statewide, regionally and at the national level.

When the College Fishing National Championships take place at Harris Chain of Lakes from Feb. 26-28 in Leesburg, Florida, three two-man teams representing YSU will be among the 100 teams vying for the title.

“I’ve been fishing with my grandfather and father since I can remember, and a member of the club a little over two years. This is definitely an exciting time for all of us,” club president Cody Allen told the Curbstone Coaches when he addressed Monday’s weekly meeting at Avion Banquet Center. “Teams from California to Michigan, Ohio to Texas and all states in between will be competing and we’re anxious to see how we stack up against some of the very best in the nation.”

In order to qualify, teams compete in three regular-season qualifying tournaments in one of five conferences — Central, Northern, Southern, Southeastern and Western — and all participants must be registered, full-time students at a college, university or community college.

“All teams will fish the first two days with the top 10 finalists set to compete for the championship on the 28th,” Allen said. “It’s a tough competition because there are so many excellent anglers, so we’re anxious to see where we stack up against some of the very best nationally. We have three excellent teams representing YSU and the goal is to win it all. We cannot wait for the competition to get started.”

Comprising the three Penguins teams will be Jared Latone and John Creed, Jeff Jardine and Mike Soots, and Brandon Freer and Allen.

“In order to get to the finals, teams have to have the largest five-fish bag by weight,” Allen said. “On the final day, what you catch is added to your first two days in order to determine the champion.”

Last year, one YSU team was represented, and while they fished the first two days, they did not qualify for finals.

“This is exciting for all of us because it’s so tough to qualify. Yet here we are sending three groups to the nationals,” Allen said. “We’ve never competed at Harris Chain of Lakes so we plan on departing Feb. 19, take a couple days to get there, and then make sure our boats are ready to go. We have three practice days to get acclimated to the waters so we’re all pumped, excited and ready to go.”

The nationals will be the last event as collegiate anglers for Allen, Jardine, Latone and Creed, all of whom are seniors.

Allen, a Maplewood High School product, will graduate this spring with his BA in accounting. He plans on pursuing his MA in accounting upon graduation, also at YSU.

With four anglers set to graduate, Allen’s hope is for the club to grow and not fall by the wayside.

“We’re losing several members due to graduation so we need to build our club’s membership,” Allen said. “Any current YSU student or prospective YSU student currently in high school is eligible for membership. Also, funding is a necessity so we are always looking for help in that area.”

Further information about the club and funding support can be obtained by contacting Allen at 330-980-3952, or via e-mail at cmallen03@student.ysu.edu.

The competition will be streamed on Facebook by accessing FLW.

GOODYEAR, Arizona — Indians reliever Emmanuel Clase could be sidelined three months with a strained back muscle, ... 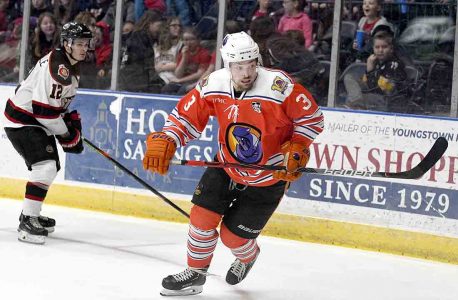 History expert to talk at library