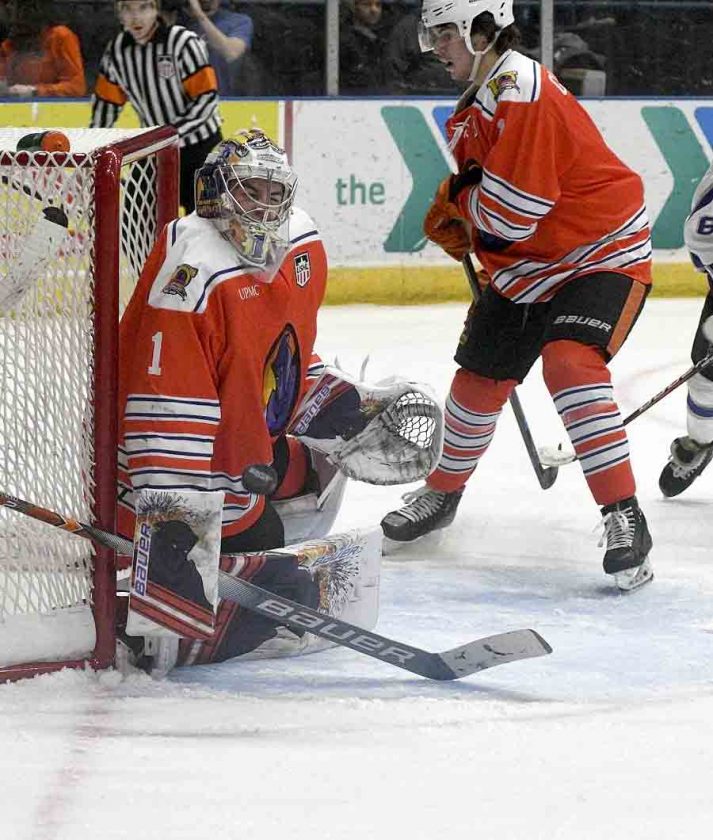 YOUNGSTOWN — With the score tied 1-1 after the first period Friday night, it looked like there would be a battle between the Youngstown Phantoms and Tri-City Storm.

But that battle turned out to be one-sided, as the Storm poured in three unanswered goals and claimed the first game of the series, 4-1.

“Definitely not pleased,” Phantoms coach Brad Patterson said. “I thought that not only was our execution not very good tonight, but I thought our compete level was poor to say the least.”

Tri-City struck first with Mitchell Miller beating goaltender Colin Purcell just a minute and a half into the game.

Later in the period, the Phantoms got on the board with Jason Dobay firing a shot from beyond the faceoff circle to knot the game at 1 apiece. 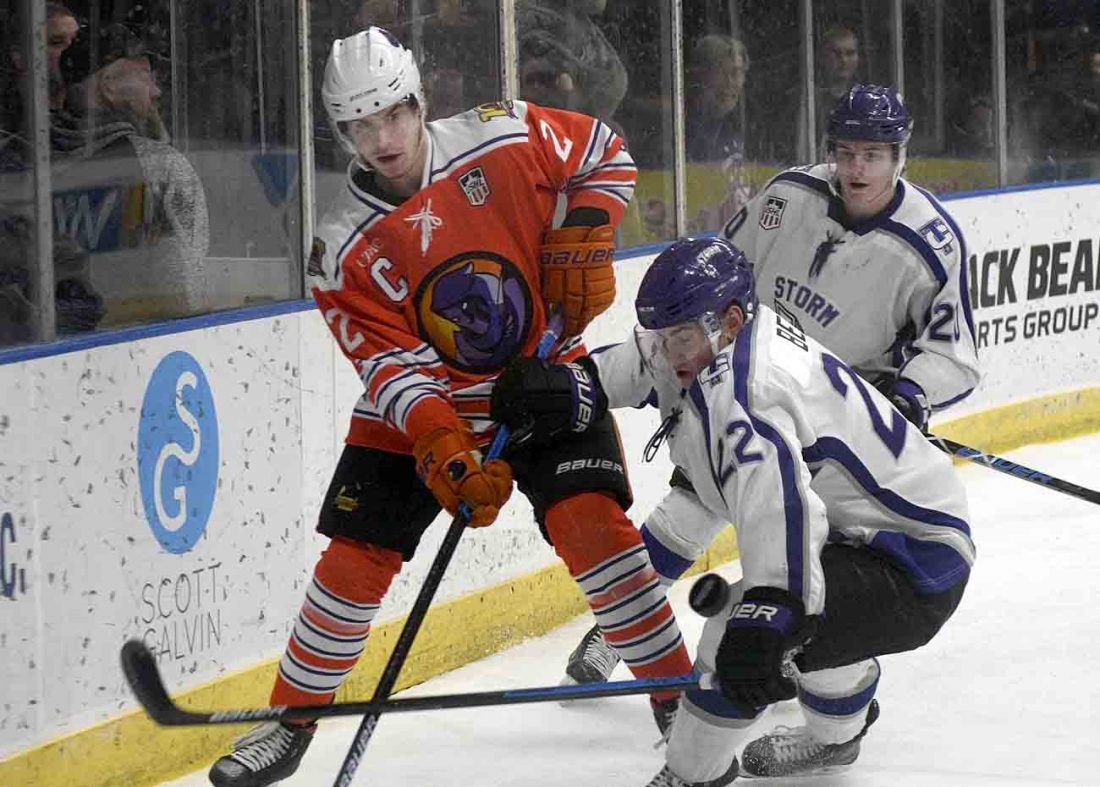 Staff photo / Brian Yauger Newly-appointed captain of the Phantoms Aiden Gallacher (2) clears the puck past the defense of Tri-City wingers Joe Berg, front, and Mark Estapa on Friday night at the Covelli Centre.

From that point on, the Storm took control of the game.

With three minutes remaining in the second period, Tri-City retook the lead. Colby Ambrosio beat Purcell to make the game a 2-1 affair. Two minutes later Miller scored his second of the night to extend that lead.

Finally, with six minutes left in the game, Tri-City forward Joe Berg scored the game-sealing goal to make it 4-1.

In the third period there was a rough collision between Phantoms forward Reilly Funk and a Tri-City player. The two were down on the ice for a few minutes. Funk was eventually escorted to the locker room. His condition was still unknown immediately after the game.

When that hit was made, it seemed like all the energy in the building had instantly been sucked out. According to Patterson, the team’s energy was slim to begin with.

“I thought consistently all game you build energy. It’s no different then when you talk about special teams building momentum for you,” Patterson said. “It was the little things that kept adding up. From a momentum standpoint, there wasn’t any momentum that we had.”

“Compete level” is a phrase used by Patterson quite a bit and a lack of it Friday was his biggest issue.

“That’s a good club across from us,” Patterson said. “But, at the end of the day, we shot ourselves in the foot a lot. I thought we were out-competed on pucks … I thought we didn’t move our feet with the puck in transition. If you do that, you’re going to watch and we did that.”

Yusaku Ando returned to the lineup after spending time with Team Japan in the IIHF U20 Division II Group A Championship in Lithuania. Team Japan won all five of its games by a combined score of 37-7.

Ando played a key role in the team’s gold-winning effort, scoring three goals and five assists. Patterson is glad to have him back.

“I think his minutes were down compared to what he usually plays for us, but if you look at his last month, he’s had a lot of travel, a lot of work, not here, but in other places,” Patterson said. “It’s good to have him back. We’re looking forward to getting him fully up to speed.”

Out of the lineup however, was Phantoms’ leading scorer Trevor Kuntar. Kuntar had to serve a one-game suspension for an incident that happened after the Jan. 11 game against the US National Team Development Program.

Kuntar (1.33 points-per-game) is approaching a franchise-high in points-per-game in a season. He is trailing now-Winnipeg Jets forward Kyle Connor by .10 points.

His scoring touch will be a much-needed jolt to the Phantoms’ offense as they host Tri-City again tonight at 7:05.

WASHINGTON — Facing another deficit and the prospect of their losing streak dragging on, Capitals players ...

COLUMBUS — Ohio State coach Chris Holtmann sat across from Luther Muhammad at a recent lunch and told him there ...