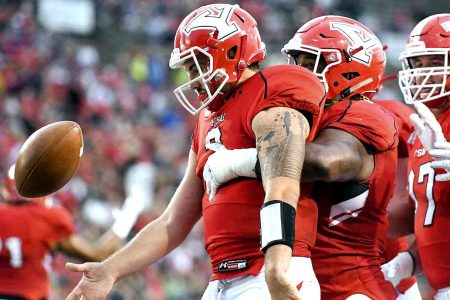 YOUNGSTOWN — It would seem obvious that the Youngstown State football team is confident heading into its Missouri Valley Football Conference opener.

The Penguins are 4-0 and have won every game by at least 20 points. They are now ranked as high as No. 17 in the country, and the balance between a powerful offense and a opportunistic defense has worked beautifully through four games.

Yet, that’s not what has YSU brimming with confidence as it heads to Cedar Falls, Iowa, to take on 13th-ranked Northern Iowa (2-2).

“We’re pretty confident,” YSU offensive lineman Jacob Zinni said. “That confidence builds through the week though, too, in our preparation. You don’t go out and just play the game on Saturday confidently because you had a decent week of practice. You go out and play confident because you had an excellent week of practice, and you prepared very well in film study and things of nature that will help you play well.”

The Penguins are relying on preparation and team unity instead of simply banking on talent and schemes.

That’s exactly what coach Bo Pelini wants to hear. The fifth-year coach believes this team has bought in to what he and the coaching staff are preaching, and the results are evident. Players are in the right areas on the field, making the right reads, executing the calls and making plays.

Pelini said it’s all part of the process that’s in place, and right now the Penguins are following it with precision. What he likes even more is that no one is satisfied.

“I like the way we have prepared,” Pelini said. “I can count maybe one or two times where I felt like we didn’t come out with energy and didn’t practice well. We’ve got to continue to improve. We’re pretty realistic with our guys, and they don’t get too (excited). Believe me, everybody enjoys winning football games, but we’re pretty black and white when we watch the film, showing them the areas that we need to improve in. They just keep working to turn over every stone to try and get better, each and every guy.”

The Penguins’ positive mindset could be tested by what they see as a “hungry” UNI team.

The Panthers have two losses, a 29-26 defeat to Iowa State in the season opener and a 29-17 setback to fifth-ranked Weber State last week. UNI has always been tough at home though.

YSU hasn’t won in the UNI-Dome since 1999, and the Panthers hold a 22-9 advantage in the all-time series between the two. Still, the 2019 version of YSU isn’t concerning itself with what happened in the past.

One thing he is paying attention to is the health of center Matt Jones.

The senior graduate student who transferred from West Virginia — where he was a two-year starter — exited last weekend’s win over Robert Morris in the second half with an ankle injury and did not return.

Jones, a Hubbard High School graduate, started the first four games at center and has been a big part of one of the nation’s top rushing attacks. The Penguins have also allowed just two sacks (best in the conference).

Pelini is hopeful Jones will be able to go Saturday.

“He’s doing a lot better,” Pelini said. “His ankle wasn’t blown up. We’ll see how the week goes, but I would say he’s probable.”

YSU could use him against a stout UNI defense.

Zinni said it’s probably the best defensive line he has seen on film this year. The secondary has allowed just four passing TDs, an impressive mark considering the level of competition they have faced.

The offense is led by quarterback Will McElvain, a dual-threat QB who has tossed seven TDs and just one interception. Just a freshman, McElvain has a solid group of receivers surrounding him and the friendly confines of the UNI-Dome, one of the hardest places to play in the FCS.

The Penguins understand they need to play their best to win the opener in what is widely regarded as the toughest conference in the FCS.

“We’re hitting the road for the first time in over a month, so that’ll be a challenge in itself,” Zinni said. “… They’re probably pretty hungry coming off a loss. It’s homecoming for them. It’s going to be a tough environment, but it’s going to be about the guys in the red helmets at the end of the day. I know I keep saying it, but it’s true. That’s what we’ve done to this point, and I hope if we continue to do that, it’ll take us to where we want to go.”

New Browns coach Kevin Stefanski could be reuniting with an old friend in Cleveland. The team is interviewing ...

Bill Davis spent the 1980s as an NFL executive with the Miami Dolphins, Cleveland Browns and Philadelphia ...

COLUMBUS — Kerry Coombs is returning to the Ohio State coaching staff, this time as defensive ...

CLEVELAND — Odell Beckham Jr. is expected to make a full recovery following surgery on a core muscle injury that ...