Niles grad Rasile back in Valley with YSU 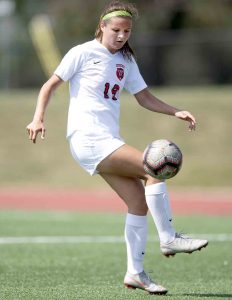 Correspondent photo / Robert Hayes Bethany Rasile, who played in high school at Niles, has returned to the Mahoning Valley with the Youngstown State soccer program after spending a season at the University of Pittsburgh.

YOUNGSTOWN — Sometimes a change in scenery can make a huge difference.

Bethany Rasile, a graduate of Niles McKinley High School, played at the University of Pittsburgh last fall, but saw limited playing time and decided she would change course in her collegiate career.

She ended up leaving Pitt, and transferred home to Youngstown State University where she has found a role on the soccer pitch.

“I was excited to come home, be close to my family,” Rasile said. “I was excited to play for coach (Brian) Shrum. It’s an up-and-coming program, he’s really turning things around, so it’s exciting to be a part of it.”

As it turned out, Shrum and his coaching staff have had their eye on Rasile for awhile.

“Unfortunately, the scenario at Pitt hadn’t unfolded yet so she still had an opportunity. So she went there and, yeah, I guess it didn’t work out for her. So after she came available on the transfer market, she reached out to us and by all means I was already interested as it was. So it was a good fit for both of us.”

Shrum is in his second year at YSU and he’s working to build a program that has yet to see a winning season since its inception in 1996.

YSU has already doubled its win total compared to last season with a record of 2-7-1 up to this point.

This year, the Penguins have 13 new players on their roster, but Rasile has seen consistent playing time, seeing action in all 10 of YSU’s matches to this point. She has started in all but one of those matches.

“Her athleticism first, in this conference, I think is something that she can utilize. She’s a quick defender, she’s a hard working kid, she’s great in the classroom, she’s a great teammate, she’s very coachable,” Shrum said. “So I mean, everything that you can want out of an athlete she gives you.

“And then obviously, she’s learning to play within the way we want to play, so of course every kid is. It’s a slow-moving boulder, I like to say right now. But she’s adapting well and she’s getting a lot of minutes for us, so it’s a good thing.”

Rasile was able to transfer into YSU in the spring and was able to participate in scrimmages against other colleges during the spring schedule. That’s something she said was important for her.

Although she’s from McDonald, Rasile transferred into Niles going into her freshman year of high school. For her, playing at Niles helped prepare her for the future.

“I loved playing at Niles, I was surrounded by some of my best friends that I also played club soccer with. It was a really good experience.

“I felt pretty prepared coming into college, so it was good,” she said.

Rasile has seen playing time at the outside back and center back positions during the 2019 season. Shrum said he thinks she has done well adjusting to a new team.

“That is difficult, I think she embraces it though, because it’s an opportunity to show what she can do. And then she’s versatile, so she can play in multiple roles.

“I think she’s become accustomed easier because she’s familiar with the area, she knows people, she knows a lot of the people around here,” Shrum said. “So I think that’s helping with her comfort level.”

She enjoys being a student of the game.

“It’s a little bit difficult, because at this level you have to know the positioning and everything, but I just do my best to pay attention and be ready to go whenever (Shrum) needs me at a different position,” Rasile said.

At the end of the day, Rasile has her eyes set on one objective.

“We want to make the conference tournament, I think that’s our biggest goal.”

NEW YORK — Bartolo Colon refuses to entertain the idea of retirement. It doesn’t matter that he didn’t pitch ...