Get your northern pike experience close to home

You can spend big bucks on a dream trip to a North Woods wilderness lodge where northern pike prowl the cold waters. Or you might just drive up to Bazetta and Mecca townships and work the weedy waters of Mosquito Lake.

Northern pike have been slashing and crashing anglers’ baits all across Mosquito the past week or so as the post-Labor Day cool-down has invigorated the food chain and activated big predator fish.

Schools of shad and yellow perch are the feedstock for Mosquito’s walleyes, largemouth bass and northern pike. The U.S. Army Corps of Engineers has been pulling water through the dam, lowering Mosquito’s level and positioning the baitfish exactly where predators can pick them off.

That includes the northern pike that are prized by adventure anglers tempted by the prospects of catching trophy fish during Canadian expeditions.

Most of the local northern pike are caught by anglers fishing for other species. As prolific as pike have become in Mosquito, few fishers specifically target them. Those who do rouse the interest of a marauding pike often are startled by the ferocity of the attack.

Last week on Mosquito, I was working a surface buzz-toad bait. The lure is a soft plastic wide-body shape with a single tail that kicks up a fuss as it is reeled back to the boat. I was fishing an expansive flat with coontail growing out to five feet, working the lure so it passed over dark holes that I suspected held hungry bass.

The first strike of the day, however, was from an oversized northern that swooped up and across the lure. The attack was noisy and showy, with water spraying several feet around where the bait had formerly been gurgling. I set the hook more out of shock than anything and was rewarded with my line severed as cleanly as any surgeon’s scalpel cut.

Pike have teeth that are the envy of the fish world. They are numerous, needle sharp and capable of cutting just about any line a freshwater angler might employ, including the braid on my reel. That’s the reason pike aficionados typically rig with steel leaders.

I retrieved my limp line and tied on a new hook and twisted another buzz toad on the screwlock, only to lose it five minutes later when another “alligator” mistook it for a skittering shad.

I did boat two northerns that day, to go along with 13 largemouths. One of the pike stretched 39 inches and likely weighed 16 or 17 pounds.

But that fish would have paled in comparison to the monster pike caught that same weekend by Al Masaitis of Brookfield, who works as one of the angling experts at the Fin Feather Fur store in Boardman.

Masaitis boated a pike that stretched beyond both ends of the 45-inch-long deck lid over his boat’s battery and bilge compartment. The fish could possibly have been an Ohio record, but he released it unharmed.

The next two months will continue to serve up great pike fishing. They will be eating aggressively to build reserves of fat to sustain them during the coming cold winter.

Flashy bass baits will get the job done. Topwaters, spinnerbaits and lipless crankbaits are good choices for those who hope to work over Mosquito’s thriving pike population.

Fish the lures fast around stands of green vegetation and don’t be alarmed if the biggest fish you’ve ever caught attacks your lure — right here close to home.

Jack Wollitz is a lifelong angler who is particularly wary about big fish with sharp teeth. He appreciates emails from readers about their fishing experiences. Send a note to Jack at jackbbaass@gmail.com. 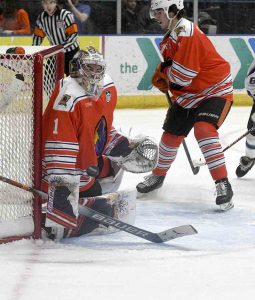 CLEVELAND — Andrew Berry may still have his parking spot with the Browns. After spending three seasons in ...

Winter is the season for the strategic planning meetings I conduct with myself after a busy year of fishing on all ...

BOSTON — Patrice Bergeron scored his 20th goal, Karson Kuhlman and David Pastrnak both had two assists, and the ...

CLEVELAND — The Browns passed on a chance to hire one of the Patriots’ coaches. Now, they’ll consider someone ...

MORGANTOWN, W.Va. — No. 12 West Virginia’s opponents don’t have to dribble the ball past midcourt to the ...