Valley throwers missed out on repeat 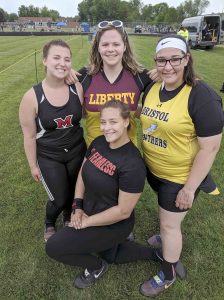 The four stood atop a podium inside the track and field facility at Massillon Perry High School in late May of 2019.

The four girls represented different schools at the Northeast Ohio Division III regional meet, but all four of the shot putters had something in common — they were from Trumbull County and, by virtue of finishing in the top four positions, qualified for the state meet in Columbus.

Claire Miller of Mathews, who was a sophomore last year, won the event. Juniors Alyssa Wilson of Liberty, Libby Barreca of Newton Falls, and Sydney Fenstermaker of Bristol also made it to state.

Those three had their opportunity to return to Columbus this season wiped out by the COVID-19 pandemic which resulted in the cancellation of all spring sports.

Standing next to one another that day helped remove thepressure of competing in a regional meet.

“It made it feel like home, and it felt like it was just another meet for us,” Barreca said.

Barreca was definitely the jokester. She’d say something and the laughs would flow through the group as they were getting ready to take the podium at Massillon Perry.

“It was really fun and it makes me smile just thinking about it,” Barreca said.

Standing there in front of the crowd that day was a much better memory for Fenstermaker.

“Even though I didn’t throw what I was hoping to throw that day, it was such an awesome feeling knowing that all of the blood, sweat, and tears, literally, was worth it,” she said.

Now they’re left wondering what might have been in 2020.

Wilson wanted to throw 38-39 feet to start the season. She was a foot away from the school record, something she wanted to break this season — and accomplish so much more.

“Since this was our senior season for most of us, I think it would have been pretty bittersweet emotionally,” said Wilson, who will throw for the University of Mount Union while pursuing a degree in biomedical engineering.

“Competition-wise, at least for me, since I’m planning on throwing in college, I think it would’ve felt like I have something to prove from the very beginning, to show that I was ready for the next level of commitment and competition.”

Barreca was hoping to reach 150 in the discus and over 40 in the shot put. Those numbers would have placed her in the top eight in both events and would have meant all-Ohio status last season.

She didn’t make it to state finals in either the shot put or discus last season. Barreca wanted this season as redemption. Last year’s state competition was her last as a competitive thrower.

“I got a couple offers to throw at a couple schools but I am not going to be throwing in college,” Barreca said. “I actually made the decision to forego college for now to pursue a career as an electrician, and I’m already super excited for that.”

Fenstermaker wanted to pass her shot put record of 42-2, maybe get into the mid-40s, along with throwing 130 in the discus — getting herself to the podium.

But there were no handshakes or other greetings this year. It became a year of what ifs.

She, like Barreca, is ending her track and field career.

“I have made the difficult decision to not throw in college,” Fenstermaker said. “I had a few opportunities, but I decided I wanted to focus more on my education.”

For all four throwers, the spring of 2020 was about what might have been, rather than a story of how the four throwers from northeast Ohio went to state again.

“I was super excited for this season,” Barreca said. “I had this vision in my head of us all going to state and making podium and then getting another article of the four of us of how we stuck together from last year. I thought we were all going to have phenomenal seasons.” 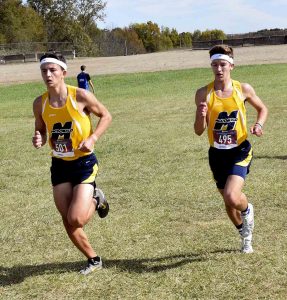