Malito had high hopes in track 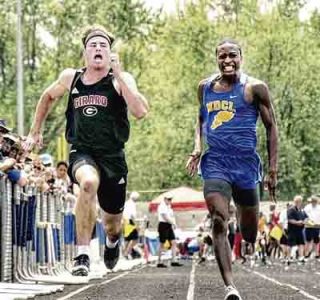 Malito, a Girard High School senior, finished eighth in last year’s Division II 100-meter dash at the state track and field meet. He was the defending Trumbull County boys long jump champion and district champ in the 100 and long jump.

Hetrick would’ve loved to seen what Malito would have done this season.

The COVID-19 pandemic has changed life as we used to know it and led to the Ohio High School Athletic Association canceling spring sports as track and field won’t return until 2021.

“It’ll be hard for us to replace him,” Hetrick said. “He could’ve very well been a three-, four-time district champ. I was hoping to see if he could win the county meet MVP this year.

Malito, a 6-foot-2, 205-pound wide receiver, signed to play football at the University of Louisville this fall. He had 120 receptions for 2,429 yards and 27 touchdowns during his career at Girard.

In track, he went 10.95 seconds to qualify for state last year out of the Division II Austintown Regional in the 100.

“I think track changed me as a football player,” Malito said. “The only person to beat is yourself. To go out every day and keep working to beat your own time and get faster and faster, I think that’s something every football player should do. Especially if you’re not playing anything else like baseball, you should do it to stay active and increase the stamina for games. Agility and quickness overall is a big factor.”

He was slated to run with football teammate Morgan Clardy this spring. They both ran during the indoor season, trying to hone their skills.

Malito had a personal best of 21-10.75 inches in long jump and went 7.09 seconds in the 60-meter dash, a good basis for the outdoor season — one that never happened during the coronavirus outbreak.

It wasn’t just him, but the Girard relays as well. The 4×100 relay won a district title last year with Malito.

“I was really looking forward to it,” he said. “I really think this could’ve been a very special season, not just for me, but for my team. I think we had a lot of great guys coming back for my boys team.

“I think we could’ve done something great with them.”

Malito remains in contact with Louisville on a daily basis, figuring out future plans — mostly academic. He said the Cardinals are shooting for June to start up football, but will wait and see what the NCAA finally deems necessary to a starting date for all programs.

Malito said he’ll be a business finance major and minor in sports management or administration.

Hetrick said not competing this spring should fuel Malito heading into his next step at Louisville.

“Coming into this year, the taste of going to state, he was excited to do bigger and better things from last year,” Hetrick said. “He wanted to do better. That just fuels his competitiveness. That’s what he’ll need at Louisville to succeed there.”