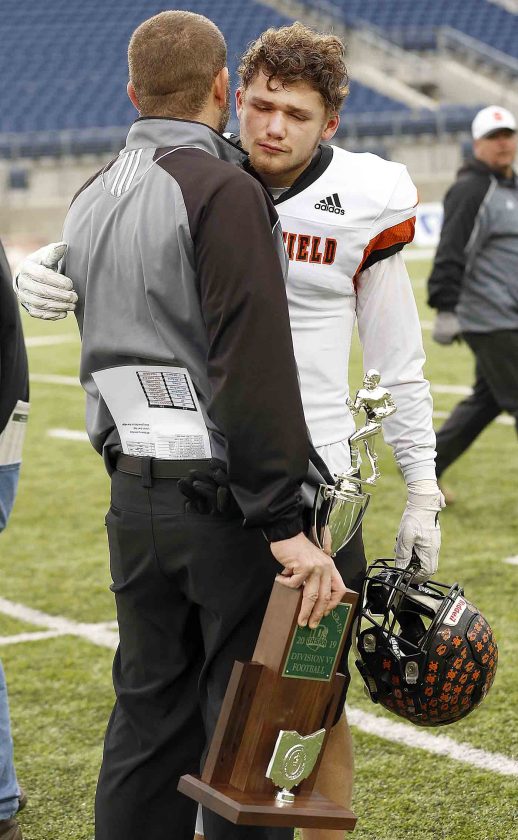 CANTON — It was the one moment Springfield coach Sean Guerriero wasn’t ready for at the Division VI Football State Championship on Friday.

He and the Tigers were well aware of the star-studded backfield of Anna High School. Guerriero knew the Rockets’ defense was going to blitz from all angles, and he understood their sound special teams play.

But as Guerriero stood near midfield at Hall of Fame Stadium following Springfield’s 48-14 defeat to Anna, awaiting the runner-up trophy, he wasn’t sure how to react.

“It’s hard to prepare for things of that nature,” said Guerriero, whose emotions were torn after his Tigers set a new standard by reaching the state championship for the first time yet came up short. “For us, we’ve been going for 17, 18 weeks. We’re going to have to take a step back and just see the accomplishments that we ended up making this year. It’ll be a little more time, and then we’ll accept it. 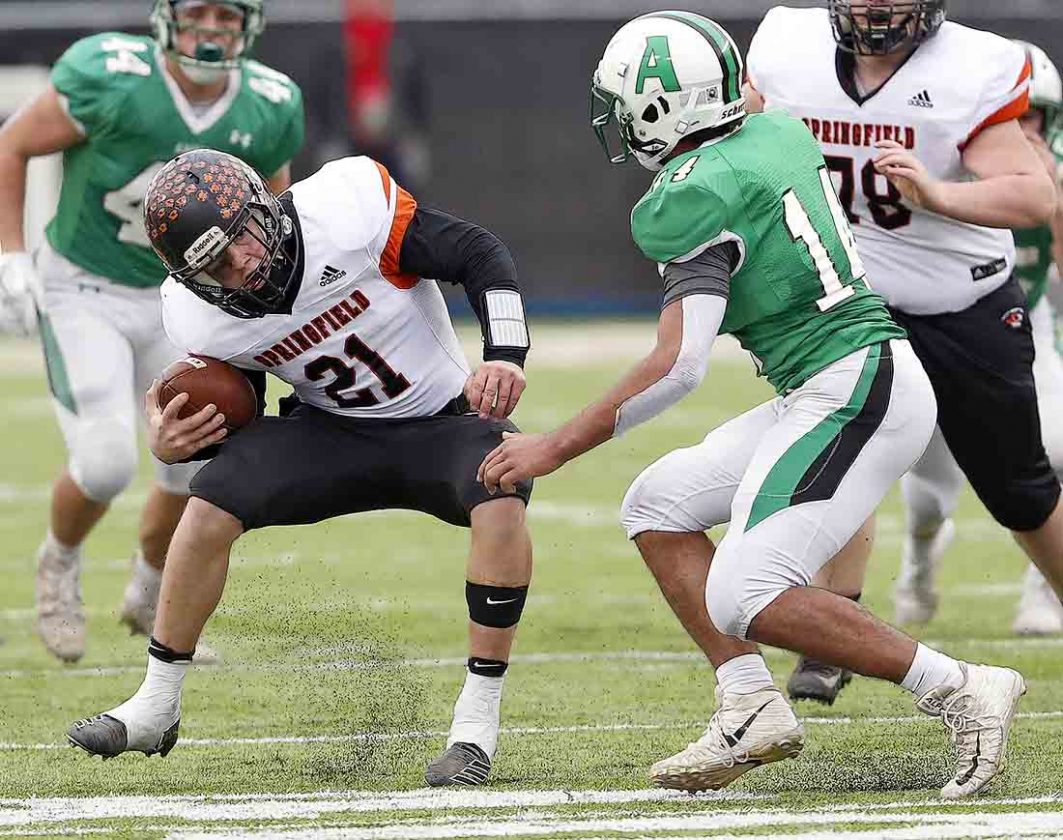 The game seemed to get away in a hurry, too.

The Tigers (14-1), who had overcome deficits multiple times during the playoffs, trailed Anna, 21-0, before they knew what hit them. Springfield fumbled a punt inside its own 15-yard line midway through the first quarter, which led to 2-yard score by Anna standout running back Riley Huelskamp,

The Tigers then had a punt travel just 10 yards to set up the Rockets’ second score, a 4-yard TD by quarterback Bart Bixler early in the second quarter. A second fumble, this one from standout Springfield QB Beau Brungard on the ensuing drive, resulted in a 38-yard TD pass from Bixler to Nolan Emerson on the next play.

And it was 21-0 before Tigers fans had reached their seats.

“When you’re down that much, obviously there’s going to be a lot of pressure,” said Springfield wide receiver Garrett Walker, who caught eight passes for 106 yards. “But I think we do a very good job of staying level-headed and coming out of that doing our best to fight back. We’re never going to be a team that’s just going to give up.” 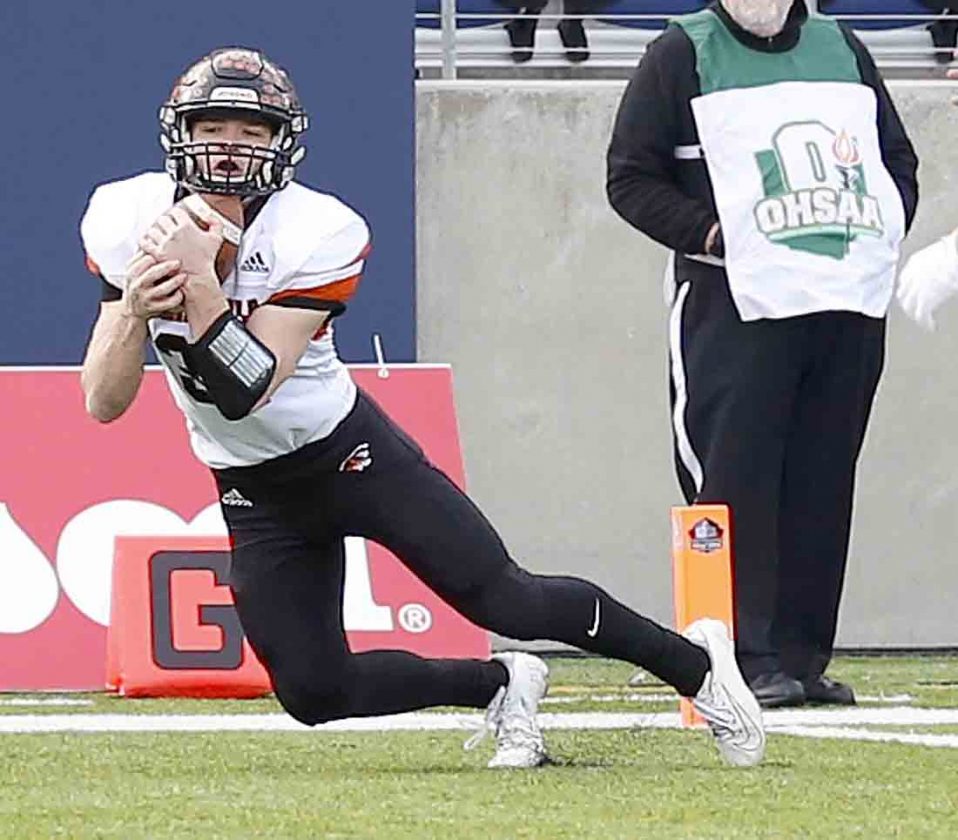 Correspondent photo / Michael Taylor Springfield’s David Duvall makes a diving catch in the end zone in the second quarter of the Tigers’ 48-14 loss to Anna in the Division VI state title game at Canton.

The Tigers engineered a 15-play, 72-yard drive that was capped by a phenomenal catch by Evan Ohlin, who made a juggling grab around a defender for a 7-yard TD.

It took the Rockets (14-1) just four plays to strike back.

Springfield had Anna backed up to its own 9 and facing second-and-18, but Bixler ripped off an 18-yard run for a first down, and on the next play, Huelskamp cut back on the Tiger defense and darted up field for a 72-yard TD and a 28-7 lead. He ran for 146 yards and three TDs in the game, while Bixler added 168 yards and two TDs.

The Rockets’ line was as dominant as the backfield. 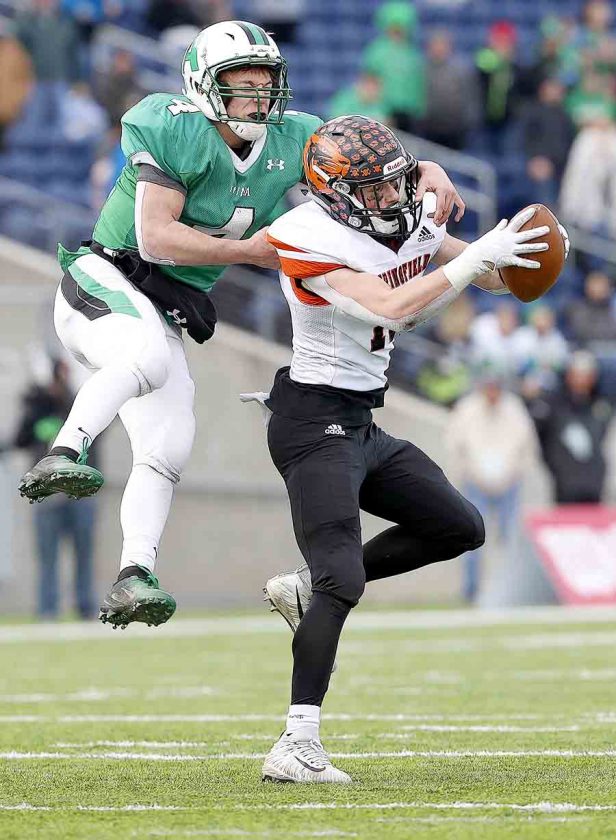 “Both backs are good,” Guerriero said. “It still starts with the O and D line. Their O-line was good, and you could see that on film. Both (Huelskamp) and Bixler were two great backs, and we knew we were going to have a challenge trying to tackle them.”

Springfield still found a way to get back into the game.

With just 2 minutes, 56 seconds left in the first half, the Tigers drove 70 yards. They converted a fourth-and-15, with Brungard firing a 24-yard pass to Walker, who made a great catch in traffic for a first down. Then, on third-and-15 from the Anna 16-yard line, Springfield reached into its bag of tricks.

The Tigers ran a double reverse and then flipped the ball back to Brungard, who calmly tossed a perfect touch-pass to David Duvall for a touchdown. The score made it 28-14 with just 25 seconds left in the second quarter, and Springfield, which also received the second-half kickoff, suddenly had all the momentum going into halftime.

“I knew our team was going to respond,” Guerriero said. “When we came in at halftime, knowing we were going to get the ball, and if we can put a score up there, it’d be 28-21, we felt like we were in the hunt. 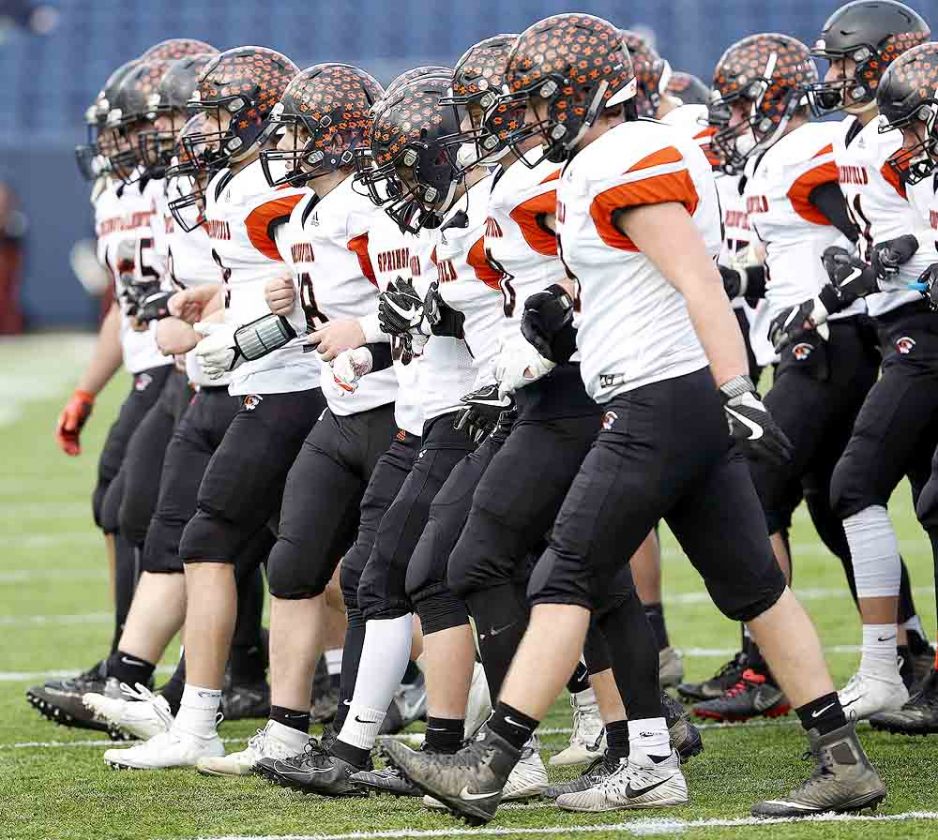 Correspondent photo / Michael Taylor Springfield walks off at half time.

“… We had to make a play, and it seems like we’ve always made a play when we needed one. We just couldn’t get that momentum going to really put us over the edge. With turnovers and penalties and things of that sort, we didn’t really give ourselves a chance to succeed today.”

It was a turnover, and the do-it-all play of Huelskamp, that sealed their fate.

The Tigers faced third-and-8 on the opening drive of the third quarter, and Huelskamp, a safety on defense, jumped a Brungard pass, rumbling 32 yards for a touchdown and a 34-14 lead. Springfield’s next drive stalled in Rockets’ territory, and Anna poured it on from there.

While the Tigers turned the ball over four times (two fumbles and two picks) and allowed nearly 400 yards rushing, they also ran for just 21 yards on 26 rushes. They were forced to throw the ball a season-high 35 times and couldn’t solve the fast and physical fronts of Anna, which was the eighth team in the powerful Midwest Athletic Conference to win a state title — but the first for the Rockets.

This was also Springfield’s first time reaching the state final, and it was a ride none will soon forget. 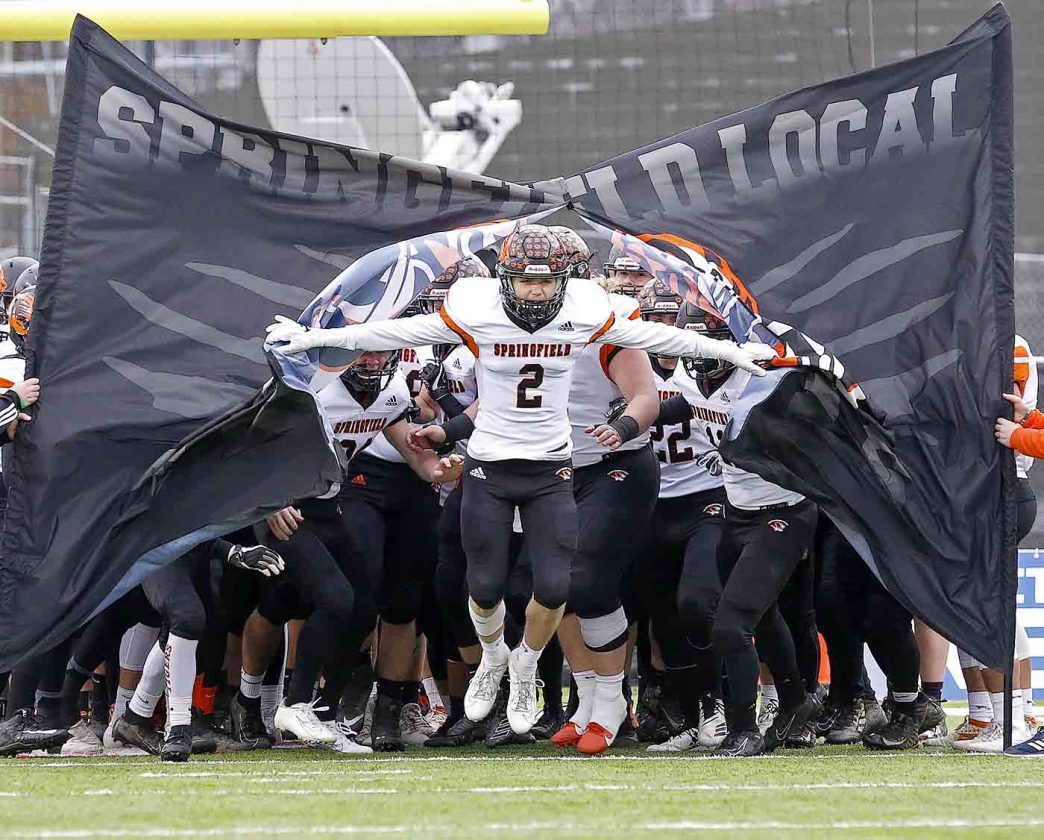 “Our community has been fantastic,” Guerriero said of the support. “The Mahoning Valley has been great. I was almost in tears on the bus, just to see how many of these people have embraced us and pushed them throughout the past five weeks. I couldn’t thank them enough for the point that we ended up making and the point where we’re at.” 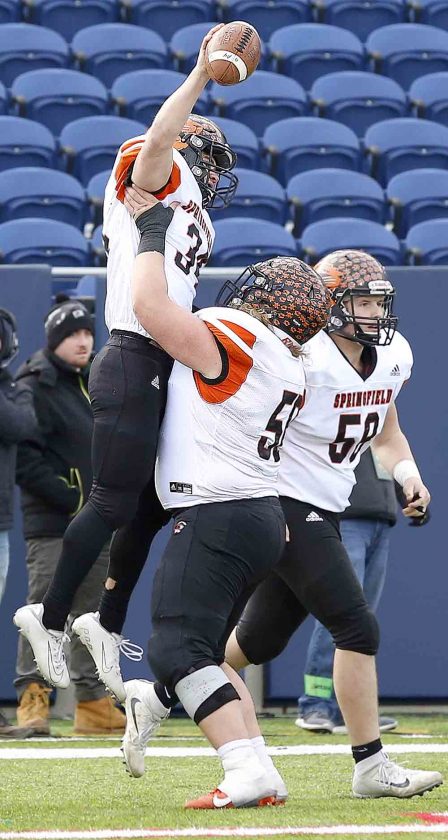